In ‘Oslo’ peace is a process, not a destination

In ‘Oslo’ peace is a process, not a destination 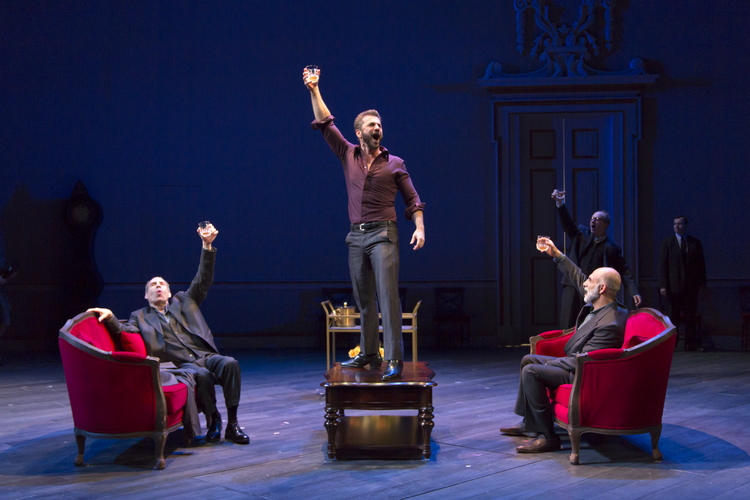 The path to peace, like the course of true love, never does run smooth, not least because the destination is far from assured. How many wars have flared on the flint of failed treaties? This bittersweet uncertainty about the outcome may account for the unique suspense and pathos of “Oslo,” the new play at Lincoln Center Theater that took home the award for best play at the Tony Awards against some fierce competition in one of the better seasons for new American straight plays on Broadway in memory.

Suspense may sound like an unlikely quality for a play about a seemingly foregone conclusion. As we watch the backstage machinations of the secret talks between Israelis and Palestinians that gave rise to the Oslo Accords of 1993, we know in advance the story’s two endings: both the historic handshake at the White House between Yitzhak Rabin and Yasir Arafat, and the collapse into violence that would follow—not to mention the metastasizing conflicts all across the Arab and Muslim world that have since challenged and in many cases overwhelmed all diplomatic alternatives. But like all the best historical narratives, “Oslo” shows the intense fragility and contingency of human affairs, even in matters large and consequential. Players with clear ideological intentions and well laid plans can seldom bend outcomes to their will—indeed, it is all too often the improvisers and situationists who end up at the steering wheel of world events, and it is hard to say their record is worse than the ideologues’.

Principled planners who can improvise may be the best bet in this realm, and that handily describes the two charmingly anxious Norwegian married academics, Terje Rød-Larsen (Jefferson Mays) and Mona Juul (Jennifer Ehle), who are the improbable heroes of J. T. Rogers’s play. In 1992, after witnessing firsthand the agonies of the intifada in occupied Gaza, Larsen and Juul made a small gamble with huge implications. While official public talks between Israelis and Palestinians were grinding fruitlessly on, the Norwegians made a breakthrough by gingerly introducing proxy negotiators for intimate, circumscribed talks under the radar, which blossomed in remarkably short order into full-fledged peace negotiations with authorized parties.

Like all the best historical narratives, “Oslo” shows the intense fragility and contingency of human affairs.

How did they do it? As Rogers’s play has it, with a combination of principle, savvy and some quick tap dancing. Larsen’s core idea may sound hopelessly idealistic: He believes that if the two sides can get to know each other as human beings, just talking in a room, they may start to see what they have in common. But it is the granular realization of that shared humanity—the food and alcohol and cigars that are strategically proffered, the off-topic jokes and confidences that spring up in the remote location, the deft finessing of foibles and misunderstandings—that gives the play its shape and surprise.

With the help of Bart Sher, the director, and a brilliant ensemble cast, “Oslo” manages to be true to the desperate, in-the-moment urgency of the unfolding events and alert to their human comedy. Indeed, with its twists and feints, broad strokes and fine details, Rogers’s play has both the momentum of farce and the sobering circumspection of high-stakes drama. That is almost as remarkable an achievement of boldness and tact as the accords themselves.

Lasting peace in the Middle East seems to haves grown ever more remote since then. If the practical idealism of “Oslo” suggests anything to our bleak present, it may be that peace is a process, not a destination. And try as we might to imagine otherwise, we are stuck with each other, in all our cracked, pied humanity. So why not break bread and talk it out?

This article also appeared in print, under the headline “In ‘Oslo’ peace is a process, not a destination,” in the July 10, 2017, issue.