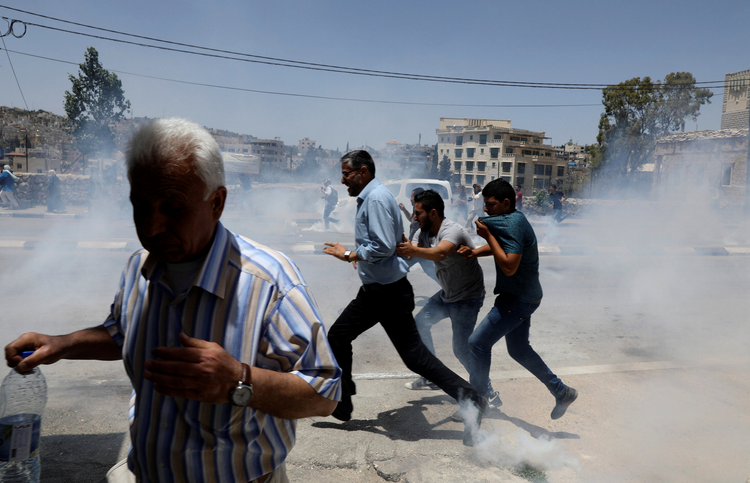 Palestinian protesters run for cover from tear gas fired by Israeli troops in clashes on May 15 during a protest in the West Bank town of Bethlehem marking the 69th anniversary of their uprooting. Palestinians call the 1948 uprooting "nakba" or catastrophe. (CNS photo/Ammar Awad, Reuters)

“The local Church in Israel-Palestine has the responsibility of reminding the Universal Church that Israel-Palestine is an open, festering wound and that the situation cannot be considered normal,” the Commission for Justice and Peace of the Catholic bishops of the Holy Land states in a document issued in Jerusalem on May 14.

An informed source in the Holy Land told America that the 1,000-word text was developed to answer questions of the faithful at home and abroad regarding the question of “normalization” of relations between Israelis and Palestinians, given that there is today a variety of responses to the realities of Israeli statehood and the continuing realities of occupation and discrimination. In parts of the Arab world any contact with Israel or Israelis is condemned as normalization, while in parts of the Western world, the cry for justice of the Palestinian people is deemed terrorism, the source said. The question therefore arises, “where should the Church stand and how can she continue to work for justice and peace?”

The document seeks to answer this question from the perspective of the local church in Israel and Palestine. Significantly, it states that “in both societies, Israeli and Palestinian, the life of the Palestinians is far from normal and acting ‘as if’ things were normal ignores the violation of fundamental human rights.” It underlines the fact that “the Church can never ignore injustice ‘as if’ all is well but rather is obligated to speak out, resist evil and work tirelessly for change. Like the prophets of old, the Church, a prophetic body, points out injustice and denounces it.”

The conflict is almost certain to be on the agenda for discussion when President Trump comes to the Vatican.

The statement is timely, coming as it does on the eve of President Donald J. Trump’s visits to Saudi Arabia and Israel and his meeting with Pope Francis and top Vatican officials. Since the Israel-Palestine situation is one of utmost concern to the pope and the Holy See, it is almost certain to be on the agenda for discussion when president comes to the Vatican.

The following is the full text of “The Question of Normalization”:

What is normalization in the Israel-Palestine context? At its most basic level, “normalization” is the establishment of relations with the State of Israel, its organisms, and citizens “as if” the current situation is normal, thus ignoring ongoing war, occupation, and discrimination, or consciously obscuring or marginalizing them.

The subject of “normalization” constitutes an important part of the political debate in the Arab world today, and most especially in Palestine, concerning attitudes to adopt towards the State of Israel. Opposition to normalization and accusations of normalization are heard regularly with regard to governments, non-governmental organizations, and individuals.

In fact, the political situation in Israel Palestine is far from normal, being marked by the ongoing conflict between two peoples, Palestinians and Israelis. This conflict has a profound impact on daily life in the two different entities: the State of Palestine and the State of Israel defined by the pre-1967 borders.

In the State of Israel, all citizens, Jews and Arabs, have equal rights in principle, but in reality, Arab citizens are discriminated against in various fields and in various ways: in access to development, education, jobs, public funding for Arab municipalities, etc. Some of these forms of discrimination are embedded in legislation, but others are indirect and hidden.

In the State of Palestine, in spite of the existence of the Palestinian Authority, Palestinians continue to live under military occupation, which determines their daily life: settlement and road building, legalization of Israeli construction on private Palestinian land, military incursions, assassinations, arbitrary arrests, administrative detention and collective punishment, confiscation of land, destruction of houses, checkpoints limiting the freedom of movement and creating numerous obstacles for economic development and the prevention of family reunification, a violation of the natural right of members of the same nuclear family to cohabitate together.

In both societies, Israeli and Palestinian, the life of the Palestinians is far from normal and acting “as if” things were normal ignores the violation of fundamental human rights. At the same time, in both situations, daily life requires certain relations with the Israeli Authorities. However, all persons and institutions involved in maintaining these relations should be aware that something "abnormal" needs to be set right rather than allowing the “abnormal” to become the order of the day.

In Israel, Arabs who hold Israeli citizenship interact with the civil authorities and are represented in the Knesset. There are over 300,000 Christians who live in Israel (Arab citizens of Israel, Hebrew speaking Christian citizens of Israel and long-term resident labor migrants and asylum seekers). Citizens and long-term residents are law abiding yet they have the right and the moral obligation to use all available legal and non-violent means to promote full rights and complete equality for all citizens. Ignoring or marginalizing this duty is “normalization,” collaborating with structures of discrimination, the permanence of injustice and the lack of peace. Within this context, the Church is obligated to ensure the smooth running of parishes, schools, and many other institutions, obligating interactions with all those that administer the territories within which the Church is active. This, however, must never obscure the Church’s commitment to justice and her denunciation of all injustice.

In Palestine, the Palestinian Authority is compelled to coordinate with the Israeli Authorities in order to be able to function. Yet, Palestinian citizens have very limited control over their own lives, need Israeli permits and approval for many aspects of daily existence—for example, visiting the Holy Places in occupied Jerusalem, building homes and businesses in Israeli controlled areas of Palestine and having access to Palestinian institutions (parishes, schools, hospitals) in occupied Jerusalem. The Church as well, for the requirements of her daily life, cannot live and work without applying to the Israeli Authorities for permits and visas. The Church has the moral obligation to constantly discern between what is unavoidable in maintaining relations with the occupying power to ensure these daily necessities and what must be avoided, i.e., engaging in relations and activities that promote a consciousness that “the situation is normal.”

The Church, given the nature of her mission, has her own values and criteria to define her position in a situation of conflict, like the one in Israel-Palestine. No single brand of political discourse, no particular party position nor any particular ideological option binds the Church. However, at the same time, the Church cannot ignore fundamental injustice or acts that endanger peace and the welfare of the human person. By her very nature, the Church opposes occupation and discrimination and is committed to promote justice and peace as well as the unique dignity and equality of every human person. The Church can never ignore injustice “as if” all is well but rather is obligated to speak out, resist evil and work tirelessly for change. Like the prophets of old, the Church, a prophetic body, points out injustice and denounces it.

There is, therefore, an important intersection between political discourse that opposes normalization and the Church’s position with regard to situations of injustice. The Church works with all who share the values she proclaims; whatever human group they might belong to, whether Palestinian or Israeli. The Church seeks and encourages dialogue with all people, including Israelis, individuals, and organizations, who recognize the need to end occupation and eliminate discrimination. The Church is committed to identifying these individuals and organizations, all those who do not perpetuate the situation by presuming that dialogue or cooperation can ignore the struggle to achieve justice, thus hiding the unjust realities that define the daily lives of those living under occupation or those facing the restraints of discrimination. The Church is committed to identifying partners and developing constructive strategies in collaboration with them in order to repair our broken world. Furthermore, the Local Church in Israel-Palestine has the responsibility of reminding the Universal Church that Israel-Palestine is an open, festering wound and that the situation cannot be considered normal.

In the present confused and hopeless political situation, Christian communities, Church leaders and individual believers, are in need of ongoing discernment. They are invited to consult and work closely together in order to find the best ways to testify to a just and equal society for all, while cultivating respectful relations with all their fellow citizens, with whom they are called to live together, working together for a lasting and just peace.

Excellent report. Presenting the full text of the statement is a good decision.