The uncertain future of parish life 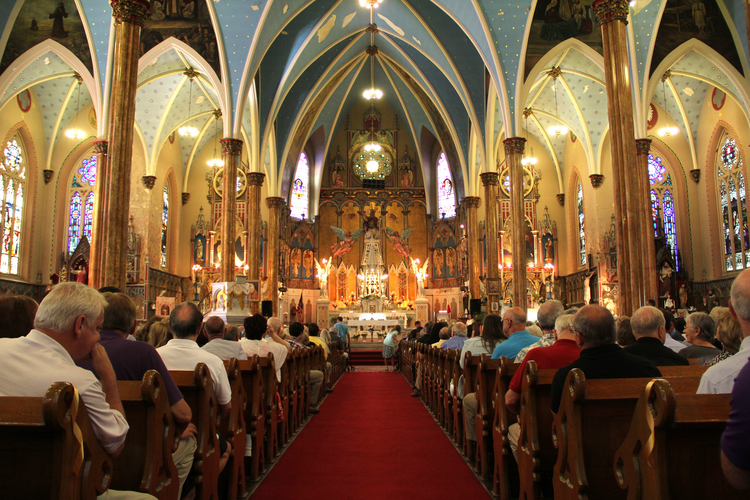 One of the most striking things in America’s article (Mar. 6) about St. Michael’s, in Axtel, Kan., is how atypical the parish is in today’s Catholic church. Having a stable population in a small town, with a pastor who has been there for some time and knows everybody by name, is not representative of most parishes. But recent books about parish life and leadership give us a more comprehensive picture.

Great Catholic Parishes by William E. Simon Jr., based on interviews with 244 pastors of parishes designated as healthy and vibrant, identified four essential qualities that these communities have in common: sharing leadership; fostering spiritual maturity and planning for discipleship; “excelling” on Sundays; and evangelizing in intentional, structured ways.

Written by the staff of CARA led by Charles E. Zech

Over 80 percent of the pastors interviewed had some form of structured shared leadership, and many praised their professional lay leaders as among their most valuable assets. (There are about 40,000 lay ecclesial ministers active in parishes today.) Fully 90 percent of the pastors identified the spiritual growth of their parishioners as the biggest strength of their parishes, and many of them made use of some widely available programs. (Simon lists a number of these but surprisingly omits Renew International.) Spiritual growth increases participation in parish life and leads to a greater sense of discipleship.

On the third essential practice of great parishes, 76 percent of the pastors described vibrant, welcoming Sunday liturgies as crucial. But these require thorough planning and a well-organized group of volunteers. Hospitality and attention to the needs of children are also critical to success on Sundays. The problem is that so many Catholics no longer attend Sunday Mass on a regular basis (more on that below). Finally, slightly more of the pastors mentioned evangelization as an area needing growth than listed it as a strength. Many felt that the whole parish needs to be on board to sustain an evangelizing culture, and many mentioned Pope Francis as a model of evangelization.

William J. Byron, S. J.,, reinforces the notion that parish leadership must be shared in his recent book Parish Leadership: Principles and Practices, but he adds that the leadership must integrate Catholic social teaching in the life of the parish for it to be effective. (He also provides an excellent, succinct summary of Catholic social teaching in his second chapter.) For Byron, parish leadership, especially the pastor, must be “servant leadership” rather than the top of a pyramid, as the latter is abnormal and corrupting.

A much more comprehensive study of Catholic parishes is Catholic Parishes of the 21st Century by the staff of the Center for Applied Research in the Apostolate (CARA), led by Charles E. Zech. Synthesizing data from a number of recent surveys, the authors use the 1989 Notre Dame Study of Catholic Parish Life as a baseline of comparison. Trends that had begun at that time have continued and intensified, but the operative word in both studies is change. Following are the most significant changes in the last 30 years:

—The U. S. Catholic population has moved from the Northeast and upper Midwest to the South and Southwest, leaving empty, old and decaying physical plants in urban centers in the Northeast (e.g., Buffalo closed 97 parishes between 2000 and 2010) and large populations in the South are without churches (Atlanta added 10 new parishes during the same period). People move but parishes do not. Overall, the number of parishes in the United States declined from 19,559 in 1990 to 17,337 in 2015 while the Catholic population increased proportionally, remaining at about 25 percent of the total U.S. population. There is a clear mismatch between the people and the physical plants.

—Although the priest shortage had already begun by the time of the Notre Dame study in 1989, it has accelerated since then. In 1990, there were just over 34,000 diocesan priests in the U.S.; in 2014 there were 16,462 active diocesan priests. In 2014, 3,448 parishes were without a resident priest. Parish leadership has been supplemented by permanent deacons (there were more than 18,000 in 2014) and an amazing increase in lay ecclesial ministers (up to almost 40,000 in most recent estimates).

—There has been a major increase in cultural/ethnic diversity in the American church. In the 1980s, foreign-born Catholics were just above 10 percent of the U.S. Catholic population; in 2014 this category had increased to 25 percent, or 16.8 million people. Much of this immigration is from Latin America, but there are also foreign-born Catholics from dozens of countries across Asia and Africa. About a third of all Catholic parishes serve a particular racial, ethnic, cultural and/or linguistic community, and some serve two or more of these communities. This has contributed to “parish hopping,” or “parish shopping.” In any case, cultural diversity represents the future of the church in the United States

[T]here is a widespread reconfiguration (closing, merging, clustering) of parishes underway in the United States, with a concomitant change in the expectations of leadership.

As a result of all of the above, there is a widespread reconfiguration (closing, merging, clustering) of parishes underway in the United States, with a concomitant change in the expectations of leadership. Sometimes this entails a single priest pastoring several parishes; other times it means a team of priests who share responsibility for several parishes; and in still other cases parishes are entrusted to deacons or laypersons (the number in this category peaked at 566 in 2004) or to parish life coordinators (369 in 2015). Parishes are becoming larger and more complex—a far cry from the rural parish in Axtel, Kan.!

What kind of men are the priests?

These changes in parish life in the last 30 years pose significant challenges to parish leadership for the foreseeable future. Are we in fact preparing men for these changing forms of leadership? Another recent study of seminary formation at the theologate level by Katarina Schuth, Seminary Formation: Recent History, Current Circumstances, New Directions, gives a picture of what we can expect. Analyzing a wealth of data leads to some disturbing conclusions.

Schuth writes, “The capability of the church in the United States to meet the spiritual needs of the growing and changing Catholic population depends on the qualities and numbers of men and women preparing for ministry.” For the past 20 years there have been barely 500 ordinations a year; meanwhile the Catholic population has grown from 47 million to 71 million since 1967. This mismatch is one of the factors in the reconfiguration of parishes and will only increase as the older clergy die or retire.

There has also been increasing emphasis on priestly identity and ministry, with seminarians taking courses separately from lay students (which is more true in diocesan seminaries than in schools of theology operated by religious orders). Furthermore, it seems that most bishops chose seminaries where this is so. Keeping seminarians separate from lay students is hardly helping to prepare them for collaborative leadership when they are ordained. There is a generational divide between the older priests who exemplify the “servant leader” model and younger ones representing the “cultic model” who see themselves as set apart from their lay colleagues.

In one of the book’s commentaries, Ronald Rolheiser, O.M.I., a longtime seminary rector, mentions that today’s seminarians are not being prepared to be spiritual guides, to give one-on-one spiritual direction or to guide people in prayer and discernment. (Recall that spiritual growth is the second essential characteristic of Great Catholic Parishes, mentioned above.). He is also concerned that today’s seminarians do not have enough contact with the poor and are less interested in ecumenism and interfaith dialogue, being inclined to minister only to their own kind.

Taken together, these books raise some basic questions: Is the People of God ecclesiology of Vatican II being eclipsed by an older, more hierarchical ecclesiology among seminarians and younger priests? What model of church is operative for them?

And with only 18 million out of 78 million self-identified Catholics attending weekly Mass, is the territorial parish the only or even the most suitable basis for Christian communities today?

Religious education is broken. It's time to fix our Sunday school culture.
The Editors

Some years ago, Karl Rahner pointed out that “the parochial principle has never governed alone in the history of the Church’s pastoral ministry,” and he goes on to mention wandering apostles, the monasteries, the missionary migration of monks, the mendicant orders, the sodalities and confraternities and other forms of “extraparochial” ministry. In today’s highly mobile and urbanized societies, which increasingly include Asia and Africa, geographical proximity is not the basis of communal life. In contrast to the small town in Kansas mentioned above, people living in urban high-rises or in sprawling suburbs do not even know their neighbors. City parishes are so large that there is no sense of “neighborly togetherness.” The territorial parish today is not what it was in the past.

Some dioceses have been trying to imagine some combination of worship communities, resource communities and small communities for education and evangelization. The goal should be the pastoral care of all of the people, not the maintenance of earlier forms of ecclesial organization. Should we continue to build new large physical plants which will be empty 30 or 40 years from now? We need a new, creative, more imaginative approach to serving the pastoral needs of the people of God than the parochial principle inherited from the village and agrarian societies of the past. Axtel, Kan., is not a model for tomorrow!

This article also appeared in print, under the headline “The uncertain future of parish life,” in the July 10, 2017, issue.

T. Howland Sanks, S.J., is the professor emeritus of theology at the Jesuit School of Theology at Santa Clara University.