Religious education is broken. It's time to fix our Sunday school culture. 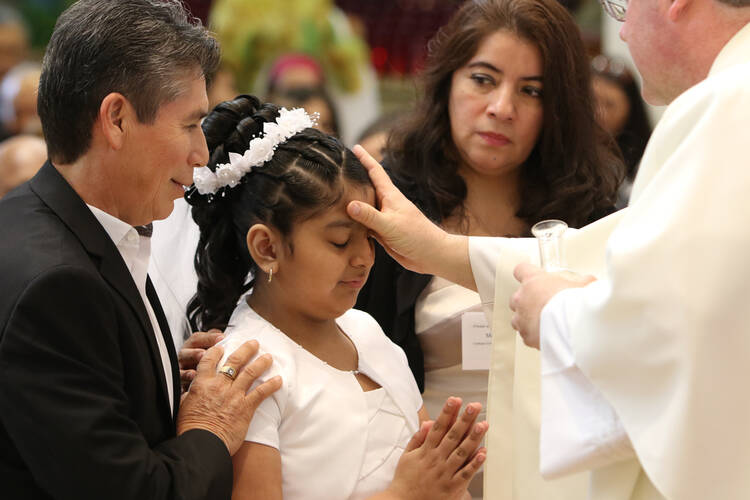 Erika Gallegos, 9, is confirmed by Father Christopher Nowak during a Mass at St. John of God Church in Central Islip, N.Y., April 11. (CNS photo/Gregory A. Shemitz)

A public school with a dropout rate of 50 percent and two-thirds of area parents opting out of it would be considered failing. If the school were unable to turn those numbers around in a few years, it would likely be shut down. And yet for decades, Catholic parishes in the United States have invested in religious education programs that have proven no more effective. Today, more than half of Catholic millennials report going to Mass a few times a year or less, and, according to a 2014 poll, 68 percent of Catholic parents decide not to enroll their child in any formal Catholic religious education.

To say that there is a crisis in religious education in this country is not to discount the profound generosity of many volunteers and teachers who sustain parish programs around the country. If their dedication were the only factor determining success, there would be no problem. Yet in many if not most settings, religious education is not accomplishing its purpose: to hand on the faith from generation to generation. Both surveys and our experience tell us the U.S. church is reaching a possible breaking point in that chain. Ineffective catechesis—whether in the parish setting or in Catholic schools—is not the sole cause of the rise of the so-called nones; but for the most part, religious education as presently conducted does not give these young people a compelling reason to believe.

The first step is admitting there is a problem—and any parent who has dragged a squirming fifth grader to an hour of Sunday school can say what it is: Most 10-year-olds do not want to spend their weekend in a classroom. More fundamentally, the assumptions built into the current system of religious education, developed at a different time and in a different cultural context, no longer hold. There was a time when religious belief and self-identification were default positions, supported by social norms. But today, when young people are surrounded by a culture in which choosing to believe is more and more a revolutionary act, religious education must do much more than hand on the basic tenets of the faith. Unless the option of belief is made real by family and community relationships that offer examples of true Christian discipleship, creedal affirmations are taking root in rocky soil.

The good news is that innovative models of catechesis that look beyond the classroom, like family-based religious education, Catechesis of the Good Shepherd and programs that center on small group discussion and service, have shown great potential. What seems to be the key is that these models are not just about education but formation. They work to make discipleship tangible and imaginable first, rather than focusing on transmitting the content of the faith. Not coincidentally, they can also be resource-intensive, requiring greater involvement and investment on the part of families, parish staff and clergy. No program, however, can ever replace the central role of parents as “the principal and first educators of their children” (Catechism of the Catholic Church, No. 1653). We must also discern how to form parents for this mission.

Changing “Sunday school” culture and Catholic schools’ religion classes into a relational process of faith formation is no simple task. It will require church leaders to admit that the path we have been on for decades is not sufficient to respond to today’s needs and cannot be fixed merely with different books, better curricula or more training. And it will require parents to demand and to help build parish communities that not only teach the faith but live it out joyfully. “Let the little children come to me,” Jesus said, “and do not hinder them.” Now is the time for the church to reflect on these words and move urgently to develop religious formation programs that introduce children to the person at the heart of our faith, who desires not only well-informed students but lifelong disciples.

My thoughts echo yours, Dan. I, too, believe that parish leaders have much to consider in the way catechesis is shaped, especially in the ways we do, or more often, do not, offer significant processes for adult evangelization and faith formation. Catechesis is only one aspect of the life of the parish, however, and focusing on it to the exclusion of all other elements fails to serve Christ and the Church. As I talk with diocesan and parish leaders throughout the United States and Canada about this, I sense a new energy and desire to truly evangelize -- to lead people to an encounter with Christ and to live as disciples in the world. Our people are seeking such engaging parish life. It is up to us to continue to ask hard questions of ourselves and to risk new approaches in order to live as people of faith in this new and demanding time.

This editorial almost made me cry. My wife and I made the faith central in raising our four children. We went beyond obligations and joyfully observed feast days and and received the sacraments. We also did what we were told to do regarding religious education: we dragged our children to Sunday school for almost three decades, clawing our way to Confirmation, which was held like the carrot on a stick until 11th grade. I wrote to three different Bishops begging for a change. I spoke once with a nun who was the director of religious education for our Springfield, MA, diocese. She admitted to me that "we do lose a few along the way," as if we were speaking of something expendable, like tomatoes. One bishop insisted to me that programs that he visited throughout the diocese were vital and producing life-long Catholics, even as I observed first Communion classes of 20 produce 3 or 4 Confirmations. What child who spends all week in school wants to spend an hour and a half in a cold parish center room on a Sunday morning? I'm convinced that religious education is the major factor in why my adult children have rejected the faith. My frustration is boundless. I hope that things can change for young parents and children today.

What is the purpose of religious education? to make us Catholics? to make us believers? to make us disciples? Those sound as dry and boring as the Catechism classes of my pre-Vatican II youth.

Religious education should be about becoming a saint, the unique saint that God has destined each of us to be. As Merton put it in a letter to Mark Van Doren “..my own individual destiny is a meeting, an encounter with God that He has destined for me alone. His glory in me will be to receive from me something He can never receive from anyone else –because it is a gift of His to me which He has never given to anyone else & never will.”

Fortunately a lay high school math teacher in my public school gave me a copy of Merton’s Seeds of Contemplation setting me on the right path. I also had saints for parents. Mom had a great love of beauty and cared for many people. Dad found his identity in mechanical work and great respect for others including those who were far less skilled than he. Neither had much formal knowledge of the faith beyond their Sunday Missals.

We certainly need the help of other people in becoming saints. Books sometimes help. I don’t know if we need a whole lot of programs.

Jack, you are on to something but it's not what you think. Lean not on your own understanding (or Merton's) but trust in God alone & he will direct your path (Proverbs 3:5-6). All genuine believers are already saints - just read how Paul addresses the churches of Ephesus, Philippi, & Colossae! People can't help people become saints & you're right - programs don't either. One book can help however - the Bible , the very inspired Word of God!

yeah..probably hundreds of years ago religion was about something bigger than ourselves but now it looks like majorly it is about ourselves and how to feel good about yourself and such people are teaching us..unfortunately..rarely there are those who simply believe in God without any questions asked..they are ready to give and not receive nothing in return..but like I said that's a rarity..and sometime i feel like church in certain places is becoming more about the money than God
humble thoughts of a research paper writer xo-xo