A new path for unions in America 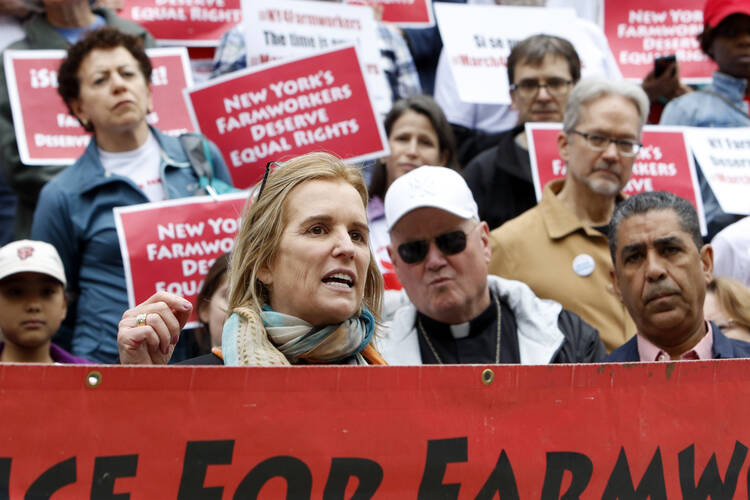 Human rights activist Kerry Kennedy speaks at a rally, May 21, 2016, at New York City Hall during the March for Farmworker Justice (CNS photo/Gregory A. Shemitz).

In his classic song “The River,” Bruce Springsteen’s narrator sings mournfully of the humble gifts he received for his 19th birthday: “a union card and a wedding coat.”

These days, a 19-year-old—or anyone in the private sector, for that matter—with a union card is a rare creature indeed.

Union leaders call this the “seven percent problem,” a reference to “the percentage of private sector American workers who belong to unions,” Jonathan Rosenblum writes in his feisty, provocative book Beyond $15: Immigrant Workers, Faith Activists and the Revival of the Labor Movement. Rosenblum is a veteran labor organizer, and a sizeable chunk of this book chronicles what he dubs the first successful campaign for a $15 hourly wage in SeaTac, Wash.—so named because of its proximity to Seattle-Tacoma International Airport.

Beyond $15by Jonathan Rosenblum

Rosenblum and others sought “to organize and win good working conditions for thousands of...workers who occupied the bottom rung of the airport economy.”

He adds: “The positions were held largely by new immigrants who had flocked to the Pacific Northwest from all corners of the earth, escaping economic privation, wars, famine and political repression.”

You will learn as much as you ever wanted to know (and much more) about the airline industry and its cozy relationship with Congress in Rosenblum’s book—but he is also after something bigger.

“There’s no shortage of pundits and elites...who conclude that because inequality is inevitable in modern-day capitalist society, political and social justice activists should content themselves with promoting policies that merely cushion the blow for workers and communities,” writes Rosenblum, who disagrees emphatically.

The bigger problem, he believes, is the inherently destructive nature of “leaders of big business and finance [who] have imposed their designs on the rest of us through their disproportionate economic, political, and cultural power.”

The November 2016 election is not mentioned in Rosenblum’s book, but an obvious question arises in light of it: If so many millions (if not quite a popular-vote majority) are willing to elect a blustering personification of capitalism as president, then is this really an opportune time to talk about upending American capitalism? Especially when Donald Trump may have actually won the union vote in key states, like Ohio?

Rosenblum would presumably argue that this is further proof of labor’s failure, since (he believes) voters do not have “any countervailing working class ideology that put[s] people’s needs before profits, that preach[es] class solidarity and mutual aid.”

If there is much to debate about Rosenblum’s solutions, his analysis of the problems facing labor is insightful and sound. Two important forces for change are alluded to his subtitle: immigrants and religious leaders.

“Too often union organizing campaigns focus exclusively on the economic and political dimensions of the fight,” Rosenblum writes, thus muting the “moral voice” of faith activists. Which brings us to an even thornier aspect of Rosenblum’s argument: immigration.

In the wake of President Trump’s executive orders on immigration, marches and rallies gave many angry people a forum to vent. But when Cardinal Joseph Tobin, archbishop of Newark, cited Exodus (“You shall not oppress an alien; you well know how it feels to be an alien, since you were once aliens yourselves.”) it lent moral clarity to an opposition sometimes blurred by rage.

Again, however, there is this inconvenient fact: According to exit polls, Donald Trump did very well among Catholics and even Evangelical Christians. It seems there are many folks out there who want to keep Christ in Christmas, but not necessarily in Christianity.

To his credit, Rosenblum is not naive.

Rosenblum reports on an inspiring moment from 2011, when Muslim shuttle drivers at a Seattle-area Hertz—who were members of the Teamsters’ union—were told they would have to clock out when taking a break for daily prayers.

“It would have been understandable if union leaders took a pass on the fight...cognizant that the vast majority of their union members...were likely to be quite unsympathetic,” writes Rosenblum.

But the union did fight—and won.

Still, it is not mere timidity to question whether victories can be replicated, given the hostility immigration generates, at least in some quarters.

The author scolds Barack Obama for being “more invested in bailing out the financial sector than in expending political capital for workers’ rights.”

Perhaps Rosenblum’s argument could have been bolstered by some historical context. The labor movement in America has absorbed various waves of immigrants with different religious and cultural backgrounds. Are there lessons there to be learned today? And in a book about the nexus of faith and labor, a consideration of, say, Leo XIII’s 1891 papal encyclical on labor and capital, “Rerum Novarum,” and how it was received in the United States, might also have provided some valuable insight.

As for the 21st century, Rosenblum ultimately believes progressives have been overly cautious, citing political realities. He scolds Barack Obama for being “more invested in bailing out the financial sector than in expending political capital for workers’ rights.”

Should Obama have taken a more labor-friendly approach? This is, after all, the same president Republicans quite effectively—with a significant portion of the electorate, anyway—depicted as a “socialist.”

In the end, there is no question that progressive thinkers and activists would be wise to build coalitions with religious leaders, even those with whom they disagree on hot-button issues like abortion.

Whether the key figure of the election of 2016 was not hyper-capitalist Donald Trump, but instead the socialist Bernie Sanders, still remains to be seen.

This article also appeared in print, under the headline “A new path for unions,” in the May 15, 2017, issue.

Tom Deignan (tdeignan.blogspot.com), a regular contributor to America, is a columnist for the Irish Voice newspaper, and has written about books for The New York Times, Washington Post and Newark Star-Ledger.