What does it mean to be a Christian rapper? A conversation with Sho Baraka 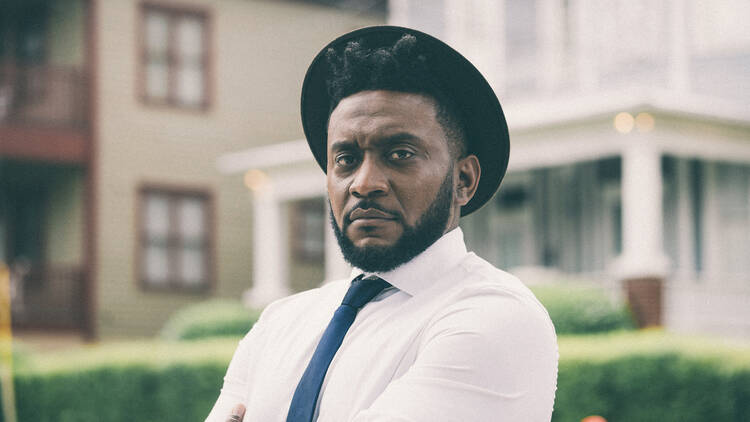 Amisho Baraka Lewis, better known by his stage name Sho Baraka, is sitting in the Sunday school room of the Park Slope Christian Tabernacle. “I almost didn’t come here; y’all New Yorkers scare me,” he jokes at a meet-and-greet before the concert. He is in Brooklyn, N.Y., for “A Night with Sho,” the tour for his latest album. If you didn’t know him, however, you would think he was just another city dweller, casual in white sneakers, light jeans and a white tee.

Baraka sits with a small, intimate group of V.I.P. ticket holders before his 8 p.m. show. In this setting, he comes off less like a rapper and more like a pastor, switching between scripture and jokes as he thoughtfully answers questions on “Damn,” Kendrick Lamar’s latest album, and the writing process for his own album, “The Narrative.” As he speaks, Baraka effortlessly intertwines his faith and understanding of hip-hop in a way that makes it very clear why he is so appealing to both Christian and secular listeners—his Christianity is a part of his art, but he doesn’t proselytize. For the rapper, faith isn’t about preaching but meeting people where they are, understanding their experiences and being genuine. “Authenticity is the best form of evangelization,” Baraka says.

When Baraka was in high school, his father and brother discovered Christianity and would talk to him about the faith. But it was later, in college, Baraka tells me after the show, that he really began to see people “loving and trusting in Jesus.” He describes hearing a preacher in college: “It really made Jesus more than this historical figure. It really made religion more than just something I intellectually believed in.”

Christianity is a part of his art, but he doesn’t proselytize.

Raised in Southern California, in the age of gangsta rap, the artist formed a rap group with friends. As he grew closer to God, however, he began to distance himself from hip-hop, believing the genre to be at odds with Christianity. Many find it difficult to balance an affinity for rap, with its provocative themes and often profane language, and a life of faith. Baraka says, “I became so religious, I even stopped listening to secular music.”

"As artists, it is our job to speak critically about culture, to castigate culture."

The latest, which took two years to create, was at the center of a controversy last year. LifeWay Christian Stores, a Southern Baptist retailer, pulled Baraka’s music from its shelves, citing complaints from customers about the profanity of the rapper’s lyrics, particularly “Piano Break, 33 A.D.”: “I was an insecure boy who just thought he was a genius/ But always pissed off, that’s because I thought with my penis.” In an interview with The Washington Post, Baraka said that the song is “about his past failures to live his life monogamously,” adding that it shows the ways “God has been good in my life.” I ask Baraka about the role of artists in situations where they might face criticism or censorship. “As artists, it is our job to speak critically about culture, to castigate culture,” he says, adding that this means you will not always get a positive reaction from your audiences.

His break with LifeWay raises another question: Is religion, specifically Christianity, in hip-hop a new phenomenon? The genre has always been religious, Baraka believes. “Hip-hop, especially from dudes like Rakim and Poor Righteous Teachers, from the Wu-Tangs to the Erykah Badus, these are people who communicate a religious belief system.” He says that the reason religious rap seems new is because Christianity in America is often “deemed to be the white man’s religion” and is, more often than not, viewed through a white lens. He adds that artists like Lamar and Chance the Rapper not only refute this notion by presenting Christianity through a black lens, but they are both much more explicitly Christian than the genre has ever been before.

J. Cole and the search for holiness in hip-hop
Nick Genovese

When I tell Baraka that when it comes to Christian rappers, along with Lecrae Moore, his name is one of the most recognizable, he demurs.“I don’t really desire for people to put me in this Christian label, only because there are presuppositions that come along with it,” he says. “I am going to talk about my experiences from the belief systems and the worldviews which I have, just like any artist.”

When Baraka takes the stage, however, it is difficult to separate the theology from the man. The crowd, a mix of agnostic, secular and faithful alike, is exuberant. It is Holy Saturday, the day before Resurrection Sunday—a term I hear several concertgoers use. “This tour has been a blessing to do, and it’s been empowering for me, for fans,” Baraka says. In the first five minutes of his set, he belts out a rendition of “This Little Light of Mine,” pausing in between the words to ask the crowd to celebrate Jesus. As I hear him, I am moved out of my seat, clapping along with my fellow concertgoers, as someone next to me proclaims, “What better way to welcome our Lord and Savior?”