J. Cole and the search for holiness in hip-hop 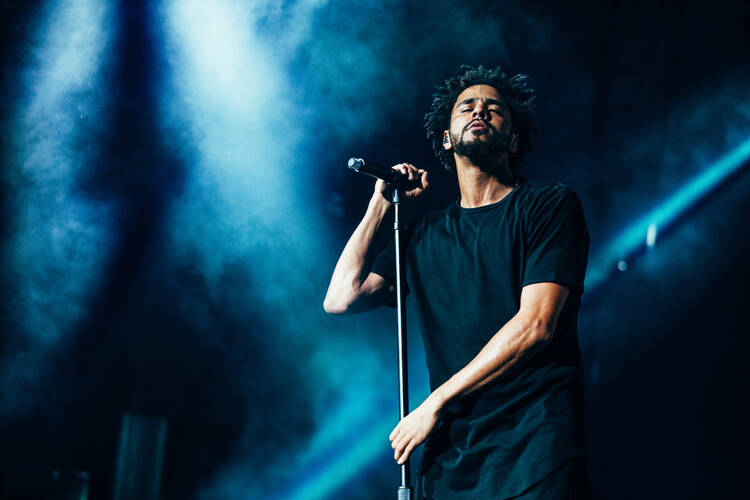 During a steamy and rain-soaked evening in the outdoor amphitheater of Jones Beach Theater, I remain standing to hear my favorite hip-hop artist’s last words before he disappears backstage.

“Until next time, ladies and gentlemen. Peace and love!”

J. Cole is a modern-day St. Augustine. Like the Christian theologian and bishop, J. Cole is a seeker of truth, someone trying to be holy. Both men speak to the heart of the Christian message of grace—that everything we have is a gift from God that in turn gives us true joy and lasting satisfaction.

But I don’t look up to St. Augustine as much as I look up to J. Cole.

Yes, I prefer the guy who sports Air Jordans and dreadlocks. The dude who wears baseball jerseys, sweatshirts and baggy shorts. The man who raps about his deepest thoughts with soulful emotion and bursting energy. The artist who always enthralls me through his hip-hop music and life stories. And trust me, no one has watched more J. Cole interviews than I have.

“2014 Forest Hills Drive” weaves intimate personal stories with deep spiritual truths. The album name refers to J. Cole’s childhood home in North Carolina that he repurchased in 2014. Cole plays the prodigal son who returns home as he finds his way back to what is most important to him.

He begins the album with a melodic and inquisitive song about happiness and freedom, and like most of the other songs, J. Cole not only speaks to his listeners but also to himself. He showcases his exceptional storytelling abilities in songs such as “0’3 Adolescence,” in which he narrates his teenage struggle with low self-esteem. He finishes the album with “Love Yourz,” in which he ties together his spiritual journey to conversion with the hook, “there’s no such thing as a life that’s better than yours.” That’s not far off what Augustine has in mind when he says, “Our hearts are restless until they rest in you.”

And like Augustine, J. Cole chased fiercely after worldly pursuits, ventured far and wide to follow his dream, and delved inward to seek answers to life’s essential and enduring questions.

J.Cole reflects throughout the album about his burning desire to become an accomplished rap artist. After chasing money and fame in his early twenties, he realizes that he overlooked the people that mattered most to him. In “Apparently,” Cole sheepishly regrets how he neglected his mother during his college years while chasing women and partying. He raps, “Had no clue what you was goin’ through/ how could you be so strong? And how could I be so selfish/ I know I can be so selfish.” Again, like Augustine, his selfishness had blinded him to the person he cared about most, his mother.

J. Cole’s conversion occurs gradually. In interviews and live performances, he says that the world of Hollywood and the pursuit of material possessions and worldly successions made him uncomfortable. He explains this in “Love Yourz,” where he sings, “always gon’ be a whip that’s better than the one you got/ always gon’ be some clothes that’s fresher than the ones you rock/ always gon’ be a girl that’s badder out there on the tours/ but you ain’t never gon’ be happy till you love yours.” Here he expresses his deepest discovery—that only love and gratitude, not money, fame, or other worldly success, can bring enduring happiness.

As Christians, we sometimes limit our idea of holiness to those who explicitly serve the church in an easily identifiable way. But this approach often excludes those that offer the Christian message in their own unique manner. After all, saints are not those who are perfect, but to paraphrase St. Francis de Sales, those who are themselves perfectly well.

J. Cole is cultural icon, not a religious one. Even though he refers to “God” and “Jesus” in his music, he is regarded as a hip-hop artist, not a Christian one. Even as he questions the pursuit of riches, he frequently boasts about his wealth, swears liberally and lives a lavish celebrity lifestyle.

But more people today listen to hip-hop music than read theology. More people can recognize a radio hit than recall an ancient text. As people in the world today turn to music and other forms of pop culture for inspiration, we must look for diverse models of faith—not only those recognized by the church, but also those who promote the Christian message and model it in their lives and art.

St. Augustine’s last words before death were, “Your will be done. Come, Lord Jesus!”

That sounds a lot like, “Peace and love!” to me.

Nick Genovese, a recent graduate of Boston College, is an O'Hare Fellow at America.

Nick Genovese
Show Comments (
3
)
Comments are automatically closed two weeks after an article's initial publication. See our comments policy for more.
William Rydberg
5 years 8 months ago
Brings to mind Rudy Vallee, Edward-Prince of Wales, Lily Pons, and the "It Girl-Clara Bow"....I believe that he (Rudy V.) is buried in St Hyacinth's Cemetery in Westbrook, Maine. As for St Augustine, don't know where he's buried? In Catholicism, the emphasis is on what the Spirit wants. This is usually manifested in the currency of the subject Disciple of Jesus-God come in the flesh, about 500 years on... Stay tuned...
Kevin Murphy
5 years 8 months ago
In other words, he's a hypocrite. You state that he's realized the falsity of material possessions and fame, and then say he boasts of wealth, swears and lives lavishly. Easy to talk the talk. I suggest you pay more attention to Augustine.
Nicholas Genovese
5 years 8 months ago

Material possessions and fame are things that J. Cole struggles with, just as Augustine had. For me, holiness isn't something to be perfectly attained, but rather something to always be striving towards. I think he models that pretty well!