Was Pontius Pilate an agent of Christian salvation? 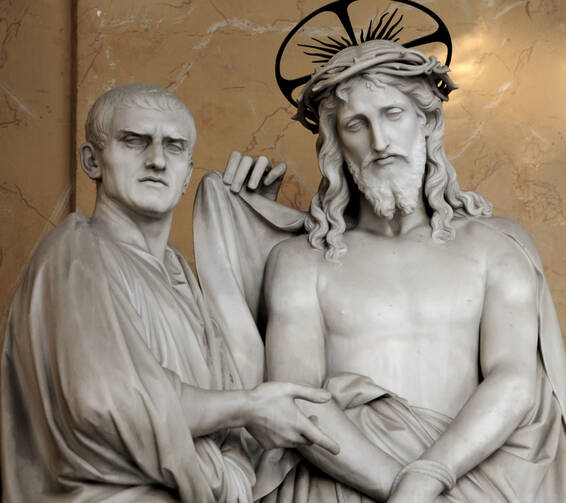 Aldo Schiavone is an Italian classical historian who has occasionally ventured into more popular works, like his recent study of Spartacus. Here he turns to Pontius Pilate, the Roman procurator of Judea who condemned Jesus to death. Other than the witness of the Gospels, relatively little is known about Pilate apart from brief mentions by Josephus, Philo, Tacitus and a recently discovered epigraph in Caesarea.

One of the contributions of this book is that it situates Pilate in the social political and cultural milieu of the Roman Empire in the Middle East, especially in the conflicted atmosphere of Judea and Jerusalem at the time of Christ. The reader comes close to developing a sympathy for Pilate in dealing with the Jewish population and its leaders, so at odds were the practices of Roman rule with the idiosyncratic religious and political convictions of the Jews. In clarifying this relationship, Schiavone is able to argue which aspects of the Gospel accounts relating to Pilate’s case are more or less credible. Among the less likely aspects are any abdication by Pilate of his authority and responsibility for the condemnation of Jesus to a Jewish crowd, which Schiavone argues simply was not present. This was a matter between Pilate and a small group of Jewish religious leaders, and so the crowds calling for Barabbas or saying “His blood be upon us!” simply did not happen.

It is Schiavone’s conviction that Pilate was always in control that leads him to the most interesting argument in the book, which he makes through a reconstruction of what he believes was the likely dialogue between Pilate and Jesus. While Pilate might not have believed in Jesus’ mission, he came to accept that he had one, which he understood could be accomplished only through Jesus’ sacrificial death. Pilate’s condemnation of Jesus, even though he did not think him guilty of any offense, represents, therefore, his acceptance of Jesus’ understanding of God’s will for him and makes Pilate a self-aware participant in the mystery of salvation.

This article also appeared in print, under the headline “Was Pontius Pilate an agent of Christian salvation?,” in the May 1, 2017, issue.