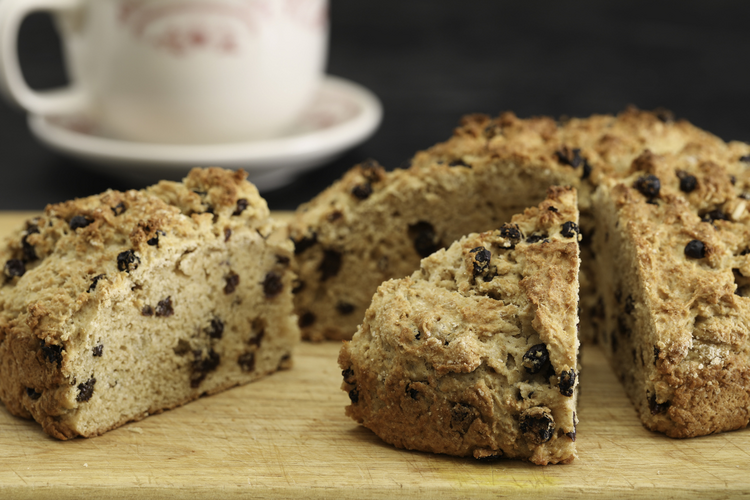 For as long as I can remember, my mother has made Irish soda bread every year in the days leading up to St. Patrick's Day. She stands in the kitchen, digging her hands into the dough, baking loaf upon loaf for friends and family and, of course, she keeps a few at home. But no matter how many loaves she bakes, she always takes time to follow precisely the recipe she received from my great-aunt, Helen: Once she wrestles the sticky dough into a pan, my mother uses a knife to cut a cross into the top and then pauses, as my Aunt Helen did before her, to say a short prayer, blessing the bread, those who eat it, and for special intentions that day.

While the ingredient of prayer is my aunt's special touch, cutting a cross into the top of a loaf of Irish soda bread before placing it in the oven isn't unique to our family. The tradition actually serves a two-fold purpose, according to an interview with Rory O'Connell, an Irish chef and expert on Irish cuisine and food history, on the Today Show website:

Epicurious: What is the purpose of cutting the shape of a cross on top of the bread?

Rory O'Connell: It's scientific, primarily, because it allows the heat to penetrate into the thickest part of the bread, so it assists cooking. And obviously the cross is a cruciform shape, so in a Catholic country that had a resonance — it had the symbolic note of crossing the breads and giving thanks. There was also the expression "to let the devil out of the bread," so it was slightly superstitious. And if you make that cruciform shape on the bread, when it comes out of the oven it breaks beautifully. So you've got the blessing of the bread by putting the cross on it and then you've got the symbolic breaking of the bread.

O'Connell also points out that the raisin-laden version of Irish soda bread most Irish-Americans are used to is unfamiliar to most Irish. But that doesn't mean it isn't delicious. In my (completely unbiased) opinion, Aunt Helen's Irish soda bread is the best I've ever tasted. My family enjoys it toasted and topped with butter, but it's just as good plain. For those who might want to try their hand at it, I include the recipe below:

Directions
Mix flour, sugar, baking powder, baking soda, and salt together. Mix in melted butter by hand. Add raisins and mix again, by hand. Add beaten egg and sour cream. Mix thoroughly by hand. Put in greased and floured 9” round layer-cake pan. Cut a cross in it. Say a prayer. Bake for 55 minutes at 375 degrees. Insert a knife into the center of the bread to test if it is done. If it is cooked all the way through, the knife should come out clean. Remove loaf from pan. Cool and enjoy.

Show Comments (
2
)
Comments are automatically closed two weeks after an article's initial publication. See our comments policy for more.
David Nickol
10 years 8 months ago
MMMMMM! The cafeteria in the building where I work gave a demo on making Irish Soda Bread the other day and handed out a recipe. Theirs has less sugar, more butter, but buttermilk instead of sour cream. It was quite good, but it sounds to me like Aunt Helen's recipe would be better. I think I'll give it a try.

This is the first recipe I've found here. Thanks!
Margaret Riordan
10 years 8 months ago
Hi Kerry,
I love the look of your recipe as well, but am not sure about the 'sour cream'. What we are sold as 'sour cream' here in New Zealand is a fairly solid sort of beast, the kind of thing you might melt over jacket potatoes. Is your 'sour cream' more liquid than that?
Margaret
More: Ireland / Spirituality