Shakespeare gets a sitcom in ‘Upstart Crow’ 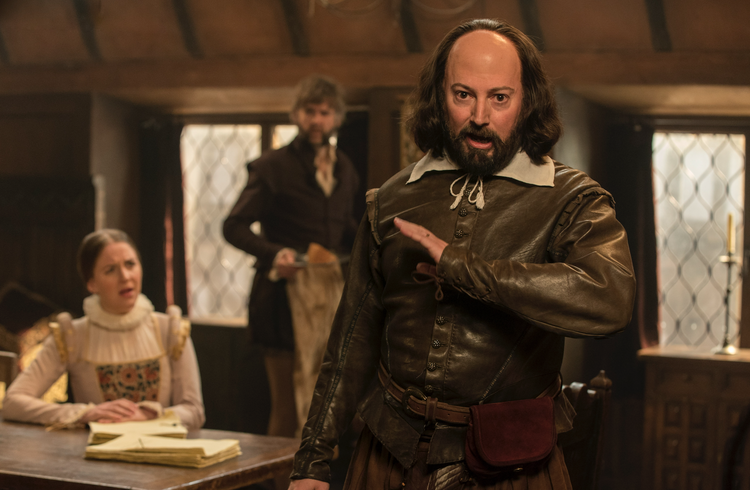 The popular film “Shakespeare in Love” seemed to unleash a wave of fictional imaginings of the English writer: the plays “Equivocation” and “The Beard of Avon,” the films “Anonymous” and “All Is True,” the short-lived TV series “Will.” But 1999’s frothy Best Picture winner was hardly the first rendering of Shakespeare as a fictional character.

The Bard of Avon made periodic appearances in novels throughout the 19th and 20th centuries, from a trilogy by Robert Folkestone Williams in the 1840s to Anthony Burgess’s 1964 book Nothing Like the Sun. And his first recorded stage appearance as a character is from 1679, some 60 years after the playwright’s death, when “the Ghost of Shakespeare” emerged to give a prologue to Thomas Dryden’s version of “Troilus and Cressida.”

This Will Shakespeare is an insecure if well-intentioned striver.

There is nothing ghostly about the Shakespeare we meet in “Upstart Crow,” a delightfully cheeky BBC sitcom comprising three short seasons, available in the United States through the on-demand service Britbox as well as via Amazon. As played by the acerbic David Mitchell, one half of the comedy duo Mitchell and Webb, this Will Shakespeare is a mildly schlubby and insecure if well-intentioned striver, dividing his time between a bustling family hearth in Stratford and a rooming house in London from which he is building his playwriting career. The show’s title comes from an epithet hurled at Shakespeare in 1592 by a jealous poet, Robert Greene, in a pamphlet.

A fictional Greene is on hand as the show’s mustache-twirling villain to pound home the familiar theme of Shakespeare’s low birth and insufficiently fancy education. In a typical pithy putdown, he dismisses Shakespeare as “a country bum-snot, an oik of Avon, a town-school spotty-grotty.” The show’s Greene also functions as a literal nemesis, positioned (ahistorically) as the Master of the Revels, the impresario and censor through whom all staged entertainment must pass muster.

“Upstart Crow” makes merry with this rivalry, spinning storylines out of the class conflicts among Shakespeare, his social betters and relative inferiors that often mimic the contours of his own famous plots. In one episode, a trio of witches foretells Shakespeare’s good fortune in Stratford real estate, which tempts him to murder a local landlord—a Scotsman named Duncan MacBuff, wouldn’t you know—whose estate Shakespeare and his wife both covet. In another, Shakespeare happily receives an invitation to “saucy prancings at Lord Southampton’s,” only to have Greene, preying on his social anxiety, trick him into wearing ridiculous yellow stockings and cross garters to the event.

If those references to some of the Bard’s greatest hits (“Macbeth” and “Twelfth Night,” respectively) click with you, “Upstart Crow” is bound to appeal. But even if you miss some of its intertextual call-outs, two other strengths recommend the show: sheer linguistic playfulness and artful anachronism. On the first point, the writer Ben Elton has conjured a consistently funny faux-Elizabethan argot, freely mixing contemporary idioms and archaic ornamentations (“He doth hate my gutlings,” “I think I dodged a musket ball”). The dialogue throughout swings effortlessly from “wow” to “thou,” from “Ain’t no thing” to “Be this true?”

The dialogue throughout swings effortlessly from “wow” to “thou,” from “Ain’t no thing” to “Be this true?”

Likewise, the show’s contemporary callouts range from obvious to inspired. The most recent season references Brexit and #MeToo, and a recurring joke upon Shakespeare’s arrival in Stratford is a long rant about the indignities of coach travel, a clear stand-in for present-day complaints about rail strikes and airline baggage fees. A particularly rich episode about the sonnets—in which the ostensible “twin muses” that inspired them, the Fair Youth and the Dark Lady, are both confused and insulted by the poems’ ambivalent ironies—Shakespeare has this exchange with his landlady’s daughter, Kate:

Shakespeare: A play is but a puff of air. But a published poem lives forever. Particularly now that these short, easily digestible sonnets have made the epic verse cycle look so last century.

Kate: Young people have such short attention spans these days.

Shakespeare: And with publishing, kids have instant entertainment in the pockets of their puffling pants. You see them hanging around together, hunched over a book of 14-line iambic pentameter, thumbing away, transfixed like zombies, not talking to each other, not interacting socially, lost to the world. “Get off your book of sonnets!” cry parents up and down the land.

There is much more where that came from, along with many knowing japes about how the Bard’s work will be interpreted, revered and misunderstood in the future. But “Upstart Crow” doesn’t just traffic in pop-culture riffs. It also plays, loosely but smartly, with the history and politics of the time.

The first season has a running theme of Catholic/Protestant conflict, with Christopher Marlowe hunting down “papist assassins” for the queen.

The first season has a running theme of Catholic/Protestant conflict, with Shakespeare’s friend, Christopher Marlowe, unquestioningly hunting down “papist assassins” for the queen, while Shakespeare tries to keep his mother’s Catholic faith under wraps. (When she calls it the “one true religion,” her son retorts tartly that that was “under the last queen. Under the current crazed harridan, it’s satanic heresy. Do try and keep up.”)

Some gags walk a line between sending up the prejudices of the time and leaning on them a bit hard for laughs. The casual disparagement of Jews, though hardly unchallenged (“I’m being ironic and post-Renaissance,” Shakespeare says in defense of “The Jew of Malta,” a play he ends up giving to Marlowe), may sit uncomfortably with some viewers. And the treatment of sexism can be a bit relentless. How many times must we be reminded that Kate, Shakespeare’s over-educated helpmate (expertly played by Gemma Whelan), aspires to be an actress in an age when, as Shakespeare puts it, “It is illegal for girls to do anything interesting”?

These are but trifling quibbles for the embarrassment of riches that is “Upstart Crow.” With its density and irreverence, its gleeful mix of below-the-belt crudity and snob appeal, its clearest antecedent is the anarchic meta-history series “Blackadder,” which Elton co-created. But where that show was witheringly unsentimental about the secrets and lies of English history, “Upstart Crow” has a warm streak that is hardly amiss for the writer of great romances as well as frothsome comedies and bloody tragedies.

Each episode ends with Shakespeare and his wife, Anne, smoking pipes contentedly by the fire in Stratford-upon-Avon, as she offhandedly suggests story ideas we know he will take. If such winks and giggles are your cup of English tea, hie thee to “Upstart Crow.”

i loved 'Upstart Crow'--- which i watched on PBS. i absolutely loved it........and then: it disappeared. so sad. PBS is now as boring and repetitive as the regular channels. ......

PBS pitches too much to the well-off elderly with its smug guru shows and Brain health shows followed by such a pious (without God) audience. But PBS's demographic analysis probably shows that most of its contributions (aside from Koch) come from the well off elderly who pride themselves on not watching Fox News.