‘Will’ explores the genesis of genius, and Shakespeare’s Catholic roots 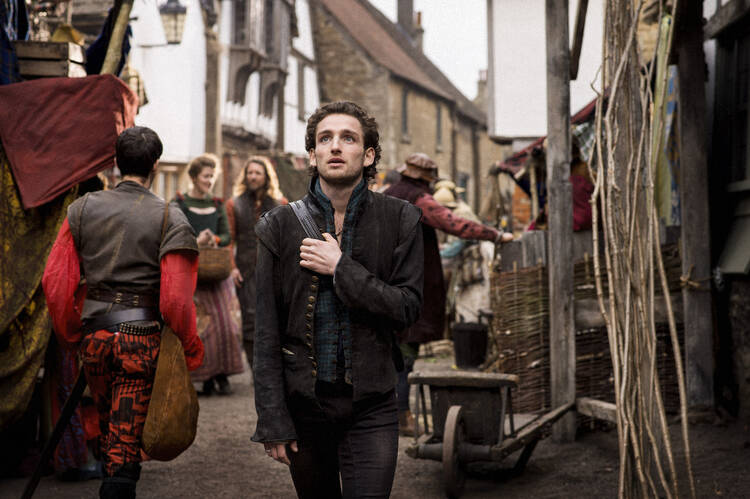 Laurie Davidson as William Shakespeare in "Will" (photo: TNT)

“Shakespeare” by any other name—the Earl of Oxford, Francis Bacon, Christopher Marlowe—would still be the reigning genius of the English theater. The play really is the thing: Does it matter who wrote “Hamlet” or “Macbeth” or “Romeo and Juliet”? What his shoe size was? What he had for lunch on July 19, 1589? Our fascination with the artist often serves to obscure the art.

And yet, the story of Shakespeare himself is eternally appealing, because we want to know what confluence of circumstances, or chance, or divine blessing, could produce such a towering figure. Also, we love a mystery.

The story of Shakespeare is eternally appealing, because we want to know what confluence of circumstances, or divine blessing, could produce such a towering figure.

Shakespeare is certainly that. We know he was a husband, a father, a businessman, an actor, certainly a politician: his take on history was often tailored to appease the Tudors. But during the years leading up to his first appearance in the records of the London stage (1592) we don’t know much else. It is into this befogged period of Shakespeare’s life that “Will” presumes to fill in the historical blanks. The TNT series, which debuts Monday at 9 p.m., portrays the young playwright as, among other things, an adulterer, an opium smoker, an acquaintance of Bacon and Sir Walter Raleigh, and an ambitious climber with literary immortality in his crosshairs.

He is also a Catholic. Like any historical fiction worth digesting, “Will” is grounded in actual facts, and one of the accepted facts about Shakespeare’s life is that he came from Catholic people. He may even have had a Catholic marriage. But he was also a member of the Anglican Church, and despite what are viewed by scholars as clues to his beliefs within his plays, he kept his religious cards close to his vest. Did we mention he was a politician? Maybe he was just a survivor: Being a Catholic under Elizabeth I could get one hanged, or drawn and quartered. Among the victims of Elizabeth’s Protestant zeal are the Forty Martyrs of England and Wales, canonized by Paul VI in 1970. One of these, Robert Southwell, is a major player in “Will.”

Robert Southwell, the Jesuit, poet, clandestine missionary and saint, is a major player in "Will."

Southwell, the Jesuit, poet, clandestine missionary and saint, was, it seems, distantly related to William Shakespeare, though in “Will” the relationship is immediate and familiar. Southwell (Max Bennett) regularly dragoons Will (newcomer Laurie Davidson) into the resistance. The quite justified paranoia of the Catholic faithful who surround the charismatic Southwell means Will is regularly roughed up and interrogated by fuming “Popists,” who suspect he may be a spy. That any of this might have actually happened seems the furthest of possibilities, but the violence here is realistic. Perhaps too realistic: The torturing of Catholics, notably by the sadistic Richard Topcliffe (a mustache-twirling Ewen Bremner), seems gratuitously gory, especially the public disemboweling of Southwell’s father, who will come back to haunt Will like, yes, Hamlet’s ghost.

The, shall we say, “variations” on history committed by “Will”—including a soundtrack that includes The Clash and David Bowie , and a cast tattooed with enough ink to run a newspaper—do make for colorful, captivating drama and provide an undertow of tension on which the rest of the plotlines nimbly navigate.

Was Shakespeare Catholic, Protestant or an atheist?
Kathleen Doherty Fenty

Said devices include Will’s introduction to the Globe Theatre and its habitués, who include Richard Burbage (Mattias Inwood), based on the real-life actor with whom Shakespeare would enjoy a successful and profitable partnership; his sister, Alice (Olivia DeJonge), with whom Will enjoys a different kind of partnership; and his father, James (Colm Meaney), the builder of the Globe and a fulminating critic of all things Shakespeare. He will learn.

One of the intriguing things within the scripts for the 10-episode series (it will no doubt be renewed) are the Shakespearean allusions; Episode 1 is called “Cowards Die Many Times,” which is not quite the line from “Julius Caesar.” Neither is the observation by the foppish Christopher Marlowe (Jamie Campbell Bower) that “the fault lies in my astrology,” to which Will replies, “Perhaps the fault lies not in your stars but in yourself.” One can see the budding playwright absorbing, digesting and reworking what he hears, and what we hear is the verbiage of 1589 London becoming noble. We can only assume, as the chapters roll out, that the same thing will happen to the unformed subject of “Will.”