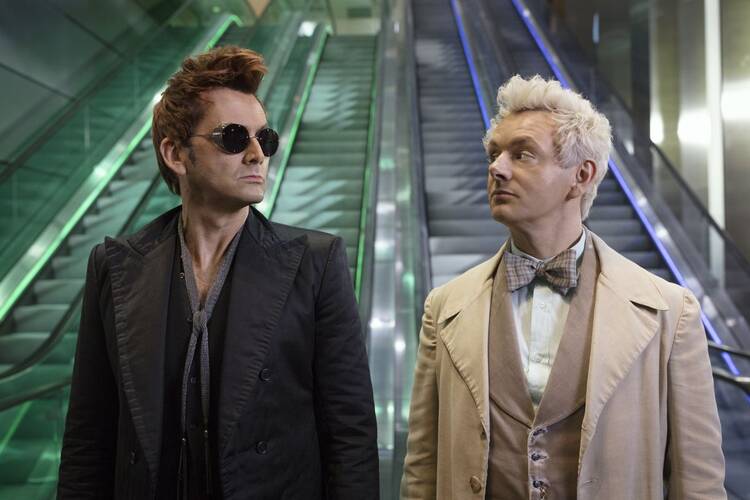 Near the middle of Amazon’s new TV series “Good Omens,” based on the much-beloved fantasy novel by Neil Gaiman and Terry Pratchett about an angel and a demon trying to stop the apocalypse, the series veers away from its witty, winding plot to walk us through the 6,000-year history of its main characters’ friendship. So in ancient Mesopotamia the two stand in a crowd marveling at Noah’s ark. Hearing what God has planned, the demon Crowley reacts with horror: “That’s more the kind of thing you’d expect my lot to do.”

Three thousand years later, as the two watch Jesus being crucified, Crowley wonders what he had said that got him into so much trouble. “Be kind to each other,” his compadre Aziraphale explains. “Ah. That’ll do it,” Crowley deadpans.

The Amazon series is based on the much-beloved fantasy novel by Neil Gaiman and Terry Pratchett.

On and on they wander through the ages, forced by their superiors to get involved in various causes for good or ill but mostly just happy to be together amid the general madness of it all.

Part Monty Python, part fairy tale, “Good Omens” presents itself as theodicy. In its own wonderfully whimsical way, it wonders about evil, suffering and God’s ineffable plans by way of the divine middle management who have watched it all happen. The plot involves an 11-year-old boy worried about the state of the world—who unbeknownst to himself is actually the Antichrist—his best friends and pet dog (a hound sent from hell to protect him), a witch, witchfinders, a fake psychic, a real psychic, the four horsemen of the apocalypse (two of whom are women), Jon Hamm as a condescending Angel Gabriel, and a bunch of quite hostile demons.

Crowley and Aziraphale wander amid the action like the Rosencrantz and Guildenstern of salvation history, silly bit players with no real understanding of the big picture. But their ignorance makes them wise. While their superiors, both demonic and angelic, push for the apocalypse so that they can defeat one another once and for all, Crowley and Aziraphale cannot take their eyes off humanity. They see our flaws and our absurdity, yet they look upon us with the gentle delight of a pair of loving uncles.

Yet far more meaningful than the series’s theological ruminations is its exploration of friendship. It is not often today that you come across a series or a story where two people are just really good friends. Everything eventually seems to get turned into a “will they?/won’t they?” situation.

And to be clear: As portrayed by the brilliant actors David Tennant and Michael Sheen, the demon Crowley and angel Aziraphale certainly do have sparks. But the depth of their relationship does not come from sex, fantasy or longing; it is not about chasing anything for oneself, but doing something nice for another.

The depth of their relationship does not come from fantasy or longing but time spent together and basic generosity.

You can understand why movies and TV shows rarely want to stop the relationship story there. Friendship generally isn’t flashy; it is not about save-your-life kinds of deeds but about little gestures, like an unexpected chat or buying someone a book they had been talking about. Really, it’s something that first happens to you, the unexpected discovery that someone else knows you and thinks about you even when you don’t ask for it.

We see the true power of that realization play out on Aziraphale’s face when he discovers Crowley has saved some of his books from destruction. After 6,000 years on the planet, this angel suddenly realizes that all this time he, too, has been seen and cared about. Not only is he not alone; he is important in someone else’s life.

‘Catastrophe’ looks at humanity in all its messiness
Jim McDermott

The final challenge of ‘Game of Thrones’: ‘We need to find a better way’
Jim McDermott

“Good Omens” is a story about heaven, hell, the potential end of everything and where to get a really fine crepe. Revelations, in other words. But amid it all, the friendship between Aziraphale and Crowley is like the tiny wildflowers that grow in the cracks of a sidewalk. It goes unseen a thousand times over. But once discovered, that relationship is a humbling, life-changing revelation of its own.

Quite good mini series. An adult look at good and evil.

I don't watch much TV but have read and loved the book. It sounds as if the TV series does it justice - I'll have to check it out.

Loved this series, especially the camaraderie between the main characters. I don’t know why it became so controversial.

Wonderfully witty adaptation! The two leads are so spot on and their friendship so captivating that everyone around them pales in comparison. It's not that the other actors are miscast or that they don't deliver; it's just that Sheen and Tennant are so compelling that time away is time wasted. Well done Mr. Gaiman and a fitting tribute to the late Mr. Pratchett.

A well done series and a fitting tribute to Sir Terry. I really miss his clever but kind sense of humor. Thanks for an excellent review. Only the caption in the photo is wrong: Aziraphale is played by Michael Sheen and Crowley by David Tennant.