Trump was never popular with young voters. So how did Marine Le Pen win over France’s youth? 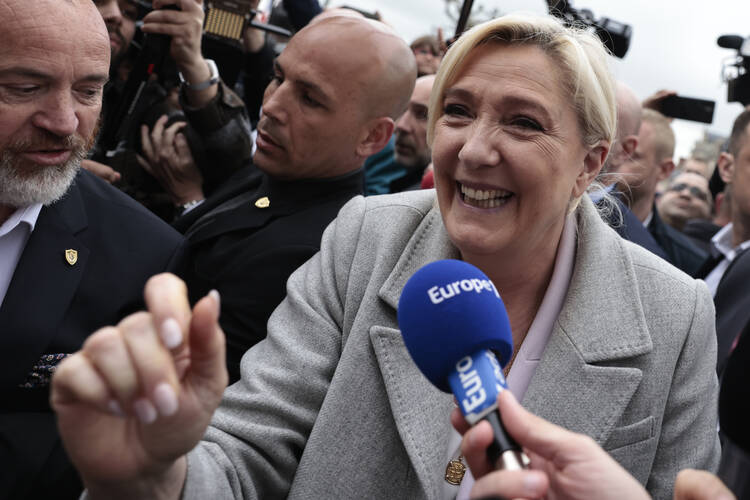 As the French presidential election heads to a final round on Sunday, April 24, the centrist Mr. Macron is presenting himself as a last defender against a team of authoritarians threatening Western democracies, including his far-right opponent, Marine Le Pen, and people she has claimed as allies, including Donald J. Trump, Vladimir Putin and Hungarian Prime Minister Viktor Orban. Ms. Le Pen has said she represents “the policies that are represented by Mr. Trump” and “Mr. Putin.”

For half a century, the Le Pen dynasty has been synonymous with far-right nationalism and the darker elements of European history. For Americans, the equivalent of this year’s election in France would be if a daughter of George Wallace were on the verge of winning election to the White House—but with a groundswell of young Americans whose parents and grandparents rejected Wallace when he ran for president on a racist platform in 1968.

For Americans, the equivalent of this year’s election in France would be if a daughter of George Wallace were on the verge of winning election to the White House.

In 2017, Ms. Le Pen lost to Mr. Macron, a 44-year-old former investment banker, by 32 percentage points. This time, polls a week before the election have her trailing by high single digits. Her victory, unlikely but not impossible, would hand control over a major nuclear power of 67 million people to a controversial nationalist at a time of spiraling inflation, war in Europe and threats to democracies around the world. The consequences would be damaging to civil rights in France but also to European unity and to the plight of immigrants and people of color throughout Europe.

To make sense of what has changed since 2017, it is important to understand how Europe’s understanding of its own history is changing, opening the door for somebody like Ms. Le Pen, and how young people’s views are different from those of older voters.

A post-election poll indicated that in the first round of the election on April 10, Ms. Le Pen, although she finished third with voters under age 24, led all 12 candidates among voters aged 25 to 34, while finishing far behind Mr. Macron among voters over 65. By contrast, in the United States, polls showed that younger voters were significantly less supportive of Mr. Trump than older generations were in both the 2016 and 2020 elections.

Ms. Le Pen, although she finished third with voters under age 24, led all 12 candidates among voters aged 25 to 34, while finishing far behind Mr. Macron among voters over 65.

When I was growing up in Brussels, the capital of the European Union, in the 1980s, the election of somebody like Ms. Le Pen in Western Europe was unthinkable. The pain of 20th-century European wars was still palpable. World War I veterans limped around our neighborhood, and Holocaust survivors made regular appearances in my public school. All European countries had some version of the cordon sanitaire, a tacit agreement among mainstream political parties that they would collude to keep far-right politicians out of power. You could be called nothing worse than extrème droite. And questioning the facts of the Holocaust was taboo. But now that understanding of history may be fading: A CNN poll in 2018 found that one out of five French adults under the age of 35 had never heard of the Holocaust.

Jean-Marie Le Pen, the father of Marine Le Pen, was one of the first prominent European politicians to raise doubts about humanity’s greatest crime, in which France’s collaborationist Vichy government had been complicit. (Mr. Le Pen first ran for president in 1974, and again in 1988, 1995, 2002 and 2007; in 2002, he finished second in the preliminary round with 17 percent but was crushed by Jacques Chirac in the run-off, 82 percent to 18 percent.) Denying the Holocaust is illegal in France, and frequently Mr. Le Pen was fined for saying some version of his 1987 declaration that “I’m not saying the gas chambers didn’t exist. I haven’t seen them myself…. But I believe it’s just a detail in the history of World War II.” This was classic Le Pen, trolling the establishment with a controversial statement planted with a seed of deniability. He wasn’t saying the Holocaust didn’t happen.

Marine Le Pen has worked similar statements into her political rhetoric. For example, in 2017 she downplayed the role of the French state in collaborating with Nazi Germany to round up and deport Jews, a fact former presidents Francois Hollande and Jacques Chirac had apologized for.

An understanding of history may be fading: A CNN poll in 2018 found that one out of five French adults under the age of 35 had never heard of the Holocaust.

But more recently the 53-year-old Ms. Le Pen has toned down her firebrand image. She publicly broke with her father over his Holocaust remarks and has focused this recent campaign on the economy, while playing up her love of cats. That formula steered her to an unexpectedly strong second-place finish in the April 10 primary, when she notched 23 percent to Mr. Macron’s 28 percent.

As in the United States, politics in France has been shaped by the failure of Western democracies to adjust to the decline of their manufacturing and industrial sectors. France also has a big Rust Belt, inhabited by a frustrated blue-collar workforce that has lost millions of jobs in the last 40 years. The downward spiral of rural and industrial France, a country whose sophistication and fine wines overshadow its blighted mining towns and crumbling housing projects, has deepened economic inequality, fueled fears of immigration and fostered anger and stress in politics. The menace of Islamic terrorism also pours fuel on the fears of the bogeyman Ms. Le Pen calls the “Great Replacement,” the demographic ascendance of Muslim immigrants and their families.

But unlike in the United States, there is no fight here about the role of government in the economy. Since the rebuilding of Europe after World War II, there has been no question that workers deserve fair pay, low-cost health care, pensions and representation in trade unions. Even if Ms. Le Pen wins, France is not about to stop being a European social democracy.

Instead, the economic solutions that candidates propose tend to be small adjustments to the social contract, not major reforms. Ms. Le Pen, for example, has promised to cut taxes on gas and other consumer essentials. Mr. Macron, in contrast, has taken the politically riskier step of proposing to raise the retirement age from 62 and 65 in order to increase the tax base and raise national economic output.

With the essential social contract settled, French political candidates are prone to offer big remedies that are cultural or philosophical.

For young people, finding a solution to the economic misery that their society appears to be offering them may outweigh their parents’ fears about the far right. It may be why they are willing to overlook Ms. Le Pen talking about limiting France’s participation in the North Atlantic Treaty Organization, or reinforcing the ban on Muslim headscarves and rewriting the constitution to diminish the presence of immigrants in French society.

Young voters know those probably aren’t the answers, but “choosing your enemies” may not be as easy as it used to be.

[Also by John W. Miller: “Is inflation just telling us that our way of life is too expensive?” and “It’s time to bust up the Major League Baseball monopoly”]