Is inflation just telling us that our way of life is too expensive? 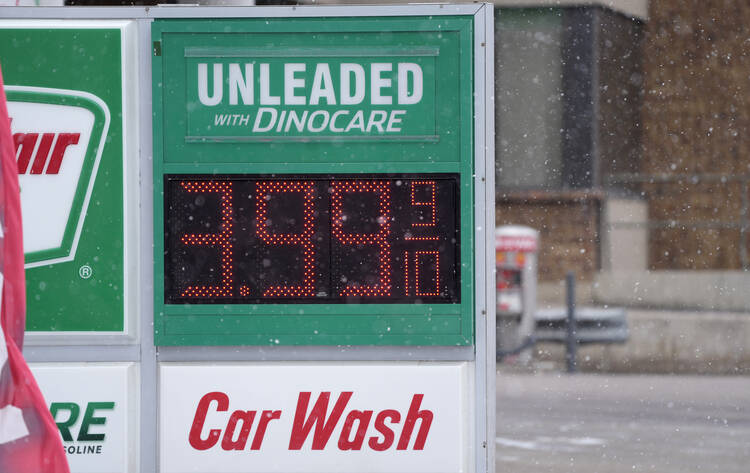 The price for a gallon of regular-grade gasoline is shown at a service station in Denver on March 9, 2022. (AP Photo/David Zalubowski)

The inflation rate, the highest in 40 years, is being linked in the short term to the war in Ukraine, but in the long term it may also raise structural questions.

Inflation, as it is usually defined, reflects the cumulative price increase of an official list of goods we need to live every day, from the gas we put in our car to the cereal we eat for breakfast. When inflation outpaces wage increases, a nagging trend that has suddenly become far worse, we need to make do with less.

That immediate pressure is heaviest on those with low and moderate incomes. As an economist with the Federal Reserve Bank’s Minnesota branch declared in a paper published in February:

Households with more money have more options to preserve that money’s value in the face of inflation. “They have access to financial markets,” said Minneapolis Fed Senior Research Economist Juan Pablo Nicolini. “They can have assets that pay interest. At the bottom of the income distribution, some people don’t even have bank accounts—they work on cash. These are the people who are hit the most.”

The pain doled out by inflation, which some economists call a regressive tax, demands solidarity from government agencies, charities and churches. As Pope Francis wrote in his 2020 encyclical “Fratelli Tutti”: “We need to develop the awareness that nowadays we are either all saved together or no one is saved. Poverty, decadence and suffering in one part of the earth are a silent breeding ground for problems that will end up affecting the entire planet” (No. 137).

“We want people in poor countries to have the same quality of life as we do in the West. On the other hand, the high growth model of rich economies might need to be questioned.”

But a persistently high inflation rate also calls us to consider the teaching of a different encyclical, and maybe even a different way of life. In “Laudato Si’,” Pope Francis challenges our embrace of “infinite or unlimited growth, which proves so attractive to economists, financiers and experts in technology.” That idea is based, he wrote, “on the lie that there is an infinite supply of the earth’s goods, and this leads to the planet being squeezed dry beyond every limit. It is the false notion that ‘an infinite quantity of energy and resources are available, that it is possible to renew them quickly, and that the negative effects of the exploitation of the natural order can be easily absorbed.’”

That is a challenge to the way most of us live now. In 1992, at the Earth Summit in Rio de Janeiro, George H.W. Bush famously declared that the “American way of life is not negotiable.” What he meant was that Americans were not going to give up their happy car- and carbon-dependent ways.

[Related: Down with credit cards. Up the minimum wage.]

But what if the American way of life is simply becoming too expensive even as it is also the way of life that so many of the world’s roughly eight billion people aspire to? What if this is what the current inflation spike is really trying to tell us?

The suburban way of life—people living far from their jobs, in houses with more bathrooms and bedrooms than they need—might be in jeopardy.

Remember that the period economists call the Great Inflation, between 1965 and 1982, was driven in large part by the oil shocks of the 1970s. In a similar way, Russia’s invasion of Ukraine has pushed up fuel prices. Russia accounts for around 10 percent of the world’s oil supply, and Ukraine is a major wheat supplier, so the war is also pushing up the price of bread, particularly in poorer countries that depend more on imports and where people spend a higher percentage of their income on food. In addition, prices have been rising because of supply chain problems related to Covid-19 in China and because of the side effects of three otherwise positive trends: trillions of dollars of stimulus payments injected into the economy, increased wages because of people quitting their jobs, and surging demand as the world recovers from a global pandemic.

The Federal Reserve decided last week to lift interest rates for the first time since 2018 in an effort to curb inflation, and it expects to raise rates six more times by the end of this year. Raising interest rates and making money more expensive is the only real tool governments have to fight inflation, but it inevitably contracts the economy by making it harder for businesses to borrow money.

In “Laudato Si’,” Pope Francis wrote that to “blame population growth instead of extreme and selective consumerism on the part of some, is one way of refusing to face the issues.

“On the one hand, we want people in poor countries to have the same quality of life as we do in the West,” Mr. Annett, a former speechwriter for the I.M.F., told me. “On the other hand, the high growth model of rich economies might need to be questioned.”

And the problem need not be too many people. In “Laudato Si’,” Pope Francis wrote that to “blame population growth instead of extreme and selective consumerism on the part of some, is one way of refusing to face the issues. It is an attempt to legitimize the present model of distribution, where a minority believes that it has the right to consume in a way which can never be universalized, since the planet could not even contain the waste products of such consumption” (No. 50).

In the end, Americans (and citizens in a growing number of countries) might have to question their “love for their cars and trucks,” said Mr. Annett. That means the suburban way of life—people living far from their jobs, in houses with more bathrooms and bedrooms than they need—might be in jeopardy.

True, the same nations are spending trillions of dollars to “decarbonize” everyday life, installing solar panels and driving electric cars. But decarbonizing essential parts of the industrial sector could cost up to $21 trillion by 2050. Inflation is a reminder that making a carbon-reduced way of life that meets basic needs and is affordable for everybody is one of the trickiest questions facing humanity. And that is not negotiable.

[Also by John W. Miller: “The Great Resignation and anti-work movement: Catholics should celebrate the changes to our labor market” and “The defense industry will profit from war in Ukraine—with your money.”]