It’s time to bust up the Major League Baseball monopoly 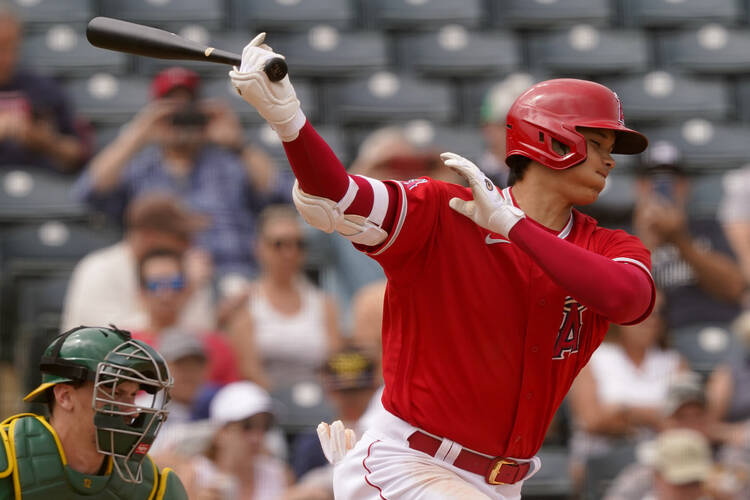 Shohei Ohtani of the Los Angeles Angels strikes out against the Oakland Athletics during a spring training game on March 28, 2022, in Tempe, Ariz. (AP Photo/Matt York)

The church of baseball throws open its doors on April 7. But Opening Day almost didn’t happen this year because of an acidic labor dispute, during which Major League Baseball’s 30 owners imposed a lockout on its 1,200 players.

Last month, after a marathon of meetings, the two sides signed a new contract, which raised pay for baseball’s younger players—hiking the minimum salary to $700,000 from a meager $570,500—and instituted a lottery system so that the worst teams are no longer automatically rewarded with top draft picks.

The problem is that baseball is monopolistic business that overcharges, underpays and doesn’t give fans enough choices.

Players and owners also agreed on some rule changes. The designated hitter rule is now the law of the land in the National League. So no more Bartolo Colón dingers. (Sorry, America editor and Colón superfan James T. Keane.) There will be 12 teams in the playoffs instead of 10. Other changes might be in store, including a pitch clock to speed up the pace of play.

The labor conflict also helped to highlight the dysfunction of having a civic institution controlled by 30 for-profit businesses.

Like a lot of sectors of American life, from health care to social media, the problem with baseball is not that it’s a business. The problem is that it is a monopolistic business that overcharges, underpays and doesn’t give fans enough choices. Business, as Pope Francis says, is a noble vocation, but only if it enables human flourishing and sustains broad-based prosperity.

For too many fans, baseball fandom comes with headaches. Tickets are expensive. The average major league game is now over three hours long. And too many clubs don’t field competitive teams. In the last three full seasons, my Baltimore Orioles have lost 333 games, the second-worst stretch of any team since the 1962-1965 Mets. That’s not human flourishing.

Tickets are expensive. The average major league game is now over three hours long. And too many clubs don’t field competitive teams.

There may be millionaire shortstops, but they are only the tip of baseball’s labor force. The 7,000 or so minor league players make wages that are often below minimum, and a recent commitment to provide housing for them failed to make accommodations for players with families. This is not to mention the low-wage workers who make uniforms and baseballs, or the contract workers who sell peanuts and Cracker Jack. The ballpark experience couldn’t happen without these people.

One reason for all these problems is that Major League Baseball is exempted from anti-monopoly laws. This exemption is something you might have heard your dad drone on about, but it is important, and worth a quick history lesson.

In the 1910s, there was another pro league, the Federal League, that offered fans an alternative to the American and National Leagues. But the majors got tired of competing against the upstarts and bought out seven of the eight Federal teams. The remaining club, the Baltimore Terrapins, refused to sell. Instead, it sued, and the case made it all the way to the Supreme Court.

In Federal Baseball Club of Baltimore v. National League of Professional Baseball Clubs—decided one century ago, in 1922—the Supreme Court ruled that professional baseball did not amount to interstate commerce and therefore did not merit regulation under the 1890 Sherman Antitrust Act, which aimed to prevent and punish monopolies. “The business is giving exhibitions of baseball, which are purely state affairs,” the court wrote, essentially arguing that because ground balls don’t cross state lines, it could not intervene. Despite two other court challenges, in 1952 and 1972, Major League Baseball has held onto its protection from antitrust law.

To be sure, various laws and court rulings have given players more rights and, thanks to collective bargaining, higher salaries. But that 1922 court case still keeps the minor leagues locked up in a system where they function as low-wage apprenticeship baseball schools instead of teams actually trying to win games. (It also makes it difficult for major league teams to move. In 2013, for example, a court in California sided with Major League Baseball after it blocked an attempt by the Oakland A’s to move to San Jose.)

The antitrust exemption “allows owners to treat their teams like A.T.M. cards. It exempts them from a bunch of legal and business norms.”

And last year, the M.L.B. cut the number of minor league teams to 120 from 162. Calling team owners “baseball oligarchs,” Senator Bernie Sanders of Vermont decried the move as causing “needless economic pain and suffering, but also breaking the hearts of fans in small and mid-sized towns all over America.” Last month, he introduced the Save American Baseball Act, which aims to strip major league owners of their antitrust exemption.

The antitrust exemption “allows owners to treat their teams like A.T.M. cards,” said Tom Gilbert, author of How Baseball Happened, a history of professional baseball’s origins. “It exempts them from a bunch of legal and business norms.”

Baseball owners like to pretend that they are in a tough business. M.L.B. Commissioner Rob Manfred, whose job is to represent baseball’s ownership class, tried to make that case to reporters in February. “If you look at the purchase price of franchises—the cash that’s put in during the period of ownership and then what they've sold for—historically, the return on those investments is below what you'd get in the stock market,” he said.

Almost certainly, he’s full of it.

Major League Baseball teams as a rule are privately held, meaning their books are usually secret, sparing owners the outrage of fans finding out how much profit a last-place team is making off them. But one team, the Atlanta Braves, is corporate-owned and has to publish its financial results. In 2021, the Braves posted a profit of $104 million on revenue of $568 million, for a profit margin of 18 percent. That’s a good return on investment.

What would happen if Senator Sanders’s bill, or similar legislation, strikes out the antitrust exemption? Franchises could move more often, breaking hearts but creating a more organic business environment; if fans wanted to keep their team, they would have to attend games. You might have three or four major baseball leagues. I might become a fan of the rebooted Baltimore Terrapins. There would be many more minor and regional minor leagues all over the country. Without ownership collusion on minor-league salaries, those players could make a liveable wage. New teams might be able to sue and win the right to use publicly funded stadiums.

But as with any church, change in baseball is difficult to imagine. It feels too big. I know I’d cry a river if the Orioles left Baltimore for Nashville.

But the truth is that baseball needs a shake-up. Major league basketball and football, which operate without antitrust exemptions, have passed baseball in popularity. In 2021, average attendance was only 18,651 per game, a 37-year low, down from 28,203 in 2019.

If America is breaking up with baseball, maybe it is time to break up baseball.

[Also by John W. Miller: “The defense industry will profit from war in Ukraine—with your money” and “Is inflation just telling us that our way of life is too expensive?”]