Interview: One year after a coup in Myanmar, Cardinal Bo on the chances for peace 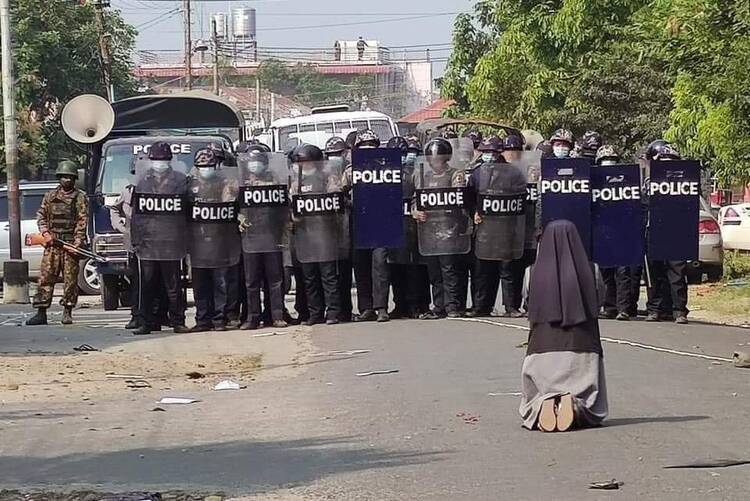 The world was shocked on Feb. 1, 2021, when a military junta in Myanmar, claiming election irregularities, arrested Nobel Peace Prize laureate and national leader Daw Aung San Suu Kyi. The coup overturned the nation’s fledgling democracy, leading to the arrest or exile of many leaders of Ms. Aung San Suu Kyi’s National League for Democracy. The N.L.D. had won a landslide victory in November 2020, soundly defeating the military-sponsored Union Solidarity and Development Party.

Senior Gen. Min Aung Hlaing, the commander of Myanmar’s military, known as the Tatmadaw, led the junta that seized power that morning. Unlike previous reversals of democratic expression in Myanmar, this time the military has been challenged from the beginning by activists and average people, unwilling to surrender 10 years of economic and political gains since the generals last ruled the nation. Now many protesters are joining long-standing resistance movements against the Tatmadaw, and violence has been on the rise.

“Covid and the conflict broke our communities. I do hope and pray that the situation will be under control soon, but rebuilding trust and rebuilding our institutions will be a long, arduous task.”

More than 1,500 people have been killed by security forces since the coup, and almost 9,000 have been detained. More than 405,00 have been internally displaced as the military razes villages to root out resistance and 32,000 have become refugees. An unknown number of activists, journalists and everyday people have been tortured and disappeared. The military has been accused of human rights abuses in its campaign to solidify its rule.

Catholics represent a tiny minority of the population in this largely Buddhist nation. Since the conflict expanded out of large cities and into semi-autonomous, ethnic-minority regions, Catholic churches, where many villagers sought sanctuary, and humanitarian aid workers have been targeted by security forces.

In a statement released on Feb. 1, Jesuit Refugee Service urged that the people of Myanmar not be forgotten, calling on the international community to “join forces with those seeking a resolution to the crisis to ensure that families are brought back together, children are able to go back to school, adults are able to work again and all are able to reconcile with God, self and others.”

Cardinal Charles Maung Bo of Yangon has repeatedly called for the release of political prisoners, dialogue and the end of all violence. He agreed to an interview, conducted this week by email, to assess the political conditions in Myanmar and chances for peace in the future one year after the coup.

What is your assessment of the political situation at this time? Is it stabilizing—that is, people becoming resigned to military rule—or is it on the verge of becoming much worse as more people join the resistance?
There is a stalemate. Covid and the conflict broke our communities. I do hope and pray that the situation will be under control soon, but rebuilding trust and rebuilding our institutions will be a long, arduous task. Unfortunately, the conflict is becoming more brutal; the atrocities are more shocking each day.

Our people are not resigned. They seek peace with dignity and a country that will be reborn through reconciliation. People always have a choice, even when they feel trapped. But violence is not the only way to confront evil, nor is it an effective way. It tends to only breed more violence. There is always the path of dialogue, peace and reconciliation. I believe in dialogue. I urge all to reject armed response.

What is your message for Myanmar’s military leaders?
I have issued many statements since my first response on Feb 3, 2021. In that statement, I deplored the military intervention. I forecast the possibility of bloodshed. I pleaded with the army that the conflict it initiated is not against an external enemy. The Tatmadaw was inflicting harm on the sons and daughters of this nation. I sought the release of all political prisoners. I feared for the youth. Those are my messages today as well.

“Our people are not resigned. They seek peace with dignity and a country that will be reborn through reconciliation.”

As a Salesian I have special concern for youth. I appealed to the youth directly many times, saying that I understand their pain, though I may not agree with their solutions. I am deeply concerned that this nation may lose its youth either to total frustration or hatred or desire for revenge. It is our moral duty to protect them. I continue to appeal to the military to understand the youth, their sense of deprivation, their deep disappointments. Some have sought armed response.

My message is the same to all combatants. Stop the fighting, cease the violence. Allow humanitarian assistance to the displaced people. Let the people find safety. In that the army can play a major role.

Are Myanmar's minority Catholics particularly at risk? Are churches still under attack?
The churches have suffered greatly because many of the areas of ethnic minorities where much of the fighting is now has high numbers of Christian people. Churches have been hit by artillery and airstrikes. People who take refuge in church properties have not been safe.

Yes, risk is greater in many areas where Christian populations are concentrated. But we need to be cautious. All kinds of people have suffered in this unfortunate, tear-filled saga. Everybody is affected. See the reports of the United Nations. Millions are hungry. We seek peace for all people in all areas. We as the Myanmar people need to settle this issue, not allowing any group to claim victimhood.

It seems as if many around the world are coming to accept authoritarian rule and are not as eager to defend democracy as a political idea/system worth preserving. Are you worried that the world has moved on from the crisis in Myanmar and is no longer advocating for a peaceful resolution?
The United States is a worthy case study. Democracy has taken a beating in that country. Even a year after the election, that great citadel of democracy is in a turmoil. The events of Jan. 6 might have provided an inspiration here to contest a legitimately won election. What happens in many countries where authoritarianism is asserting itself is a reflection of the visceral wound inflicted on democracy in many parts of the world.

“People always have a choice, even when they feel trapped. But violence is not the only way to confront evil, nor is it an effective way. It tends to only breed more violence.”

Of course, the world is distracted by the terrible events in Afghanistan, Ukraine and Ethiopia. And it is true that many companies big and small are distancing themselves from the shady enterprises in Myanmar and withdrawing from the collapsing economy, but I hope that the world can show greater attention to solving the issues of Myanmar.

But not everyone is neglecting Myanmar. We thank you and your readers for considering us in our time of need.

Your Christmas meeting with General Min Aung Hlaing proved controversial. Do you regret it now? What is your relationship now with the general and other government leaders?
The photos released to the media were unfortunate. That was out of our control, once I had agreed to the meeting. But I was very candid in my intention. I do not regret it in any way. We need to engage the major stakeholders in this country.

From day one of the political shift, I sought to meet both the democracy leader and the army. The invitation was always there.

It came during Christmas time. I had a clear plan to engage the army on major issues. The senior general knew that he could speak to me and I hoped he would listen. We had a long private conversation on that occasion in which he promised many things. We wait now to see the outcome.

That meeting has not deterred me from issuing a strong condemnation of the obscene actions on Christmas Day. Those of us living in this country and who have experienced its history know that all actors in this challenging country need to be engaged.

“We seek peace for all people in all areas. We as the Myanmar people need to settle this issue, not allowing any group to claim victimhood.”

Yes, it was not to the liking of some. The photos conveyed a quite different message. I continue my efforts and remain hopeful of good results in the long run, at a time when a resolution can be found through dialogue. I am convinced I have the interests of the Myanmar people in my heart.

Pope Francis gave a great mission for the church to be the peacemaker in this country. My Christmas meeting was intended to fulfill that mandate.

The Catholic Church is a minority in Myanmar. Does it have to move cautiously at this dangerous time? What positive role can it play?
Everyone is acting cautiously now because the military is clearly deadly serious. But everyone has a role to play in seeking peace, in praying for peace. Peace is the only way, and the minority church needs to work together with all other religious brothers and sisters in bringing peace.

How can the international community help? Can the global church do more? Can the United States play a more effective role?
We believe that the Myanmar people have to resolve this matter. At the same time, we appreciate that the international community, including China and Japan as well as the Association of Southeast Asian Nations, has a role to play. The United States is encouraging ASEAN to exercise a clear role.

In this way ASEAN can also grow in solidarity among its members. ASEAN has put minimal conditions for Myanmar participation as a member: Stop the armed attacks, release all political prisoners, allow dialogue among stakeholders, provide urgent access for humanitarian assistance. The humanitarian aid must get through to the people in need, both within the country and at our frontiers.

About prisoners: Of course, anyone unjustly imprisoned should be released immediately. So many of these people were running the government a year ago. They are our people and they need to be released and involved in the reconciliation process. That is the only way.

I am sure the army will understand this sooner or later.

Updated Feb. 1 with latest refugee and internally displaced people figures from the United Nations and to include a statement from Jesuit Refugee Service.