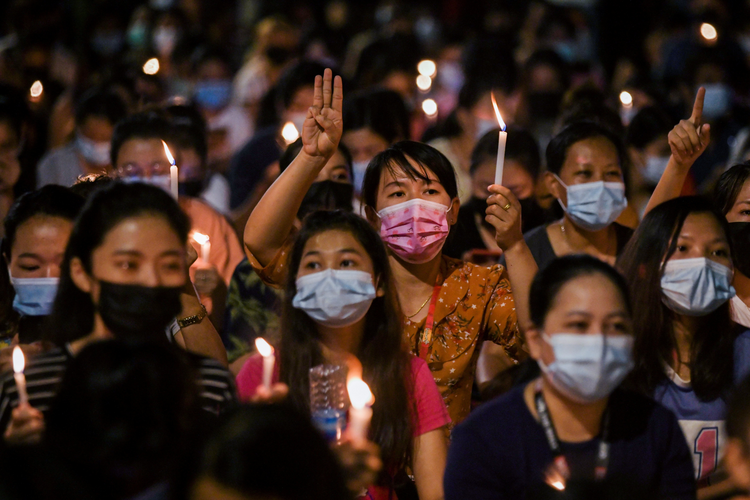 The annual World Day of Prayer for Myanmar on March 14 took on an added urgency and poignancy this year as violence against pro-democracy demonstrators escalated sharply over the weekend. With the Myanmar military taking a more direct role in efforts to suppress protests, the death toll rose quickly on Sunday. At least 38 people were killed on March 14. The same day, Myanmar’s military rulers declared martial law in parts of Yangon, the nation’s largest city.

More than 120 protesters have been killed since demonstrations began against the junta after it seized control on Feb. 1, rounding up leaders of the National League for Democracy, nullifying its resounding electoral victory and placing Myanmar leader Daw Aung San Suu Kyi once again under military detention.

Cardinal Charles Maung Bo, archbishop of the Archdiocese of Yangon, in a homily for the day of prayer, deplored the return of the junta and the rising violence and disorder in Myanmar. He said the country is now experiencing “yet another chapter of darkness, bloodshed and repression.” The “amazing courage, commitment and creativity of our people” in resisting the coup has been met with “bullets, beatings, bloodshed and grief,” he said. “So many have been killed or wounded in our streets, and so many thousands have been arrested and disappeared.”

With the Myanmar military taking a more direct role in efforts to suppress protests, the death toll rose quickly.

In previous messages he has urged an end to the violence and the release of all political detainees, including Ms. Aung San Suu Kyi. In an open letter to the people of Myanmar released on March 15, he said, “As the leaders of the Myanmar Catholic Church... we urge all parties in Myanmar to seek peace…. The blood spilled is not the blood of an enemy. It is the blood of our own sisters and brothers, our own citizens.”

He continues to believe that the tiny church in Myanmar—the nation’s 700,000 Catholics represent about 1.2 percent of Myanmar’s population—can be a witness and “an instrument for justice, peace and reconciliation.”

Hope is at the heart of the Christian faith, he said in his homily, adding, “We, the Church in Myanmar, hold on to that message [of hope]. We will pray and work for a new Myanmar to be born out of this current tragedy, a Myanmar where truly every human being has an equal stake in the country and equal rights to basic freedoms, a Myanmar where ethnic and religious diversity is celebrated and where we enjoy real peace, a Myanmar where the soldiers put down their guns, step back from power and do what an army is meant to do: defend rather than attack the people.”

William Headley, C.S.Sp., is a staff member with the Catholic Peacebuilding Network and was the founding dean of the Kroc School of Peace Studies at the University of San Diego. At the cardinal’s invitation, he has in the past traveled to Myanmar with Catholic Relief Services to conduct peace-building training with Yangon’s priests and bishops.

According to Father Headley, the cardinal is well aware of the delicacy of his position as the leader of a minority faith in Myanmar in terms of confronting the acts and intentions of the military. But his focus on using the church as a national peace-and-reconciliation builder is nothing new, Father Headley said. “He has been extraordinary in terms of trying to educate his own priests and his fellow bishops to the cause of peacebuilding long before he got into this situation.”

“As Óscar Romero was able to address the military in his own environment, Cardinal Bo is doing the same in his context today.”

Listening to his appeals this week for Myanmar military to cease the repression of the pro-democracy demonstrators, he said, “As [St. Óscar] Romero was able to address the military in his own environment, Cardinal Bo is doing the same in his context today.”

Christine Schraner Burgener, the United Nations special envoy on Myanmar, strongly condemned the bloodshed as the military defied international calls, including from the U.N. Security Council, for restraint, dialogue and full respect for human rights and fundamental freedoms.

“The ongoing brutality, including against medical personnel and destruction of public infrastructure, severely undermines any prospects for peace and stability,” she said in a statement on March 14. “The international community, including regional actors, must come together in solidarity with the people of Myanmar and their democratic aspirations.”

While the brutal suppression of the anti-coup demonstrations has gained the most attention from the international press, in his homily Cardinal Bo pointed out that the military had taken advantage of the crisis to clamp down on resistance forces in Myanmar’s ethnic states, “including in places where ceasefire agreements had been signed some years ago.”

“The military is once again attacking civilians, displacing thousands and exacerbating a humanitarian crisis that was already in existence but is now even more severe,” he said.

Cardinal Bo noted in his statement that after a decade of political “reform and opening,” many in Myanmar “had glimpsed the sun beginning to rise over our beautiful land and the prospect—however fragile or faltering—of emerging into a new dawn of democracy, freedom, peace and justice.”

Unfortunately, he said, “we have been set back by more than a decade, taken back to the nightmare of military repression, brutality, violence and dictatorship.”

Cardinal Bo: “The military is once again attacking civilians, displacing thousands and exacerbating a humanitarian crisis that was already in existence but is now even more severe.”

He urged prayers for the demonstrators and democractic leaders like Ms. Aung San Suu Kyi, but he also urged prayers for “General Min Aung Hlaing and the military, that just as God turned the heart of Saul on the Road to Damascus, He would change their hearts, make them stand back and prevent them from taking Myanmar further down a path of conflict, repression and destruction.”

Pope Francis has made repeated appeals for the end of violence against pro-democracy demonstrators, urging the military to restore the nation’s course to democracy. On March 3, he said, “I would like to draw the attention of the authorities involved to the fact that dialogue prevails over repression and harmony over discord.

“I also appeal to the international community to ensure that the aspirations of the people of Myanmar are not stifled by violence,” Pope Francis added. “May the young people of that beloved land be granted the hope of a future where hatred and injustice make way for encounter and reconciliation.”

On March 11 a U.S. State Department spokesperson called for the end of violence and detentions and the restoration of civilian rule in Myanmar, threatening sanctions against the junta members. “The military cannot protect itself from the consequences of these actions if it continues down this path,” he added.

More violence was reported around the country on March 15, with at least eight protesters in four cities or towns killed, according to the independent broadcaster and news service Democratic Voice of Burma. Photos and videos posted on social media showed long convoys of trucks entering Yangon.

Pope Francis prays for peace in Myanmar, calling on its leaders to work for the common good
Gerard O’Connell

Complicating efforts to organize new protests, as well as media coverage of the crisis, internet service on cellphones has been cut, although access is still available through fixed broadband connections. Mobile data service had been used to stream live video coverage of protests, often showing security forces attacking demonstrators. The service previously had been turned off only from 1 a.m. to 9 a.m. for several weeks, with no official explanation.

Thirty-four of the deaths on March 14 were in Yangon. At least 22 occurred in Hlaing Thar Yar township, an industrial area with many factories that supply the garment industry, a major export earner for Myanmar. Several of the factories, many of which are Chinese-owned, were set aflame on Sunday by unknown perpetrators.

The torching earned protesters a rebuke from the Chinese Embassy, which in turn received an outpouring of scorn on social media for expressing concern about factories but not mentioning the dozens of people killed by Myanmar’s security forces. Protesters in the past week, in response to increased police violence, have begun taking a more aggressive approach to self-defense, burning tires at barricades and pushing back when they can against attacks.

With reporting from the Catholic News Service and The Associated Press