The church is ‘under attack’ in Myanmar 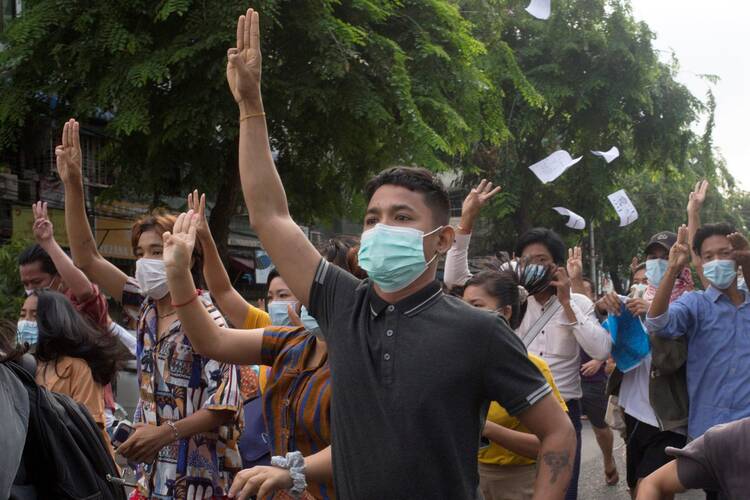 Anti-coup protesters flash the three-finger salute during a protest in Yangon, Myanmar, June 3, 2021. A third church in Kayah state, a Catholic stronghold in eastern Myanmar, was damaged by indiscriminate shelling by the military June 6. (CNS photo/Reuters)

Thousands are in flight across Myanmar because of armed strikes and indiscriminate attacks and arrests conducted by the Tatmadaw, the armed forces of Myanmar, deepening a humanitarian crisis emerging in Kayah and Chin states. According to a community leader from Loikaw, who asked to remain anonymous for fear of reprisals from the Myanmar military, the Tatmadaw “see the civilians as their enemies.”

“No one is safe from their attacks. Anyone they are suspicious of, anyone they think are against them, they will arrest, they will torture and some of them are even shot to death. It happens here every day, so people are hiding.” He said so far 50 have been killed in Kayah State, and many have been wounded. “Even peaceful protesters have been shot.”

Despite that suffering, he expected the resistance to continue. “The people here hate the dictatorship,” he said. “The people are very much united against the military; people want democracy; people want peace and justice.” They want the rule of law, human dignity and freedom of religion, he said. “Especially the young generation.”

“No one is safe from their attacks. Anyone they think are against them, they will arrest, they will torture and some of them are even shot to death. It happens here every day, so people are hiding.”

“This is why they take up arms to defend themselves and their communities.”

The church is under attack

The source in Loikaw said the Tatmadaw have attacked churches and homes with drone and air strikes, mortar and small arms fire, killing noncombatants and driving thousands into the nearby forests and mountains. “The church is under attack” in Kayah State, he said, both the “People of God” and church buildings.

Four churches of the Diocese of Loikaw have come under heavy weapons fire since mid-May. Now most church functions throughout the state have been shut down completely and many parishes are “totally abandoned.”

Ten villages and parishes in the diocese have been emptied of all inhabitants, he said, and in four other parish communities, only the parish priests remain. The Tatmadaw are pursuing members of the Karenni People’s Defence Force, community members who have banded together to resist the military junta.

Even after fleeing into the forests, “every day the people are not safe,” he said. “They have to run from place to place.” Many women and children are among the internally displaced people.

It has become particularly difficult to deliver basic supplies to the people, who are setting up makeshift shelters and camps in the forests, he said. Attempts to deliver food, medicine and clean water have been frustrated by the region’s poor infrastructure, the beginning of the rainy season and by Tatmadaw attacks on humanitarian supply runs.

Ten villages and parishes in the diocese have been emptied of all inhabitants, and in four other parish communities, only the parish priests remain.

He said the people who have fled are hungry and many are suffering from illness, particularly diarrhea, after being forced to drink from contaminated water sources.

He accused the Tatmadaw of criminal acts and possible war crimes. He believes the attack on the Catholic community in Kayah represents an attempt at ethnic cleansing or even genocide. “Kayah State is predominantly a Christian state, and the military supports Buddhism as the only religion of the state,” he said, comparing the attacks on Catholic churches and villages to a similar campaign of terror in Rakhine State in August 2017. Those attacks in the end drove more than 723,000 Rohingya Muslims out of Myanmar into Bangladesh.

The U.N. High Commissioner for Human Rights, Michelle Bachelet, estimates that 108,000 people have been displaced in eastern Kayah State. In a statement released on June 11, she warned of a humanitarian emergency unless the fighting is brought to an immediate halt.

But the opposite appears to be happening in Kayah State in the east and Chin State in the west of the country. “Armed conflict and other violence are intensifying in many parts of Myanmar, including Kayah State, Chin State and Kachin State, with the violence particularly intense in areas with significant ethnic and religious minority groups,” Ms. Bachelet said. “State security forces have continued to use heavy weaponry, including air strikes, against armed groups and against civilians and civilian objects, including Christian churches.

“There appear to be no efforts towards de-escalation but rather a build-up of troops in key areas, contrary to the commitments the military made to ASEAN to cease the violence,” she complained.

Cardinal Charles Maung Bo joined 12 other Myanmar bishops in a statement at the end of their plenary assembly in Yangon on June 11, appealing for prayers for peace and for the creation of humanitarian corridors in conflict zones to reach noncombatants sheltering in the forests.

Even after fleeing into the forests, “every day the people are not safe. They have to run from place to place.” Many women and children are among the internally displaced people.

The bishops suggested that thousands of people, “especially the elderly and children,” were at risk. “We implore that a humanitarian corridor is allowed to reach the hungry masses wherever they are,” the bishops said. “They are our citizens and have the fundamental right to food and security.”

The bishops also urged that churches, monasteries and other Christian and Buddhists places of worship, “where thousands of displaced people have taken refuge,” should be protected from attack, observing international standards “that protect sacred places in times of war.”

Ms. Bachelet laid the blame for the unfolding humanitarian catastrophe squarely at the feet of the Myanmar military.

“In just over four months, Myanmar has gone from being a fragile democracy to a human rights catastrophe,” she said. “The military leadership is singularly responsible for this crisis and must be held to account.”

Across Myanmar, local ethnic and community resistance armies have been joined in recent weeks by young people fleeing Myanmar’s cities. They had been participants in a nonviolent resistance that was met with a ferocious suppression by the military.

Myanmar bishops: “Human dignity is given by God and no amount of violence can deny this aspiration to human dignity. Peace is still possible. Peace is the path.”

According to the Assistance Association for Political Prisoners, almost 900 demonstrators have been killed since widespread protests began in response to a military-orchestrated coup on Feb. 1. More than 6,000 have been arrested and almost 5,000 remain in detention, awaiting trial. The A.A.P.P. reports that 31 of the 178 tried so far have received death sentences.

In the weeks following the coup, sweeping arrests of activists, journalists and opponents of the regime have continued across the country. The high commissioner said she was deeply troubled by reports of detainees being tortured and of collective punishment of family members of activists.

“Rather than seeking dialogue, the military is branding its opponents as ‘terrorists’ and pursuing politically-motivated charges against the democratic leadership,” Ms. Bachelet said.

In a small potential opening to dialogue in beleaguered Kayah State, Reuters reports that the Karenni National Defense Force, one of the largest civilian militias formed to oppose the coup, announced on June 15 that it would temporarily suspend offensive action against the Myanmar army, though it remained committed to its resistance to military rule.

This is not the first time Ms. Suu Kyi, a Nobel Peace Prize laureate, has had to confront Myanmar’s military. She had been under house arrest for 15 years after she had been the victor in another election nullified by the military in 1990.

The military junta claims it will eventually hold new elections, but the country’s military has a long history of promising elections and not following through.

Ms. Suu Kyi has been charged with illegally importing walkie-talkies for her bodyguards’ use, unlicensed use of the radios and spreading information that could cause public alarm or unrest, as well as two counts of violating the Natural Disaster Management Law for allegedly breaking pandemic restrictions during the 2020 election campaign, her lawyers said on June 13.

Human Rights Watch said that the allegations being heard in a special court in the capital, Naypyitaw, are “bogus and politically motivated.”

“This trial is clearly the opening salvo in an overall strategy to neuter Suu Kyi and the National League for Democracy Party as a force that can challenge military rule in the future,” said Phil Robertson, the organization’s deputy Asia director.

“All these charges should be dropped, resulting in her immediate and unconditional release,” said Mr. Robertson. “But sadly, with the restrictions on access to her lawyers, and the case being heard in front of a court that is wholly beholden to the military junta, there is little likelihood she will receive a fair trial.”

The military junta, installed for the duration of its self-proclaimed emergency, claims it will eventually hold new elections, but the country’s military has a long history of promising elections and not following through. The military ruled Myanmar for 50 years after a coup in 1962.

In their statement on June 11, Myanmar’s bishops urged national leaders to “invest in peace.” After seven decades of conflict in Myanmar, “only tears and pain of innocent people remain,” they said. “This country deserves to become part of the community of nations, consigning its past to history and investing in peace. Human dignity is given by God and no amount of violence can deny this aspiration to human dignity. Peace is still possible. Peace is the path.”

Myanmar has not known peace or democracy since it freed itself from British colonial rule in 1948. Ethnic resistance movements that emerged against British and Japanese rule continued to fight central authority in what was then known as Burma, although up until the coup in February a prolonged period of relative calm in recent years had encouraged hope that a peaceful transition to ethnic autonomy or a federalism acceptable to all parties might prevail. That hope has been thwarted now as independence and ethnic liberation movements revive their military campaigns, joined, as they were in a similar uprising in 1988, by pro-democracy demonstrators now prepared to take up arms against the junta.