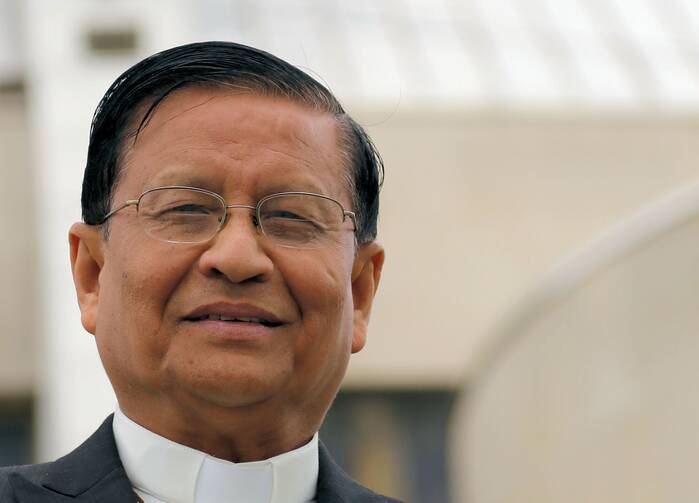 Cardinal Charles Maung Bo of Yangon, Myanmar, is pictured in a file photo. Cardinal Bo is asking the people of Myanmar to say the rosary and participate in eucharistic adoration for peace and justice. (CNS photo/Simon Caldwell)

“Our people need democracy, but they also need daily food,” Cardinal Charles Maung Bo said in this exclusive interview by email with America on May 14. “The conflict has thrown millions into starvation, so there is an urgent need for peaceful solutions.”

He expressed his immense joy, and that of the 750,000 Catholics in this majority-Buddhist country of 52 million people, that Pope Francis has decided to celebrate Mass for peace in Myanmar on Sunday, May 16, in St. Peter’s Basilica.

“We are immensely pleased that the shepherd of the Catholic Church reaches out to our people in their hour of great need, in fulfilling their need to pray together as a community,” he said.

Myanmar has been in turmoil since Feb. 1, when its military leaders rejected the results of democratic elections, launching a coup d’état and imprisoning the country’s civilian leaders. Cardinal Bo said that according to the Assistance Association for Political Prisoners, a nonprofit human rights organization based in Thailand, since then nearly 800 have been killed, 3,000 imprisoned and “unknown numbers...picked up for questioning.” Thousands have been “displaced in the conflicts in [Myanmar’s] Kachin and Karen areas.”

Cardinal Bo: “Our people need democracy, but they also need daily food. The conflict has thrown millions into starvation, so there is an urgent need for peaceful solutions.”

“The political turmoil has taken its toll,” the cardinal said. “The socio-economic conditions are dire. The livelihood of thousands has already been affected by Covid. According to the World Food Program, around two million people are in need of food security. Banks are not functioning well. The economy has stalled. The flight of foreign companies has left thousands jobless.

“Although the protests have come down in number, nevertheless, small spontaneous protests continue every day in the cities and the rural areas, and it looks like a stalemate in many areas. So it is a very challenging time for our people.”

Cardinal Bo praised Pope Francis as “an affectionate pastor, who knows our pain and accompanies faithfully.” He said that “his celebration of the Eucharist in St. Peter’s Basilica for Myanmar comes at the right juncture to console us. It is the culmination of his efforts to bring peace and healing to this nation.”

“Our people are overjoyed at this celebration,” the cardinal said. “They were so inspired by Pope Francis pilgrimage of peace to our country in 2017. It was a dream come true for them. He put this small church on the international map then. His pronouncements, since day one of this political turmoil, are being followed by our people. His words are deeply healing, and this Mass on Sunday will offer an opportunity for them to pray with him for peace.”

Cardinal Bo praised Pope Francis as “an affectionate pastor, who knows our pain and accompanies faithfully.”

Notwithstanding the military-imposed restrictions on social media, the cardinal expects that “most of the Catholics” will be able to follow the Mass online.

Asked if he or other religious leaders have been placed under restrictions of any kind by the military, the cardinal, who has spoken out strongly on several occasions since Feb. 1, said, “There are no open restrictions on religious leaders so far, but we are forced into discretion.” He revealed that “communications are possible with the pope, and the church constantly keeps in touch with us.”

Asked if he has received encouragement and help from the church in other countries, Cardinal Bo said, “The Catholic Church has proved to be ‘catholic’ in reality during our challenge. Almost all the bishops’ conferences reached out to us in sympathy, solidarity and support through prayers, material and monetary support. It is a moving experience to get mail from churches who are so far from us, inquiring in total sympathy about our condition.”

Nearly 90 percent of Myanmar’s population are Buddhist, 6.2 percent Christian, 4.3 percent Muslim, and the rest are Hindu and animist. I asked if there were much dialogue or cooperation between the Catholic Church and the Buddhists or members of other faiths at this time. Cardinal Bo confirmed this is happening through “Religions for Peace,” which “is an organization of all religions working for peace. It had a good profile both with the army and also with the then civil government.”

“The Catholic Church has proved to be ‘catholic’ in reality during our challenge. Almost all the bishops’ conferences reached out to us in sympathy.”

“Through this organization, in the company of Buddhist monks, Muslim scholars, Hindu priests and others we have been working for peace and reconciliation in the country,” he said.

The cardinal recalled that “this spring revolution was led by the young generation, often called Gen Z. It attracted all religious young people, and youth from all religions suffered a lot and were arrested and were also incarcerated.”

“The struggle this time brought a better clarity and collaboration among religions and cultures,” he said.

From the first day of the military coup, Cardinal Bo has repeatedly called for peaceful actions and appealed for dialogue. When asked if there were any signs of dialogue between military and civil leaders, he said: “Sadly there are no clear signs among the stakeholders. Confrontation continues.”

The military detained Aung San Suu Kyi and other democratic leaders on Feb. 1. The cardinal knows the ousted leader and Nobel Peace Prize-winner well, and he would like to visit her and the others, but that has not been possible.

“The way forward is dialogue,” the cardinal concluded. “Guns could not bring peace in this land for the last seven decades…. Peace is the only way forward. Peace is possible!”

Cardinal Bo said that it is difficult to speak to the military leaders: “I know the senior general and the local commanders. We have been communicating through letters, but in-person meetings are still awaited. I do hope to speak to them and facilitate understanding among various stakeholders.”

I asked the cardinal how he read the present situation and if he sees a way forward to resolve the crisis. He responded: “Sadly, there is a deadlock today. Both groups wish to follow their own plans. The army seems to seek coercive methods to bring normalcy, while the protestors wish to form a ‘federal army.’”

But, he said, “this country has seen so much violence yet more talk of civil war will only exacerbate the misery of the simple people. Our people need democracy, but they also need daily food. The conflict has thrown millions into starvation. So there is need for peaceful solutions.”

In addition to all this, the cardinal said, “two sectors of social development—health and education—are gravely threatened. Thousands of doctors and teachers took part in the civil disobedience movement, and now the military government wants to punish them, dismiss them from service. This to me is a retrograde and dangerous move since doctors are urgently needed as the Covid spike in neighboring countries is threatening to invade this country, and millions of children need to return to school.”

“I appeal to all to solve the issues peacefully and get the hospitals and schools going,” he said.

“The way forward is dialogue,” the cardinal concluded. “Guns could not bring peace in this land for the last seven decades…. There is an urgent need to release the arrested people, give due process of law for the leaders, stop the street violence. Peace is the only way forward. Peace is possible!”