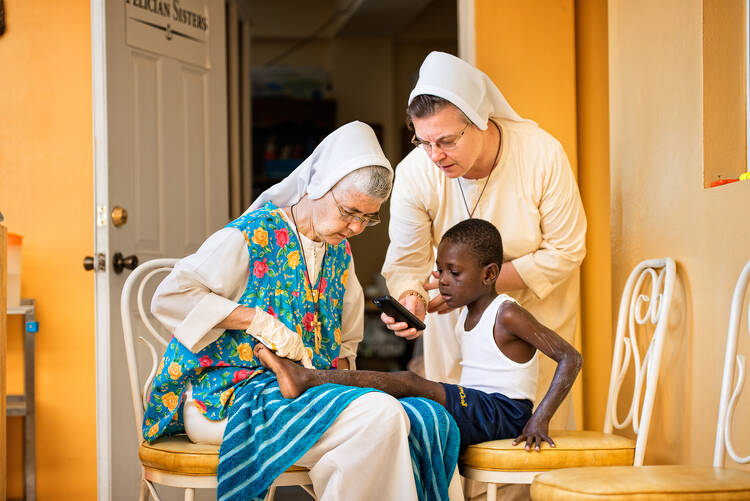 Sister Marilyn Minter was “sitting in my chair praying with the word” when everything began “to shake like crazy” on the night of Aug. 14. She and the other sisters ran out of the Felician community house in Jacmel, Haiti, accompanied by the screams and shouts of the villagers around them. Incredibly, another major earthquake was rocking Haiti.

At 7.2 on the Richter scale, this event was even more powerful than the devastating 7.0 earthquake in 2010. Though the damage, death and injury was much lower this time, it was still significant. More than 2,200 people were killed, and thousands were injured. Haitian authorities report that 329 people are still missing.

Weeks after the earthquake, Haitians are still transitioning into emergency shelters, and relief efforts are stymied by damage to infrastructure and outright banditry on Haiti’s dangerous roads.

Hundreds had to endure amputations because of the severity of their wounds or in the course of efforts to extricate them from collapsed structures. More than 130,000 homes were damaged or destroyed. The city of Les Cayes, Haiti’s third-largest, was the closest to the epicenter of the earthquake and suffered extensive damage. Adding to Haiti’s woes and further complicating recovery, Tropical Storm Grace followed just a few days after the earthquake.

Weeks later, Haitians are still transitioning into emergency shelters, and relief efforts are stymied by damage to already poor infrastructure and the pre-existing problem of outright banditry on Haiti’s dangerous roads, where criminal gangs often wield more authority than police do. The people themselves will often halt relief trucks, Sister Marilyn said, explaining that their needs have become so great that desperation has set in.

“People just need care,” she said. “You have trucks coming in, but people are waiting on the side of the roads, and they’re in such a state that they’re attacking the trucks, and they can’t get through right now.”

The U.N. Office for the Coordination of Humanitarian Affairs reported on Sept. 7 that the disaster response continued to be hampered by access constraints along the main supply route for the delivery of aid to the hardest hit areas in the south of Haiti. According to the United Nations, more than 800,000 have been affected by the disaster and more than 650,000 are in need of emergency humanitarian aid three weeks after the quake.

It is a troubling reality for Haitians that their struggle seems to be brought to wider attention only in the aftermath of catastrophes like the August earthquake.

Sister Marilyn and other Felician sisters began working in Haiti in response to the devastation it experienced in 2010. They have been providing medical, social and employment assistance ever since. Sister Marilyn was organizing the Felician Sisters’ latest relief effort from the order’s motherhouse in Lodi, N.J., as summer concluded.

It is a troubling reality for Haitians that their struggle seems to be brought to wider attention only in the aftermath of catastrophes like the August earthquake. Sister Marilyn has served in Haiti long enough to watch a number of relief efforts come and go without creating much of a long-term impact. The latest calamity may begin that familiar cycle as attention to Haiti’s problems diminishes as headlines detailing the latest crises fade.

Sister Marilyn is determined that the Felician service to the people of Jacmel accomplishes more than applying a Band-Aid to Haiti’s woes. Even before its latest political and natural disasters, Haiti faced profound challenges.

A Humanitarian Needs Overview from UNICEF, released in March, estimated that 4.4 million people in Haiti were food insecure, 217,000 children suffered from acute malnutrition, and 2.95 million people, including 1.2 million children and 400,000 pregnant women and adolescent girls, required emergency health care. The effects of the recent earthquake will exacerbate these vulnerabilities.

But discerning a way to respond to crushing need without contributing to a cycle of individual and national dependency is a constant and difficult balancing act, she said.

And some problems are simply too profound for the sisters even to attempt to address. Government corruption and incapacity, she reported, remain foundational issues. The Felicians focus on listening to the people themselves to learn what needs are most pressing, whether that is job creation or funding a mobile health clinic, then crafting those responses to maximize personal autonomy and civic capacity building.

Beyond its high unemployment and the natural calamities that have enveloped Haiti, the nation has also been troubled by decades of political dysfunction. Its most recent cycle culminated in mid-July with the assasination of the president, Jovenal Moïse. Sister Marilyn allows that Haiti’s chronic social disorder has proved a heavy weight on its people. Many are profoundly depressed. “More people are coming in [to the Felician house], wanting to talk and wanting to share, [asking], ‘How can we make things better?’”

Catholics: Haiti deserves your attention—earthquake or not
J.D. Long-García

The Felician mission is just one of many church-based efforts in Haiti that include Catholic Relief Services, Catholic Medical Mission Board and Caritas Internationalis. Though some effort is made at coordination of these church initiatives, Sister Marilyn believes the collaboration could be stronger to avoid duplicating services.

The economic status quo in a nation where “80 percent of the people are living in poverty” is clearly unjust, Sister Marilyn said. “People just want to have jobs. They want to eat. They want to have gas to drive their car or their motorcycles.”

Everyday people know they have to address the systemic corruption but “how do you do that?” Sister Marilyn reports that activists are starting to speak up, demanding a new presidential election.

To outsiders the situation can appear completely beyond repair, but that is not the reality she has come to know in Jacmel. “People need to hear that Haitians are survivors,” Sister Marilyn said. “They are people of hope.”

The Felician sisters, she emphasized, remain intent on listening and relationship building with the people of Jacmel to help guide their efforts. Sister Marilyn plans to return to Haiti and to the Felician mission there this month, brimming with optimism about a plan to establish a new, job-creating bakery for the people of Jacmel.