Catholics: Haiti deserves your attention—earthquake or not 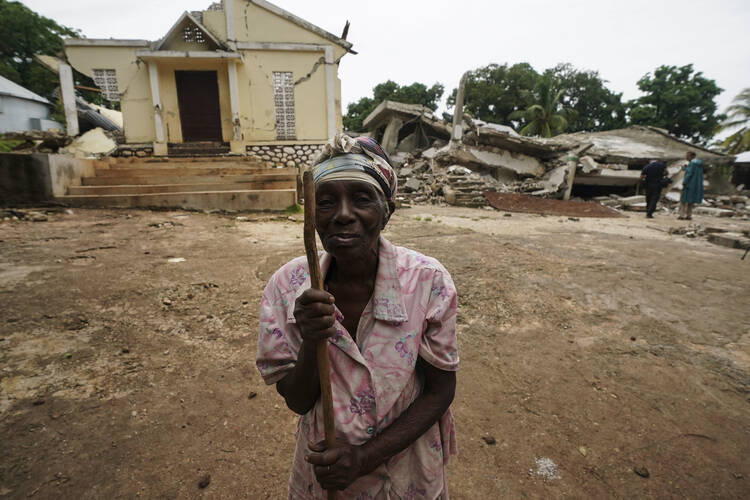 An elderly woman who calls herself Jermeus poses for a photo in front of the hospital destroyed by the earthquake in Fleurant, Haiti, Tuesday, Aug. 17, 2021, three days after the 7.2-magnitude quake hit the island nation. (AP Photo/Fernando Llano)

As I stood in line in the Toussaint L’Ouverture International Airport in Port-au-Prince, I realized someone was staring at me. I had just spent a week covering recovery efforts following the 7.0 earthquake that claimed more than 300,000 Haitian lives in 2010. I had been lost in thought, reflecting on all that I’d seen and all the people I’d met.

“Bonjour,” I said to the man, catching his gaze. I smiled.

“Good morning,” he replied. He could tell, I imagine, that my French isn’t great. He didn’t smile back.

“Are you from Haiti?” I asked him. He told me he was. I told him that this was my first time in Haiti. I said that despite the struggles, I thought it was a beautiful country.

“Haiti is not beautiful,” he told me. Children starve to death here, he said. People have no food, and they are forced to eat the bark off trees or clay from the ground.

“Haiti is not beautiful,” he told me. Children starve to death here, he said. People have no food, and they are forced to eat the bark off trees or clay from the ground. The land is deforested and when it rains, there are landslides. The water is contaminated. People die of illnesses here that they simply don’t have to deal with in other countries. It’s nearly impossible to escape poverty if you’re born into it.

I don’t remember what I said in response to him, if anything. It isn’t important.

What I meant was that the people are beautiful. I was in awe of how communities, especially in rural areas, banded together after the horrific earthquake. I couldn’t imagine my friends and family in the United States surviving such conditions. There is such strength in Haiti, it seemed to me. Somehow, Haitians remained a people of hope. And I thought that was beautiful.

I didn’t know how to reconcile what the man said with the beauty I found. I still don’t. He called my attention to the suffering. He would not tolerate anyone glossing over the pain his people experience with nice words. There is beauty, and there is suffering and death.

There is such strength in Haiti, it seemed to me. Somehow, Haitians remained a people of hope. And I thought that was beautiful.

That reporting trip I made with Catholic Relief Services in 2010 remains one of the most formative experiences I’ve had as a journalist. A week doesn’t go by that I don’t think about it.

I thought about it this weekend, of course, when I read about the 7.2 earthquake that claimed more than 2,000 lives and injured another 10,000. The death toll is expected to go up, and Tropical Storm Grace has complicated relief efforts.

While Haiti vanishes from headlines, the crisis never seems to be over. In recent years, areas of Haiti have experienced severe droughts. Hurricane Matthew ravaged the country in 2016. A cholera outbreak followed the 2010 earthquake, which displaced more than one million people.

That reporting trip taught me many things, but these three lessons standout.

I had reported from other countries before. Oftentimes I would disclose that I am from the Dominican Republic. It helps people understand why I speak Spanish, for example. My father is from the United States, and I’ve been told I look more like him than my mother.

When I arrived in Haiti, it reminded me of the Dominican Republic. The two countries share one island, after all. The smells and the hot, humid air; the casabe, plantains and rice; even the music—it reminded me of home.

When I shared with people in Haiti that I was born in the D.R., I didn’t get the usual response. The Dominican Republic has not treated the Haitian people well over the years.

But when I shared with people in Haiti that I was born in the D.R., I didn’t get the usual response. The Dominican Republic has not treated the Haitian people well over the years. Rafael Trujillo, the dictator of the Dominican Republic from 1930 until his assassination in 1961, ordered the murder of as many as 20,000 Haitian people during his reign.

Today, many Dominicans—including members of my family—maintain an anti-Haitian prejudice. Visiting my family in Santo Domingo as a child one summer, I heard about a tall building that collapsed. Instantly some family members blamed it on the work of Haitian construction workers. As an adult, one of my aunts told me that the reason the Dominican Republic has economic trouble is because so many Haitians live there.

I have never believed any of the stereotypes. My immediate family taught me they aren’t true. And when I arrived in Haiti, I was reminded of the things we have in common. I assumed that the commonalities I perceived would be the ground for meaningful connections. I was wrong, and I was naïve. I neglected to consider how my Dominican heritage could cloud my interactions in Haiti. So I stopped referring to that part of my background. For the first time, I was ashamed of it.

During my reporting trip to Haiti, Bishop Pierre-André Dumas, then-president of Caritas in Haiti, told me that too few Haitians know about their forefathers. The bishop talked about François-Dominique Toussaint L’Ouverture, for whom the Port-au-Prince airport is named.

A freed enslaved person, Toussaint L’Ouverture stood up to Napoleon and led the Haitian Revolution that set the country free from France more than 200 years ago. Bishop Dumas explained to me that the the white strip on the Haitian flag was ripped from the middle of the French flag and set sideways. Haiti became the second republic of the Western Hemisphere in 1804.

Haiti, or Saint-Domingue as it was known under French rule, had been France’s richest colony, producing an abundance of cotton, coffee and sugar cane. In 1825, France sent warships to Port-au-Prince and forced Haiti to compensate French colonists for lost land and enslaved laborers. The country did not pay off this debt until 1947. Coups and dictators over the following decades escalated Haiti’s debt, and it has never recovered.

“We want a national dialogue to make the Haitian people aware of what we call ‘the ideas of the fathers.’ We lost that,” Bishop Dumas told me in 2010. “We want to make the people very involved with the process.”

Knowing Haiti’s history not only helps understand the seemingly endless suffering but also gives a reason for hope, Bishop Dumas told me.

“We must be patient, but at the same time, we must put up signs for the people and for the state,” he told me of the church’s role. “We must reassure them that this is possible.”

Knowing Haiti’s history not only helps understand the seemingly endless suffering but also gives a reason for hope, Bishop Dumas told me. Reporting on Haiti that neglects the historical dimension is incomplete.

3. The story isn’t over simply because we’re tired of it.

Days after the most recent earthquake in Haiti, the news is already fading. You won’t find Haiti on the USA Today homepage, for example. Meanwhile the Associated Press reports that victims from the latest earthquake are overwhelming hospitals.

After the Jan. 12, 2010, earthquake, news from Haiti faded as well. It came back that October during a cholera outbreak and when news outlets did their “one year later” pieces, as custom seems to dictate. But then Haiti seemed to vanish from the news once again.

We must give Haiti our attention, with or without earthquakes and hurricanes. People are suffering there every day, and most of the time, we aren’t paying attention.

For my part, I did a few reports here and there about local outreach efforts; a number of U.S. parishes have ongoing partnerships with parishes in Haiti for relief efforts. In 2016, I wrote a story about displaced Haitians at the U.S.-Mexico border.

America has published a number of stories focused on Haiti, including takes from Archbishop Thomas Wenski of Miami on sustainable change and Colby Bowker, vice president of The Haitian Project, Inc., on racial justice. Catholic News Service has provided ongoing coverage of Haiti, including the assassination of President Jovenel Moïse. But we could all write more.

How often do we, as Catholics, take the time to read stories about Haiti? And how do we respond? I’m sure relief agencies are seeing a surge in donations in the wake of the most recent earthquake. But if the Haitian people are going to lift themselves up out of poverty, they need long-term commitments from those who would claim to be their friends.

We must give Haiti our attention, with or without earthquakes and hurricanes. People are suffering there every day, and most of the time, we aren’t paying attention. As Bishop Dumas said, change in Haiti will take decades. But it is possible.