‘We need to mandate the vaccine’: Sister Mary Haddad, head of Catholic Health Association, is ready for bold action 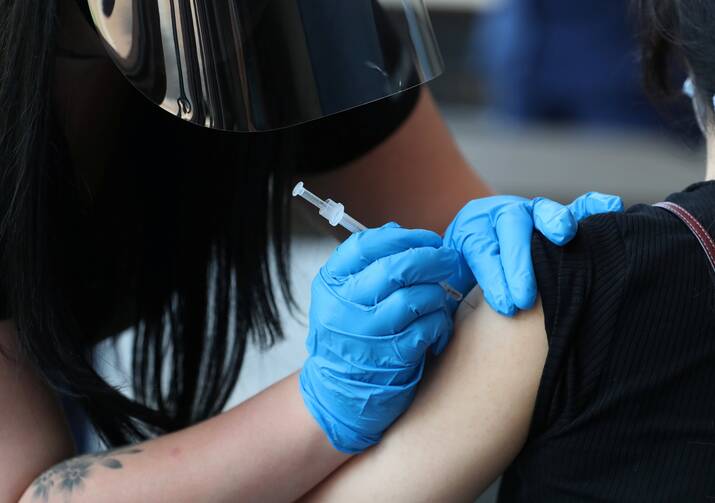 A student receives a COVID-19 vaccine dose on the campus of the University of Memphis in Tennessee July 22, 2021. (CNS photo/Karen Pulfer Focht, Reuters)

The Covid-19 Delta variant is propelling the kind of new case numbers that many Americans believed were finally behind them in May. Instead of making plans for a “normal” late summer and fall, many around the country—particularly in Florida, Louisiana, Missouri and other states with high percentages of unvaccinated residents—are facing the possibility of revived mandates for mask wearing and social distancing. The proposals for restored safety protocols have provoked furious resistance from vaccine skeptics and escalating exasperation from vaccinated people frustrated by the prospect of returning to precautionary regimes because of what they perceive as the ideological recalcitrance of a minority.

One staff member at a social service agency in a Southern state, who asked to remain anonymous because of the sensitivity of his comments, was not feeling too optimistic about his agency’s chances of turning back rising Covid case numbers, pointing out that resistance to vaccines had become embedded in his community.

Employer mandates that require proof of vaccination or regular Covid testing for workers who decline to get vaccinated had been rare before the Delta variant drove U.S. numbers back to the top in global rankings of confirmed Covid cases with more than 118,000 a day. By the end of July federal and state officials began issuing mandates for employees within their jurisdictions, and this week, as the Delta variant rages across the South, a number of major U.S. corporations and health care providers have begun to issue them as well.

“I do believe that we need to mandate the vaccine.”

Mary Haddad, R.S.M., the C.E.O. and president of the Catholic Health Association, agrees that more must be done now to halt the advance of the Delta variant.

“I believe that there is a moral responsibility for all in health care professions to be vaccinated, period,” she said. “I feel very strongly about that because you are potentially putting others at risk because of your inability to protect yourself and to do what you can in order to mitigate this increasing surge.

“I do believe that we need to mandate the vaccine.” That is a personal, not institutional position, she emphasized, but an issue she has been pressing among C.H.A. members. As a collective, C.H.A. has to move cautiously, and litigation and union pushback are among the issues she keeps in mind, but “I’m at the point of saying, ‘I don’t care. I’m human; we’ve got to get control of this [pandemic].”

While dialogue over a vaccine mandate continues, 10 C.H.A. member networks have forged ahead on their own. On Aug. 3, PeaceHealth, a health care network serving Washington, Oregon and Alaska, became the latest C.H.A. member institution to issue an employee mandate. Beginning Aug. 31, the network’s caregivers will be required to be vaccinated against Covid-19 or submit a qualifying medical exemption.

According to a PeaceHealth statement to the press, “Unvaccinated individuals will be subject to regular COVID-19 testing, as well as additional masking, potential reassignment to non-patient care settings, and other safety protocols.” The policy applies to all caregivers, “including providers, students, contractors, vendors, and volunteers.”

Remembering a call to serve

Sister Haddad said some C.H.A. members are waiting for final approval from the Food and Drug Administration. on Covid-19 vaccines before issuing their own mandates. That may come as soon as the end of August. She added that other C.H.A. members are worried that a mandate will lead to significant staff loss at a moment of acute peril, especially as hiring new health caregivers has become a challenge in a tight job market.

That is a legitimate concern, Sister Haddad acknowledged. “Our nursing staff is in dire straits,” she said. “We have a lot of nurses who have contracted Covid. We have…people who leave the profession because they don’t want to be exposed.” Many fear bringing Covid-19 home to their families. And after month upon month of high-stress working conditions because of the pandemic, many health care staff are experiencing professional burnout.

Sister Haddad appreciates that dilemma, but after watching the disaster of Covid unfold across the country in multiple waves, a horrific “Groundhog Day” for overworked nurses and doctors, she is running out of sympathy for caregivers who remain resistant to vaccines.

“These [vaccines] are morally acceptable, and people should be getting these vaccines.”

Working in health care, she said, “is a call to serve because of what we believe, in the love of another. And if we’re out there for what’s best for me and not for another, then I think people need to be rethinking why they even got into the profession.”

Noting that major corporations in other industries have already stepped up to impose mandates, she said, “Health care should be setting the standard for this.”

“I so firmly believe that we have a moral responsibility because of the role that we play.”

Sister Haddad has been equally frustrated at times by the leadership from the U.S. Catholic community as the crisis continues. The church has not been well served by some bishops’ statements, she said. “These [demands for] religious exemptions are just driving me mad. There's no grounds for this, at least in the Catholic faith. We've been very clear [and] the Vatican has been very clear that these [vaccines] are morally acceptable, and people should be getting these vaccines.”

Covid-19 vaccines have been created following the same production and testing regime of other vaccines that have been accepted by the Catholic community without controversy for decades, she pointed out. “My God, are we going to start no longer having children vaccinated for measles, mumps and rubella?”

“I think these mixed messages are not giving sound, strong guidance and the leadership that is needed right now.”

Over the course of the pandemic the Centers for Disease Control and Prevention has frequently been criticized for its at-times mixed and contradictory messaging. “Well, you know what? Science evolves,” Sister Haddad said. “We’re building the plane while we're flying, right? We're learning about this as it overtakes us, and so things will change and [get tweaked] and science grows through the experience. But there's nothing going to change about what came out from the Pontifical Academy for Life and from the Vatican [on the ethics of vaccines], so why do we keep fighting that battle?

“We have to be careful that we have a unified voice because we are providing leadership to the faithful.”

While people who remain unvaccinated even after hearing a litany of Covid-19 horror stories emerging from emergency rooms and intensive care units are often assumed to represent “no vax” dead-enders, a recent New York Times article pointed out that many presumed resistors do not have ideological or religious objections to Covid-19 vaccines. They may be simply unable to reach vaccination sites because of work or family obligations, transportation limitations or because they reside in communities that have been historically underserved by local health care systems.

In some communities, outreach from dioceses, Catholic Charities USA offices and C.H.A. network members has attempted to bridge that last mile between unvaccinated people and the Covid shot. In Texas, New Jersey, Nevada and other states, local Catholic Charities offices have helped sponsor vaccination clinics (often parish-based) in underserved communities and programs for homeless people. In Washington the archdiocese has done the same. Other Catholic Charities offices have set up their own testing and inoculation facilities. Many provide transportation to vaccination sites.

Will it all be enough?

Confronting a culture of isolation

Early in the pandemic, Sister Haddad said, C.H.A. members were learning from the crisis, discovering the gaps that Covid-19 revealed in the U.S. health care system—the poor state of public health facilities, the inadequacies of the nation’s long-term care and mental health services, and “that racism is a public health crisis.”

Now, she suggests, the pandemic is offering another lesson—not about the nation’s diminished public health infrastructure but about the perilous state of the American psyche.

“I think a lot of people are feeling socially isolated, and there’s a lack of trust; they’re in their own little bubbles,” Sister Haddad said, “and until their world becomes impacted, it’s not going to change much. How do we begin to change it? I think it is really on a one-on-one basis.

The pandemic is offering another lesson—not about the nation’s diminished public health infrastructure but about the perilous state of the American psyche.

“People are getting angry at those who are unvaccinated and saying, ‘It’s the surge of the unvaccinated now.’ We’re passing judgment on individuals without even knowing what the scenario is,” Sister Haddad added. “And it’s not the same for everyone. We can't universalize this. It is really about each person and their story and their need, and how do we begin to help address that and provide an access point for them to be more open to the vaccine?”

For some, she fears, it has taken the loss of a loved one “before they open their eyes to it.”

While health and social service providers contend with the ongoing logistical challenges, it will take an act of intimate conversion, she suggests, to persuade many Americans to accept an inoculation for their own good and the common good.

Fighting the disinformation circulating on social media is only part of the challenge in reaching vaccine resistors. With so much isolation and alienation becoming evident, “is it a little too late” to force solidarity on people? she asked.

“What could we have done earlier in order to help folks feel more a part of their community, so that they, too, would be motivated to do their role in protecting their neighbor?” Sister Haddad wonders.

“For people who have felt so isolated, not a part of the good to begin with, why would they want to be a part of it now?”