Do not give religious exemptions for Covid vaccines, New York archdiocese tells its priests 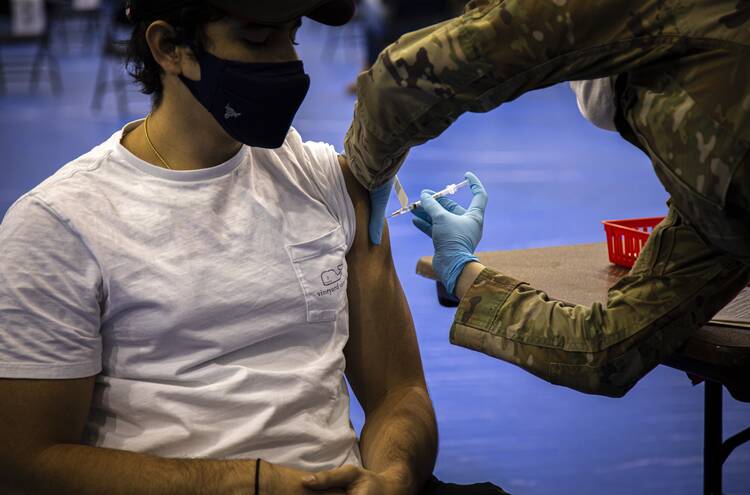 Support for the coronavirus vaccines has been strong from a range of Catholic leaders, from Pope Francis to the U.S. Conference of Catholic Bishops and the Catholic Health Association. Some Catholics remain wary of the vaccines and say their religious beliefs about abortion make them unethical, but the nation’s second largest archdiocese recently distributed a message to priests: Do not lend legitimacy to the notion that the church supports Covid-19 vaccine exemptions.

“Pope Francis has made it very clear that it is morally acceptable to take any of the vaccines and said we have the moral responsibility to get vaccinated,” reads a July 30 memo that the Archdiocese of New York confirms that it sent to its priests. (The confirmation came after a correspondent for The Epoch Times shared an image of the memo on Twitter over the past weekend.) “[New York] Cardinal [Timothy] Dolan has said the same.”

“Pope Francis has made it very clear that it is morally acceptable to take any of the vaccines and said we have the moral responsibility to get vaccinated.”

“There is no basis for a priest to issue a religious exemption to the vaccine,” it continues. “By doing so he is acting in contradiction to the directives of the Pope and is participating in an act that could have serious consequences to others.”

The memo examines a hypothetical situation in which a student receives a vaccine exemption based on religious belief and then is responsible for an outbreak at school.

“Clearly this would be an embarrassment to the archdiocese,” the memo states. “Some even argue that it might impose personal liability on a priest.”

The memo was distributed to parish leaders on behalf of Cardinal Dolan and was signed by Msgr. Joseph LaMorte, the vicar general of the archdiocese, and John P. Cahill, the archdiocese’s chancellor.

Earlier this year, a handful of Catholic bishops cast doubt on the morality of the vaccines by citing their remote connection to cell lines derived from aborted fetuses. But Catholic ethicists, both at the Vatican and in the United States, said church teaching was clear when it came to the vaccines, with some going so far as to say Catholics had a moral obligation to be vaccinated.

Earlier this year, a handful of Catholic bishops cast doubt on the morality of the vaccines by citing their remote connection to cell lines derived from aborted fetuses.

Even the head of the U.S. bishops’ pro-life committee, Bishop Kevin C. Rhoades, stated in March that the vaccines are “morally acceptable to use.”

Earlier this year, the Vatican stopped just short of issuing a Covid-19 vaccine mandate for its roughly 5,000 employees. A Feb. 8 decree signed by the governor of the Vatican city-state said that employees who opt out of vaccination without a proven medical reason could be subject to a sanction up to and including “the interruption of the relationship of employment.”

In recent months, a number of Catholic colleges and universities have announced that students will be required to be vaccinated against Covid-19 ahead of the upcoming school year. Among them are the University of Notre Dame, St. Edward’s University in Austin, Tex., and Loyola University Chicago, which does allow for religious exemptions.

In recent months, a number of Catholic colleges and universities have announced that students will be required to be vaccinated against Covid-19 ahead of the upcoming school year.

“Loyola University Chicago's immunization/vaccination requirement is informed by our Jesuit, Catholic commitment to the common good, solidarity, and justice,” reads a statement on the school’s website. “Given the serious nature of the pandemic and the safety, efficacy, and availability of the COVID-19 vaccines, we are rightly called to make reasonable efforts to protect one another through vaccination.”

Students may request a religious exemption, though the school notes that not all requests will be granted. As part of the process, students must explain if their religious faith prohibits them from taking vaccines; the school adds that “if it is not an objection to all immunizations you must explain the religious basis for not receiving this particular immunization.”

Boston College is also requiring students to be vaccinated against Covid-19 and though the school also plans to review requests for religious exemptions, it appears unlikely the Jesuit institution will grant them to Catholic students.

“A religious exemption may be granted if vaccination goes against the fundamental tenets of a faith,” schools spokesperson Ed Hayward said in a statement to the Associated Press. “Given that Pope Francis, [Boston Cardinal Sean O’Malley], and millions of Catholics worldwide have been vaccinated, it is difficult for Catholics to make an argument against a COVID-19 vaccination.”

Earlier this month, the Catholic Health Association, which represents more than 2,200 hospitals and health care entities in the United States, signed a joint letter in support of health care systems that require vaccines for their workers “with the appropriate accommodations for medical or religious reasons.”

The publication of the New York memo came just two days after the Catholic Medical Association, a group of Catholic health care professionals that focuses on pro-life issues, released a statement saying it opposed vaccine mandates that do not include religious exemptions. The organization said all the respondents to a member survey “voiced moral/ethical objection to the use of aborted fetal cell lines in development, testing and/or production of all three currently available vaccines.”

The Archdiocese of New York acknowledged that some Catholics continue to voice moral objections to the vaccines.

Vatican tells its employees to get a Covid vaccine, or risk getting fired
Associated Press

“We occasionally hear from Catholics who have a sincere moral objection to the COVID-19 vaccines due to their connection to abortion,” the archdiocese’s memo states. “This concern is paritcualrly acute among people who are strongly pro-life and very loyal to the teaching of the faith. It is a serious issue for some people who often seek guidance and support from the Church.”

Still, the memo is clear that New York priests should not provide any religious exemptions for Covid-19 vaccines.

“Any individual is free to exercise discretion on getting the vaccine based upon his or her own beliefs without seeking the inaccurate portrayal of Church instructions,” the memo says. “Our priests should not be active participants to such actions.”