Catholic bishops must not turn vaccines into a culture war issue 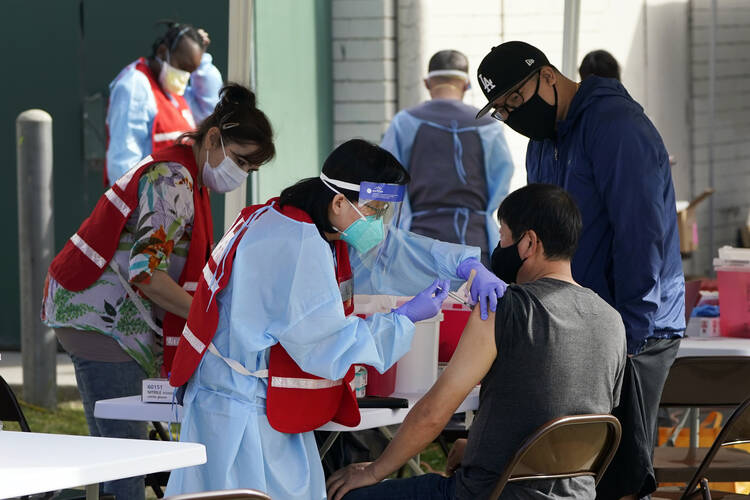 In this Jan. 13, 2021, file photo, health care workers receive a Covid-19 vaccination at Ritchie Valens Recreation Center, in Pacoima, Calif. California will require all of its roughly 2.2 million health care and long term care workers to be fully vaccinated against the coronavirus by Sept. 30. (AP Photo/Marcio Jose Sanchez, File)

As more and more vaccine mandates get rolled out—from companies, universities, cities and soon the United States military, among other entities—debates about religious exemptions to those mandates are also heating up. And within the last two weeks, some Catholic bishops have taken diametrically opposed positions on whether the church should endorse exemption requests. Sadly, these differences, much like earlier confusion caused by Catholic bishops’ statements about vaccines back in March, seem to be influenced more by the “culture war” than the Catholic tradition regarding the common good.

In the Archdiocese of New York, instructions went out to priests on July 30 that they should refuse to sign letters attesting to religious objections to vaccination for Catholics who request them. The memo pointed out that both Pope Francis and Cardinal Timothy Dolan, the archbishop of New York, have confirmed that the available Covid-19 vaccines are morally acceptable, and it described getting vaccinated as a moral responsibility. “There is no basis for a priest to issue a religious exemption to the vaccine,” the guidance said. “By doing so he is acting in contradiction to the directives of the Pope and is participating in an act that could have serious consequences to others.”

These differences, much like earlier confusion caused by Catholic bishops’ statements about vaccines back in March, seem to be explained by some bishops choosing the “culture war” over the common good.

But in Colorado, the state’s four Catholic bishops issued a joint letter that said they were pleased to see that Denver’s recent vaccine mandate included a religious exemption. They described the use of “some” Covid-19 vaccines as “morally acceptable under certain circumstances.” After promising vigilance “when any bureaucracy seeks to impose uniform and sweeping requirements...in areas of personal conscience,” they outlined Catholic teaching on the right in conscience to refuse a medical intervention. Their statement concluded by providing a link to a template letter for Catholics to use, and for their pastors to sign, to exempt themselves on religious grounds from a Covid-19 vaccine mandate.

Five months ago, a number of U.S. bishops and dioceses made news when they cautioned that the Johnson & Johnson vaccine was morally problematic relative to the Pfizer and Moderna vaccines, because of a slightly closer remote material connection to cell lines from aborted fetuses. The Vatican, however, had already clearly stated that all three vaccines were morally acceptable for Catholics. I wrote about the controversy then, arguing that the objections to the vaccines were “more focused on abortion as a front in the culture war than they are on the common good during the pandemic.”

It is dispiriting to see how much of that piece from back in March still works today as an analysis of the statement from the Colorado bishops. The main difference is that the Colorado statement, rather than trying to establish a moral ranking among the vaccines, instead aims to build a Catholic “safe space” for vaccine skepticism and refusal. Unfortunately, that space is based on an incomplete reading of the Catholic moral tradition regarding an informed conscience and a lack of engagement with the Catholic moral tradition on the common good.

Misleading language and selective quotations from the Vatican suggest that the vaccines’ very remote connections to abortion are a greater cause for concern than the church actually says they are.

The Colorado statement and template letter will likely contribute to vaccine misinformation among Catholics, as Matthew Schneider, L.C., has pointed out, through misleading language and selective quotations from Vatican guidance that suggest the vaccines’ very remote connections to abortion are a greater cause for concern than the church actually says they are. (Father Schneider also points out that the Colorado bishops’ statement fails to distinguish between a universal mandate for vaccination and more particularized mandates, such as for an organization’s employees or for workers who will have extensive contact with the public, including vulnerable individuals in health care settings.)

But even if the statement were more careful to protect against contributing to vaccine misinformation, it would still end up misleading Catholics by its selective emphasis on Catholic moral teaching. Put simply, while it is the teaching of the church that individuals must generally be free to accept or reject medical interventions according to their consciences, a properly formed and informed Catholic conscience would not generally reject these vaccines. Such objections, in the face of the church’s repeated assurances that these vaccines are morally acceptable, are better described, as the health care ethicist Jason T. Eberl recently argued in America, as a manifestation of scrupulosity rather than an informed conscience. And especially in the middle of a pandemic that, fueled now by the Delta variant, is again spiraling out of control, a properly formed Catholic conscience should—as Pope Francis and many bishops have said—encourage vaccination as the best available way to protect not only ourselves but others, including the most vulnerable.

A properly formed and informed Catholic conscience would not generally reject these vaccines.

This is not an esoteric application of Catholic doctrine. This kind of attention to the common good is a core principle of the Catholic moral tradition, and it is highlighted in the same sources that the Colorado bishops quote to make their argument for religious exemptions. They offer “relevant points for this personal decision,” listing the first as “Vaccination is not morally obligatory and so must be voluntary.” This is taken from guidance from the Congregation for the Doctrine of the Faith, issued in December 2020, saying that “vaccination is not, as a rule, a moral obligation and that, therefore, it must be voluntary.” Unfortunately, the letter from the Colorado bishops does not engage with the rest of that paragraph from the C.D.F. document, which reads in full (emphasis in original):

At the same time, practical reason makes evident that vaccination is not, as a rule, a moral obligation and that, therefore, it must be voluntary. In any case, from the ethical point of view, the morality of vaccination depends not only on the duty to protect one's own health, but also on the duty to pursue the common good. In the absence of other means to stop or even prevent the epidemic, the common good may recommend vaccination, especially to protect the weakest and most exposed. Those who, however, for reasons of conscience, refuse vaccines produced with cell lines from aborted fetuses, must do their utmost to avoid, by other prophylactic means and appropriate behavior, becoming vehicles for the transmission of the infectious agent. In particular, they must avoid any risk to the health of those who cannot be vaccinated for medical or other reasons, and who are the most vulnerable.

The phrases “common good,” “weakest and most exposed” and “most vulnerable”—or anything like them—cannot be found in the letter at all. Nothing in the letter suggests that a person who refuses vaccination has to think about anyone else’s risk at all or do anything to mitigate it.

The letter from the Colorado bishops has not misrepresented any Catholic teaching; what it says about Catholic teaching on the right in conscience to reject medical interventions, and that decision requiring particular judgments about benefit in relation to burden, is true. And the bishops involved themselves support and recommend vaccination, as Bishop Stephen Berg of Pueblo explained in an interview with Crux. But unfortunately that support is not emphasized in the letter they issued. Instead, it represents a kind of tunnel vision, hyperfocused on avoiding extremely remote material cooperation with abortion above any other good. An essentially individualistic and libertarian notion of conscience is validated by a selective application of the Catholic tradition while anything the tradition has to say about obligations to other people and the common good is ignored or obscured.

How not to talk about vaccines: Some bishops are choosing the culture war over the common good
Sam Sawyer, S.J.

No one’s conscience can be properly formed or informed by such distortions. And rhetoric advancing those distortions serves only to provide extra ammunition for those who are eager to use vaccine mandates as the latest front in the culture war. Thank God that Pope Francis, the C.D.F. and other Vatican offices, and most bishops have offered a clearer approach.

Let me suggest a rule of thumb for reading future news about this topic: If you can’t find the phrase “common good” anywhere in a discussion of Catholicism and the morality of vaccination, then you are not getting the fullness of the Catholic tradition—and someone may be trying to draft you into the culture war instead.

Listen to Sam Sawyer discuss this article on The Gloria Purvis Podcast: