Covid-19 is not an excuse to keep out refugees. Biden must restore the asylum process. 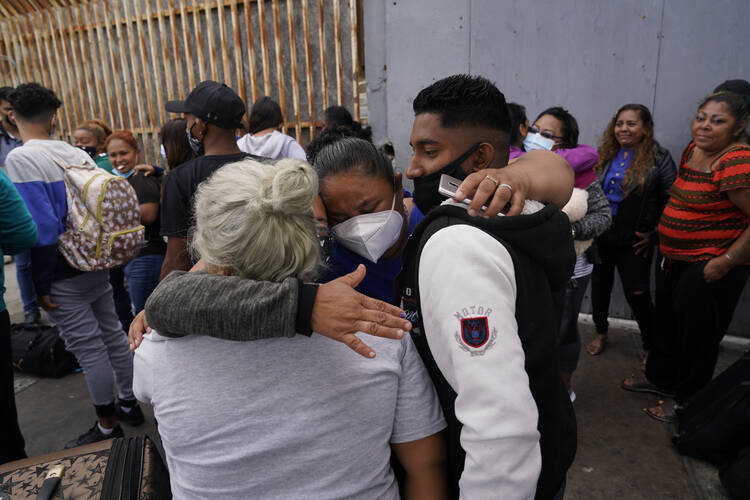 In this July 5, 2021, file photo, Alex Cortillo, from Honduras, gets a hug from Erika Valladares Ponce, also from Honduras, in Tijuana, Mexico, as he waits to cross into the United States to begin the asylum process. (AP Photo/Gregory Bull, File)

I was struck by their sense of anticipation. Sitting on bunk beds in a shelter in Ciudad Juárez, on the other side of the U.S.-Mexico border from El Paso, Tex., they reminded me of my son sitting in a college dorm, hopeful but uncertain about what the future would bring. But the two men—whom I met through Jesuit Refugee Service’s new binational border program, Caminar Contigo—did not have an exciting schedule of classes and activities to look forward to. Theirs was a story of forced displacement, struggle and resolute hope for a better future. Yet the United States continues to refuse to let them make their case for seeking protection in our country.

Since March 2020, the United States has blocked people fleeing violence and persecution from seeking asylum under a public health order called Title 42. This order was put into place as part of a response to the Covid-19 pandemic, but public health experts have been clear that the restrictions are not necessary to protect public health. Other steps such as testing, quarantining and vaccinating can and are being taken to ensure asylum seekers do not spread Covid-19.

Experts have been clear that the Covid-19 restrictions against those seeking asylum are not necessary to protect public health.

A few weeks ago, the Biden administration began allowing exceptions to Title 42 and indicated they would continue to roll back the order this month, re-establishing laws that allow people to request asylum in the United States. However, the administration has since made clear that it will continue to enforce Title 42, undermining our legal and moral obligation to help those, like the men I met in Ciudad Juárez, whose dignity and humanity must be respected as they and their families seek protection in our country. It is essential that the Biden administration restore access to the asylum process for all.

One of the men came to Mexico from Honduras hoping to reunite with his wife and children, who are now in the United States and in the process of seeking asylum themselves. His family left their home two years ago after his sons were harassed by gang members who were trying to force them to join. Determined to be with his family, he tried many different routes through Mexico, at one point traveling on La Bestia, the nickname for the dangerous freight trains that many asylum seekers ride toward the U.S. border. Traveling alone created significant risks, and he feared being targeted for kidnapping and extortion. When I met him at the shelter run by a Claretian priest, he was anxiously awaiting the time when the United States would allow him to request asylum.

As always when I meet people who have been forced to flee their homes, I was struck by his resilience and determination. He wants what we all want: for our families to live safe and decent lives. I thought about what I would have done if gangs had threatened my son, and I knew I would do exactly what this man did—first, ensure the safety of my son by helping him to get to the United States, and then do everything in my power to reunite with him. Why wouldn’t our country be willing to give a man like this the chance to make the case that he deserves to join his family in seeking protection?

As always when I meet people who have been forced to flee their homes, I was struck by his resilience and determination. He wants what we all want: for our families to live safe and decent lives.

The United States has traditionally been a place of refuge for people fleeing violence and persecution. After our experience during World War II, when we turned away a ship carrying Jewish people seeking protection from the Nazis and hundreds of them were then killed when they returned to Europe, we said we would never again be a country that turns away people seeking protection. We signed the international Refugee Convention and created a system for welcoming refugees and asylum seekers. We must stand by that commitment today.

Pope Francis has reminded us that “every stranger who knocks at our door is an opportunity for an encounter with Jesus Christ, who identifies with the welcomed and rejected strangers of every age” (referring to Mt 25:35-43). Our biblical call to welcome the stranger spans the Old Testament and the New Testament. In the parable of the Good Samaritan, we are urged to treat those on the margins of society with respect and love—whether by honoring the Samaritan, an outsider to the Jewish community who was the model of Christ’s call to love our neighbor, or by caring as he did for the stranger in need, who is not an “other” but a brother who should be treated as family.

Catholic social teaching insists that we recognize the inherent dignity of every human being as a child of God. This means, Pope Francis tells us in “Fratelli Tutti,” that “if every human being possesses an inalienable dignity, if all people are my brothers and sisters, and if the world truly belongs to everyone, then it matters little whether my neighbor was born in my country or elsewhere” (No. 125). Our tradition calls us to love our neighbors near and far, especially those in greatest need.

When I think about the men I met in Ciudad Juárez, I see the face of my own son. I think about how I would want him to be treated if his life were at risk and he sought help. There are thousands of others like the men I met, and if we are able to see them as our sons and daughters, our family members, it is clear what we as a country must do: welcome them. 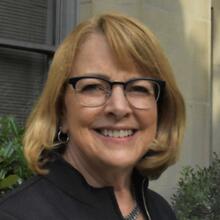 Joan Rosenhauer is the executive director of Jesuit Refugee Service/USA, which advocates for refugees and displaced people in over 50 countries.