‘Fox and Friends’ hosts claimed Catholic Charities profits from helping migrants. That couldn’t be further from the truth. 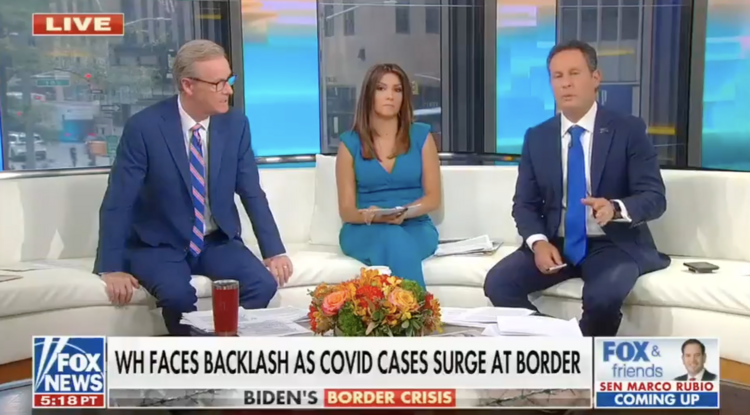 The triumvirate of talking heads on the Fox News channel’s “Fox and Friends” morning show spent a few moments slandering a Catholic Charities USA office on July 28 after two-thirds of the team were apparently shocked to discover that it had been assisting asylum seekers released into its care by the Border Patrol.

A consternated Brian Kilmeade led off: “If you’re a Catholic and giving money to Catholic Charities in America, weren’t you hoping it was going to help Americans, not other people from other countries to come to America illegally? Are you happy about that? Think about that for a second.”

Mr. Kilmeade seemed genuinely surprised when the third Fox host, Steve Doocy, informed him that Catholic Charities has worked on behalf of immigrants “for decades.”

Co-host Rachel Campos-Duffy, first confusing Catholic Charities with Catholic Relief Services before remembering the former as “a whole other racket,” agreed with Mr. Kilmeade that “we need to examine” the “business” of assisting migrants.

Mr. Kilmeade seemed genuinely surprised when the third Fox host, Steve Doocy, informed him that Catholic Charities has worked on behalf of immigrants “for decades.”

“I did not know that,” Mr. Kilmeade said. “They kept that from me.” It is surprising that this bit of history could be kept from a native New Yorker of Irish and Italian extraction, considering that both immigrant communities have cause to be grateful for the various intercessions of Catholic Charities over the years.

The attack on Catholic Charities began after the hosts took a break from ridiculing federal efforts to contain the Delta coronavirus variant, turning to a Twitter-sourced story of an unmasked migrant family, including allegedly Covid-positive members, sitting down to a meal in a La Joya, Tex., restaurant. The family reportedly told local police they were being housed by Catholic Charities at a local hotel but had stepped out to eat. The story dovetailed nicely with the “Fox and Friends” threesome’s conviction that a resurgence of Covid-19 could be blamed not on the hesitancy of many Americans to get vaccinated but on unvaccinated migrants they alleged were pouring across the U.S.-Mexico border.

Federal and state governments often rely on local nonprofit entities, often because of acute and abrupt need, and also because of the nonprofits’ particular areas of expertise.

Mr. Kilmeade deplored Catholic Charities as “ethically challenged,” and Ms. Campos-Duffy said it was driven by the “profit motive” because of its acceptance of government contracts and grants to assist migrants.

In fact, federal and state governments often rely on local nonprofit entities to undertake tasks that would otherwise fall to the government, often because of acute and abrupt need, and also because of the nonprofits’ particular areas of expertise. Catholic Charities has a long history of assisting migrants and refugees, thanks to the U.S. church’s immigrant roots and its institutional acceptance of the Gospel demand to protect the sojourner. (We are also on the hook for orphans and widows and their contemporary equivalents; someone may wish to tell Mr. Kilmeade.) Like many not-for-profit social service entities in the United States, Catholic Charities USA receives significant funding from the federal government through contracts awarded for much-needed social services.

There is no profit to be had in such transactions, if they can be so described. If anything, the social largesse flows in the other direction. Catholic Charities’ many government contracts are augmented by voluntary donations from the nation’s Catholics. In other words, Catholic donors help to reduce what would otherwise be higher costs to the government—not that this would necessarily please Mr. Kilmeade.

The story of the unmasked family in Texas being supported through a Covid quarantine by Catholic Charities could have provided an opportunity for “Fox and Friends” to examine the policies and processes that led up to this moment. It is indeed a concern if the Border Patrol took the easy route of moving possibly Covid-positive migrants into the care of Catholic Charities. In fact, just a few days before the “Fox and Friends” segment, the local Fox network affiliate reported that the Catholic Charities respite center in the Rio Grande Valley region was overcapacity and seeking alternative housing and support for the migrant families being entrusted into its care by the Border Patrol.

Catholic Charities has a long history of assisting migrants and refugees, thanks to the U.S. church’s immigrant roots and its institutional acceptance of the Gospel demand to protect the sojourner.

And the day before “Fox and Friends” badmouthed Catholic Charities, the director of its Rio Grande Valley office, Norma Pimental, M.J., urged a halt to more placements from the Border Patrol while it improved capacity and processes to absorb the newcomers. It turns out that Sister Pimentel was properly concerned about an increase in Covid-19 positivity rates.

Her office was juggling resources to quarantine people who tested positive or were otherwise possible Covid cases. What Catholic Charities of Rio Grande Valley would not do was turn them out onto the streets.

In a statement released on July 29, Sister Pimentel described the restaurant confrontation as an “isolated incident in a new location we had just begun to use.”

“Throughout the pandemic we have taken extra precautions so that our local community is safe,” she said, explaining that the Rio Grande Valley office “in collaboration with city and county officials,” established its own Covid-19 testing facility.

“Our effort has been to test every person released in the community. Thankfully, we have seen a low percentage of immigrants testing Covid positive,” she said.

Families with members who test positive are quarantined at local hotels, and “we provide the care the family needs so that they do not have to leave their room” until negative tests are returned.

Bishops hold emergency meeting on immigration: ‘We have the duty to take care of one another.’
Rhina Guidos - Catholic News Service

Those details might have resolved the “Fox and Friends” hosts’ confusion about Catholic Charities intentions. Maybe they would have been inspired instead to use the restaurant anecdote to talk about a glaring contradiction raised by what they might call another “racket,” Catholic Relief Services.

For months C.R.S. has joined global health and humanitarian agencies imploring vaccine equity—that is, a more ethical and strategic distribution of the world’s Covid-19 vaccine reserves, arguing that no one will be safe from the coronavirus and its mutations until we are all safe. Instead, rich countries have largely persisted in a policy of hoarding global vaccine output while refusing to liberate vaccine production from intellectual property restrictions. You know, to protect the profit motive.

Now there’s an ethical challenge worth exploring on tomorrow’s “Fox and Friends.”