Immigration advocates were thrilled when Biden was elected. Then deportations started speeding up again. 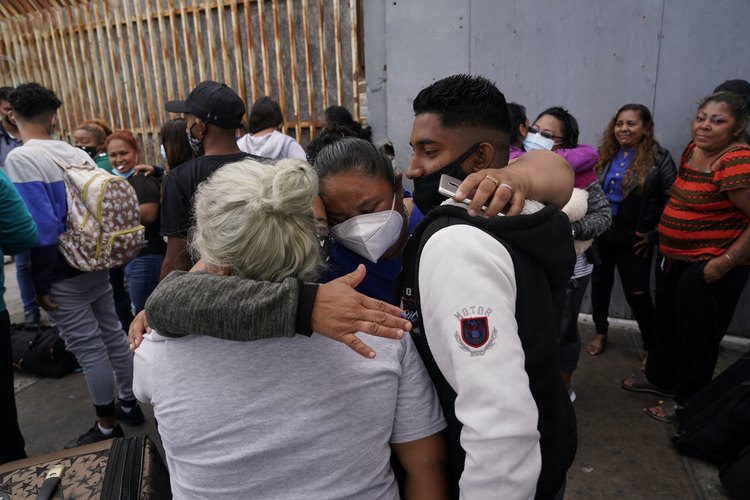 In this July 5, 2021, file photo, Alex Cortillo, right, of Honduras gets a hug from Erika Valladares Ponce, of Honduras, center, and others, as he waits to cross into the United States to begin the asylum process in Tijuana, Mexico. (AP Photo/Gregory Bull, File)

Such was the feeling of goodwill that during the first few months of his presidency, thousands flocked toward the U.S.-Mexico border, confident they would be let in.

Then he sent Vice President Kamala Harris on a short jaunt to Central America, where she delivered an unequivocal message June 7 in Guatemala for “folks in this region,” meaning El Salvador, Guatemala and Honduras: “do not come.”

Harris warned them: “If you come to our border, you will be turned back.”

Yet many still are convinced the Biden administration is their best shot at getting a chance to stay or enter into the U.S., even as his administration seems increasingly moving toward a policy of deterrence -- at least when it comes to Central America.

Groups that advocate for migrants have noticed.

During a televised CNN town hall July 21, Biden was asked to explain the vice president’s comments in Guatemala given that he and administration officials had said they favored refugees coming into the U.S.

“Could you please explain your administration’s basic stance on immigration?” a participant asked.

Biden said he had been referring to refugees from places such as Afghanistan, specifically those who helped soldiers there during U.S. involvement in the country. But those from the Central America region referred to as the Northern Triangle fell under a different category.

“They should not come,” Biden said, elaborating on a different plan for Central America, one that encouraged applying for asylum at home, not at the U.S.-Mexico border.

“We’ve significantly increased the number of officers who can hear cases as to whether or not you qualify under the law for being here as a refugee ... that’s what we’ve done,” Biden added.

In the latest move toward deterrence, the administration announced a return to a policy of fast-tracking deportations.

On July 26, the U.S. Department of Homeland Security announced it would clear the path to begin using, once again, “expedited removal” proceedings, rapid deportations of some immigrant families who entered the U.S. illegally and do not qualify for asylum.

It was tool put in place under the Clinton administration in 1996 and has been used by several U.S. presidents from both sides of the political aisle.

“One of the major problems with expedited removal is that the immigration officer making the decision virtually has unchecked authority,” said the American Immigration Council in a primer on the procedure posted to its website July 22.

“When an immigration official encounters someone they believe may be subject to expedited removal, the burden of proof is on the individual to prove otherwise,” the council said.

“This means,” it added, “that an individual believed to be subject to expedited removal will have the burden of proving to an immigration official that they have been physically present in the United States for two or more years or that they were legally admitted or paroled into the United States.”

The immigration officer becomes the prosecutor and the judge, the organization said.

But DHS said the policy is “a lawful, more accelerated procedure to remove those family units who do not have a basis under U.S. law to be in the United States.”

The process would apply to families who can’t be turned away under a section of the Public Health Safety Act the Trump administration invoked that is known as Title 42, the statement said.

Title 42 turns away certain immigrants at the border, citing public health measures to contain the coronavirus. It was activated by the Trump administration in March 2020 as COVID-19 infections began to surge in the U.S. -- and around the world. Biden has kept it in place.

By not dropping Title 42 and reinstating expedited removals, immigrant advocates have started voicing disappointment with the direction the administration seems to be going.

In a July 29 telephone conference call sponsored by the Welcome with Dignity campaign, a coalition of pro-immigrant groups, Eleanor Acer, senior director of Refugee Protection for Human Rights First, said the organization was “deeply disappointed” that an administration that had professed human rights was failing to uphold them.

“Expedited removal should not be used. The stakes of getting it wrong are too high.”

During the same call, Gracie Willis, staff attorney for the Southern Poverty Law Center, and Nicole Phillips, legal director for the Haitian Bridge Alliance also expressed worries with the direction the administration was heading, particularly with expedited removals and other encounters involving immigration agents and migrants.

Racism still plays a part, they said, in deciding who is believed when they present “credible fear” claims, a criteria used when deciding whether the person’s case for asylum or other immigration protection can go forward or be denied.

“Expedited removal should not be used,” said Willis. “The stakes of getting it wrong are too high.”

On July 27, the administration issued a “blueprint” for its next steps involving immigration policy.

While it touted its work reuniting parents and children separated under the Trump administration’s immigration policies, it also emphasized efforts to halt newcomers and the work of smugglers who try to get migrants through the border.

The American Immigration Council said that “from January to May 2021, driven by seasonal migration patterns on top of the numbers from the previous year, single adult apprehensions rose from 62,560 to 117,397.”

The council also said 65.4% of all people encountered by the Border Patrol at the border were expelled under Title 42. The council said exceptions are children and some families.

Much of this involves people applying to come to the U.S. while they are still in their home countries, not at the border; reducing visa backlogs; and expanding temporary work visas for agricultural workers from the region to come to the U.S.

But following the late July announcement on the expedited removals as well as not doing away with Title 42, some pro-immigrant organizations have begun publicly voicing disappointment as well as what they say is “betrayal” from the administration.

“The Biden-Harris administration committed to restoring asylum protections and protecting people seeking safe-haven, as well as immigrant communities. However, the decision to favor expedited removals constitutes a betrayal of that promise,” said Oscar Chacon, executive director of Alianza Americas in a July 28 news release.

“It is obvious that the Biden-Harris administration remains trapped by those who continue to see migration as a negative factor to the well-being of the United States of America, when the opposite is true”

“It is obvious that the Biden-Harris administration remains trapped by those who continue to see migration as a negative factor to the well-being of the United States of America, when the opposite is true,” he said.

“It is truly shameful to see the richest nation on earth treating families and children running for their lives be sent back to the very conditions that made them flee, especially in the context of the global pandemic,” Chacon added.