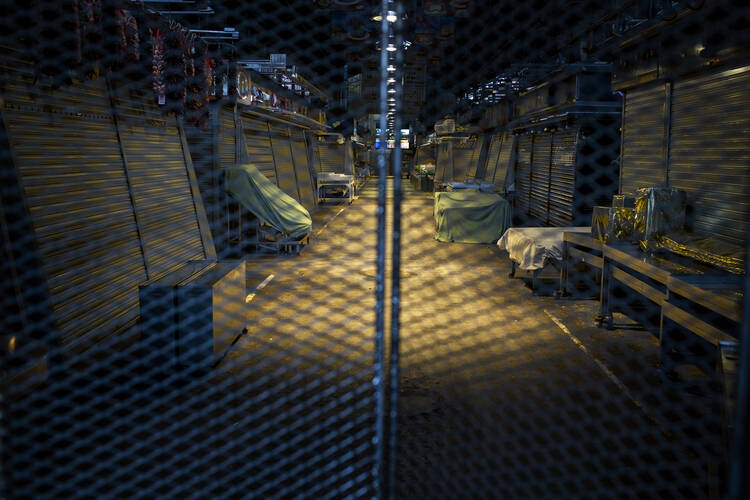 Pope Francis has warned of the risk of a “viral genocide” in places where governments put the economy before people during the coronavirus pandemic.

He issued this warning in a handwritten letter on March 28 to Judge Roberto Andrés Gallardo, the Argentinean-born president of the Pan-American Committee of Men and Women Judges for Social Rights. America has received the original letter, which was reported in the Argentine daily, La Nación, by Elisabetta Piqué, with the judge’s permission. (Full disclosure: Ms. Piqué is the wife of America’s Vatican correspondent.) Francis has met with Mr. Gallardo several times, including at the summit of judges at the Pontifical Academy of Social Sciences in June 2019. The committee was born from this and earlier meetings.

Responding to a letter from the judge on March 26, Francis wrote, “We are all concerned at the increase, in geometric progression, of the pandemic.” He said he was “edified by the reaction of so many persons, doctors, nurses, volunteers, religious [women and men], priests, who risk their lives to heal and defend healthy people from the contagion.”

“The governments that face the crisis in this way show the priority of their decisions: the people first.... It would be sad if they opted for the opposite, which would lead to the death of very many people.”

He noted that “some governments have taken exemplary measures, with priorities that are well targeted at defending the population” but acknowledged that such measures “annoy those who find themselves obliged to comply.” He insisted, however, that these measures “are always for the common good and, by and large, the majority of the people accept them and respond with a positive attitude.”

In the letter, Francis stated, “The governments that face the crisis in this way show the priority of their decisions: the people first.” He emphasized that “this is important because we know that to defend the people supposes an economic setback.” But, he said, “it would be sad if they opted for the opposite, which would lead to the death of very many people, something like a viral genocide (genocidio virosico).”

He told the judge that he had held a meeting with the Vatican Dicastery for Integral Human Development on March 27 on “the present situation and on what comes after” and that “it is important to prepare ourselves for what follows.” He noted that “there are already some consequences that must be faced: hunger, above all for persons without a permanent job (odd jobs, etc.), violence, the appearance of usurers (who are the true plague of a social future, dehumanized delinquents).”

Referring to “the economic future,” Pope Francis told the judge that he considered “the vision” of the economist Mariana Mazzucato, “interesting.” Ms. Mazzucato, an economist with dual Italian-U.S. citizenship who teaches at the University College London, is a critic of the current global financial system, which, she argues, encourages the extraction of value instead of its creation. He mentioned her 2018 book, The Value of Everything: Making and Taking in the Global Economy, which calls for a stronger role for the public sector in the economy, and said, “I believe [her vision] can help to think about the future.”