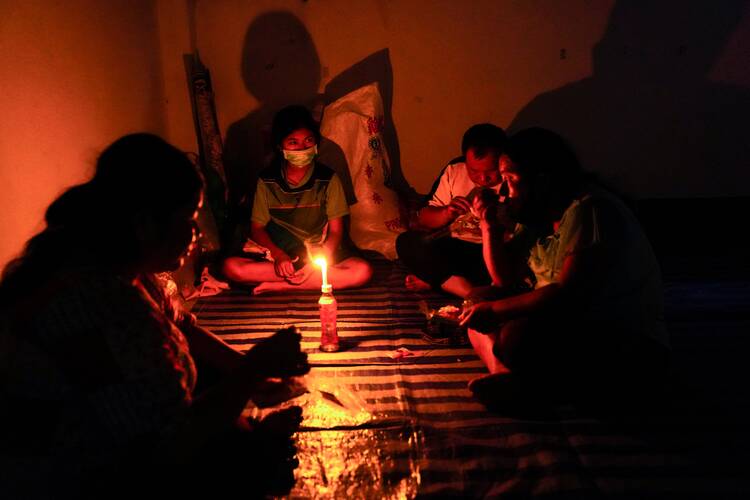 Villagers fleeing the violence in Myanmar are pictured under candlelight at a school in the Thai border village of Mae Sam Laep. Cardinal Charles Bo is asking the people of Myanmar to say the rosary and participate in eucharistic adoration for peace and justice. (CNS photo/Athit Perawongmetha, Reuters)

Cardinal Charles Maung Bo today denounced the attack by Myanmar’s army on innocent civilians—mostly women and children—who had taken refuge in a Catholic church in the village of Kayan Tharyar, four miles from Loikaw, capital of Kayah State, on Sunday May 23. The attack killed four people, injured at least 8 and displaced many people, according to Cardinal Bo.

“It is with immense sorrow and pain, we record our anguish at the attack on innocent civilians, who sought refuge in Sacred Heart Church,” the cardinal said in a statement.

Cardinal Bo said “the midnight attack made the hapless people flee to the jungle. Their fate is still not known to the outside world.”

He said, “The violent acts, including continuous shelling, using heavy weaponry on a frightened group of largely women and children, resulted in tragic death of four people and wounding more than eight.”

Cardinal Bo said, “The midnight attack made the hapless people flee to the jungle. Their fate is still not known to the outside world. Food, medicine and hygiene are urgent needs but there is no way of reaching them. There are many children and old people among them, forced to starve and without any medical aid. This is a great humanitarian tragedy.”

The Vatican’s Fides news agency, based on information from Myanmar Jesuits, reported earlier that “soldiers attacked the village of Kayan Tharyar...with artillery shells last night, with the aim of hitting suspected rebel groups.” It said, “The villagers...believed that the parish church would be a place where they could safely take refuge for those fleeing accidents and shootings in the area, but tragically this was not the case.”

Cardinal Bo said, “The church suffered extensive damage, bearing witness to the intensity of attack on a place of worship.” He drew the attention of the Myanmar authorities to the fact that “the places of worship as a cultural property of a community, is covered by International Protocols. Churches, hospitals and schools are protected during conflict through the Hague Conventions.”

“Apart from all Protocols,” the cardinal said, “let us remember the blood that is spilled is not some enemy’s blood; those who died and those who were wounded are the citizens of this country. They were not armed; they were inside the church to protect their families. Every heart in this country weeps for the death of innocent people.”

The conflict has erupted in Kayah state in the eastern part of Myanmar as a result of the military coup d’état on Feb. 1. The state has a population of 355,000, three quarters of whom belong to ethnic groups; it is the Burmese state with the highest percentage of Christians, including 90,000 Catholics.

Cardinal Bo said, “Hundreds die; thousands become refugees and displaced. More than 20,000 have been displaced in the recent conflict in Loikaw.”

Cardinal Bo, who is president of the Myanmar Catholic bishops conference and president of the Federation of Asian Bishops’ Conferences, concluded his statement with an appeal for peace to the military, in the first place, but also to opposition who are taking up arms too in the face of the military. He appealed to them not to escalate the war.

“This needs to stop,” the cardinal said. “We plead with you all, related organizations, kindly do not escalate the war. Our people are poor, Covid-19 robbed them of their livelihood, starvation stalks millions, the threat of another round of Covid-19 is real. Conflict is a cruel anomaly at this moment. Peace is possible; peace is the only way.”

His appeal is timely given the news coming from Myanmar. The Vatican Fides news agency reports that “the level of confrontation is increasing in Myanmar, where, as of May 23, at least 818 people have died since the military coup on Feb. 1, which was followed by widespread popular protest.” It said, “The rebellion against the junta continues to ignite the center and the periphery: the protests continue to hit the cities, 30 of which are under curfew from 8 p.m. to 4 a.m. in the morning, while in Yangon and Mandalay, epicenters of the rebellion, the curfew begins two hours before. Even rural areas are not exempt from military violence, detentions and raids.”

Fides and other news agencies reported that the military junta’s election committee has declared that it will dissolve the National League for Democracy—Aung San Suu Kyi’s party—for electoral fraud.

Other news agencies reported that Aung San Suu Kyi was seen for the first time Monday when she was brought to court for the trial in which she is accused of several crimes. She has been under house arrest since the coup.