As the Covid-19 crisis continues, Brazil’s elderly rely on the church’s pastoral outreach 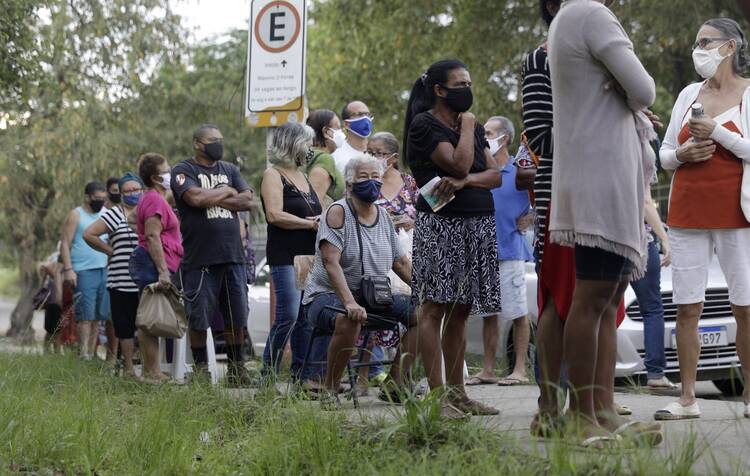 People wait outside a vaccination station to receive a dose of the Sinovac CoronaVac COVID-19 vaccine in Belford Roxo, Brazil, March 31, 2021, during a vaccination day for citizens 71 and older. (CNS photo/Ricardo Moraes, Reuters)

When the Covid-19 pandemic started, Leila, a pastoral agent in Brazil, was prevented from visiting the senior citizens she used to see on a monthly basis. But one day, an elderly woman called her and said she had an urgent question. Leila went to her home and met the woman and her husband just outside their house gate.

She discreetly passed Leila a folded note, pretending to share a cake recipe. Arriving home, Leila read: “If Covid comes for me, all of my papers are in the closet, first door on the left. I want to be buried in the cemetery. Please have them use the picture that is on my dining-room table.”

(Editor’s note: Pseudonyms have been used for the names of the pastoral agents quoted in this article to protect their relationships with the seniors they serve.)

That is the level of trust that agents of Pastoral da Pessoa Idosa (“Pastoral Care for Elderly Persons”) achieve with the 170,000 people they accompany all over Brazil. The ministry is a national effort of the Catholic Church, under the social action sector of the National Conference of Brazilian Bishops.

“We visit the most vulnerable, the weakened, those who have health problems caused by aging, those who are abandoned, lonely or depressed.”

The note left Leila a little shocked. “I have been visiting the elderly for years, but never thought that someone would write that,” she told America. She asked for guidance from her regional coordinator, Lúcia Secoti, from the pastoral office in the Archdiocese of Campinas, in the Brazilian state of São Paulo.

“Then I called the lady and told her I would keep the ‘recipe’ safely until the right moment,” Leila said. “This is how the elderly are feeling here: anxious, afraid, worried. Vaccines are slowly bringing them some hope.”

The church’s service ministry to Brazil’s elderly was founded in 2004 by Zilda Arns, a pediatrician and humanitarian. A sister of the late Cardinal Paulo Evaristo Arns (1921-2016), Dr. Arns was famous for founding Pastoral da Criança (“Pastoral Care for Children”) in 1983, a ministry that has saved the lives of millions of Brazilian children facing malnutrition. (Dr. Arns was killed during a service visit to Haiti, a victim of the January 2010 earthquake. The cause for her canonization was opened in Port-au-Prince in 2015 and was eventually transferred to the Archdiocese of Curitiba, Brazil.)

While visiting children to check on their health and to counsel families on basic nutrition—accompaniment that Brazil’s state governments did not provide—agents of Pastoral Care for Children realized that Brazil’s elderly experienced a similar vulnerability. Thus, Pastoral Care for Elderly Persons was created. It has since been expanded into all Brazilian states.

“One ministry focuses on children and the other on the elderly,” said Sister Maria Lúcia Rodrigues, the national coordinator for Pastoral Care for Elderly Persons. “Those are two ends of human life and both come with crucial demands.”

According to Sister Rodrigues, all of the efforts and interventions of the ministry’s workers are built around their monthly home visits. “We visit the most vulnerable, the weakened, those who have health problems caused by aging, those who are abandoned, lonely or depressed,” she said.

The Pastoral da Pessoa Idosa (“Pastoral Care for Elderly Persons”) reaches 170,000 seniors all over Brazil. The efforts and interventions of the ministry’s workers are built around monthly home visits.

The commission recruits and trains regional coordinators, who accompany the work of local leaders. Each of the 25,000 ministry leaders regularly checks on a certain number of families, generally close to their own neighborhood, which makes the outreach especially efficient. Most of its agents are women.

Another pastoral agent, Veronica, told America that one of the elderly people she accompanies lost a son six months ago, has a husband who cannot walk and needs to have surgery to remove a tumor. “They are raising money online to hire a caregiver so she can have the surgery,” she said.

And this is just one example. Sister Rodrigues said that the ministry cannot solve all the problems of the people it reaches, but it does build bridges between the elderly and the community around them. When someone is in trouble, the pastoral agents help locate the right assistance.

“We do not take the problems as our own. We encourage the elderly to be active, seek their rights and get in touch with the competent bodies,” she said. “Otherwise we respect their autonomy.” In cases where elders are less independent, pastoral agents keep close contact with family and friends. Brazil has had a specific law enumerating the rights of the elderly since 2003. All people over 60 fall under this category.

Brazil is a predominantly young country, but it is aging. In 1950, the elderly represented only 2.6 million people. By 2019, there were more than 30 million elderly people in Brazil—13 percent of the population.

Brazil is a predominantly young country, but it is aging. In 1950, the elderly represented only 2.6 million people. By 2019, there were more than 30 million elderly people in Brazil—13 percent of the population. As it has been around the world, Covid-19 has been hardest on the elderly in Brazil. Henrique Salmazo, a gerontologist and professor at the Catholic University of Brasília, reports that seven out of 10 deaths caused by Covid-19 in Brazil have been among older adults.

“There has been a huge impact on the lifestyle of these people,” he said. Under Covid-19 restrictions, elderly people in Brazil now have fewer social interactions; they have been forced to change eating habits and do less physical activity, and they have experienced less leisure time and social support, Dr. Salmazo said.

Pastoral Care for Elderly Persons found itself in a challenging situation under Covid-19—the in-person visits were the heart of the program. In March 2020, with the enforcement of social distancing protocols, however, pastoral workers started a campaign to “Call an elderly person.” Instead of visiting seniors, agents now keep in touch by phone or video calls, and they encourage other Catholics to do the same.

Dr. Salmazo also mentioned ageism, or discrimination against older people, as a social disease aggravated by the pandemic. “There is great psychological overload [on seniors],” he said, adding that many were also greatly burdened with anxiety over their family members as the pandemic continues.

The fact that volunteers now contact them by phone and video calls help minimize that overload, he believes. “We have to make use of technology in the best way possible, and more older people are learning how to use it.”

The pandemic has encouraged many families to be extra careful with their older family members, many “felt called to value that precious and fragile life and show greater respect for the elderly.”

Talita Orlandi, a geriatrician who works in São José dos Campos, also sees prejudice against the elderly as a growing problem in Brazil. “In the pandemic it was at first seen as a ‘relief’ that the elderly were the most affected, a kind of liberation for the younger ones,” she said. On a positive note, she said, the crisis has encouraged many families to be extra careful with their older family members, noting that many “felt called...to value that precious and fragile life and show greater respect for the elderly in general.”

She has observed more cases of depression among her patients—although loneliness is more common among the wealthier, who generally have smaller families, she said. Many complain of “persistent discouragement and hopelessness.”

That is in line with pastoral agents’ experiences. Ms. Secoti said that “the great concern of the elderly today is finitude, death.” Before vaccination, this tension was severe. Today, most Brazilians over 70 have been vaccinated. Most local governments are currently vaccinating those in their 60s.

“We have helped them by clarifying about the vaccination process, the differences between the vaccines, like the flu and the Covid shots,” Ms. Secoti said. In her region, the pastoral ministry established a partnership with the Pontifical Catholic University of Campinas, creating a “psychological help desk.” Now the elderly can call mental health experts for free.

Dr. Salmazo considers the work of the pastoral to be essential in the current crisis in Brazil. “They build a network of solidarity that provides not only direct support, but also emotional, affective [support]. This work should be encouraged and extended by that of other government and civil society entities,” he said.

Seniors need to feel “part of a whole,” said Dr. Orlandi. “I believe that faith communities and churches play a role in nurturing the elderly with resilience and hope for better days.”