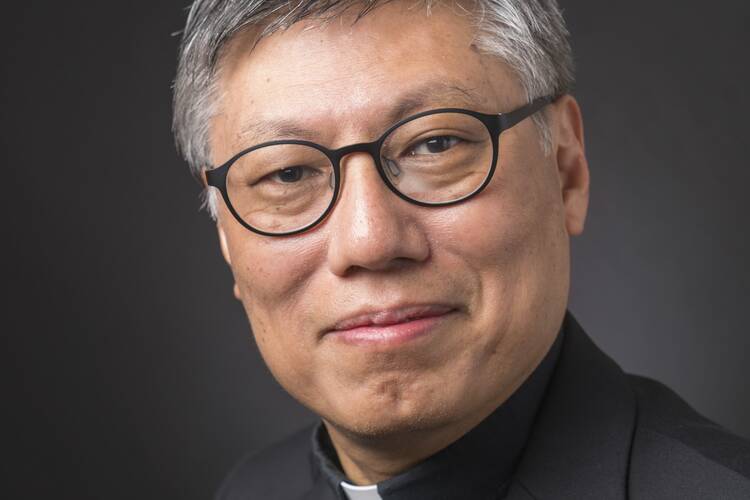 Jesuit Father Stephen Chow, provincial of the Jesuits' Chinese province, was named bishop of Hong Kong by Pope Francis May 17, 2021. The 61-year-old bishop-designate was born in Hong Kong. He is pictured in a 2016 photo. (CNS photo/Don Doll, S.J., courtesy General Curia of the Society of Jesus)

HONG KONG (CNS) -- Bishop-designate Stephen Chow Sau-yan told Hong Kong media people must start with a sense of faith and not assume Beijing is the enemy, and he hoped for dialogue to develop a better understanding.

“It is not that I am afraid to talk about controversial or political issues. Rather, we believe prudence is a virtue,” he said.

“Religious freedom is our basic right,” he added. “We want to really talk to the government not to forget that. It is important to allow religious freedom, matters of faith -- not just Catholic, but any religion should be free.”

People must start with a sense of faith and not assume Beijing is the enemy.

The Hong Kong Diocese introduced the bishop-designate at a news conference May 18, the day after Pope Francis named him a bishop. Bishop-designate Chow, 61, is provincial of the Chinese province of the Society of Jesus. To allow for the Jesuits to appoint a new provincial superior, his episcopal consecration will be Dec. 4, reported Sunday Examiner, newspaper of the Diocese of Hong Kong.

The Catholic Social Communications Office announced that Cardinal John Cardinal Tong Hon, apostolic administrator of Hong Kong, will continue in office until Bishop-designate Chow takes canonical possession of the diocese after his installation.

At the news conference, Father Chow answered an array of questions regarding his vision for the diocese, its relationship and integration with Hong Kong society and its relationship with the church in China.

Responding to a question about how he would bring about unity in the church community, which has been highly polarized in the recent past, he said since he was just appointed, he has no big plans.

“But I do believe that there is a God who wants us to be united. Unity is not the same as uniformity. I always mentioned in my schools, we must respect unity in plurality. It is something that we must learn to respect -- plurality,” he said.

“I do believe that there is a God who wants us to be united. Unity is not the same as uniformity,” Bishop-designate Stephen Chow Sau-yan said.

Since 2006, Bishop-designate Chow has been supervisor of the Wah Yan colleges, two prestigious Jesuit educational institutions in Hong Kong. He described his role of supervisor as that of being a “bridge.”

When the Sunday Examiner quizzed him on his role of being a bridge in the larger perspective of the diocese, Father Chow said: “Two years ago, Hong Kong and even my school community was much divided. The question was how to bring healing. It takes a long process -- and I am not saying I was successful, but I am doing my best. Listening with empathy is very important, and this is the fundamental point.”

Responding to a question from the Sunday Examiner on what his fears or concerns might be and the difficulty that he had in accepting the appointment, he said he believed “the bishop of the diocese should better come from among the diocesan priests.”

However, he said, “I have discussed and discerned with my father general in Rome. At the end, as a Jesuit, I owe my obedience to the Holy Father.”

Bishop-designate Chow recounted, “The Holy Father wrote something -- in his handwriting -- that he ‘agrees that I should be the bishop.’ I read the letter -- in Italian, I don’t know Italian -- but it was translated for me. For me, that was a sign that I should take it up. And Hong Kong is a place I really love, my birthplace and the place where I grew up.”

Responding to a question about accompanying young people in the future, especially on occasions like observing the June 4 anniversary of the Tiananmen Square massacre, Bishop-designate Chow said: “There are different ways of commemoration. Sometimes in the past I had joined the event in the public arena, but there were times I could not go. So I pray, I pray for China, pray for all those who have passed away in 1989. Whether it is possible this year depends on the legal requirements.”

Pope Francis spoke out against oppression in Myanmar. Why is he silent on China and Hong Kong?
Gerard O’Connell

A journalist asked Father Chow what advice he would give Carrie Lam, chief executive of Hong Kong, who is also a Catholic. She has been criticized for losing touch with the people and refusing to listen to their views. He responded that he has not yet met the chief executive and it is not proper for him to advise her through a news conference.

Lam and other officials in Hong Kong have faced increasing pressure since China implemented a new security law that bans subversive and secessionist actions in the former British colony. Last July, Zheng Yanxiong, a senior Chinese politician who crushed a mainland democracy movement, was appointed to oversee its implementation.

When Britain handed back Hong Kong to China in 1997, certain democratic rights were guaranteed for at least 50 years under the “one country, two systems” agreement. However, the imposition of the security law practically brings Hong Kong under full Chinese administration and indirectly ends the agreement that allowed Hong Kong’s semi-autonomous status.