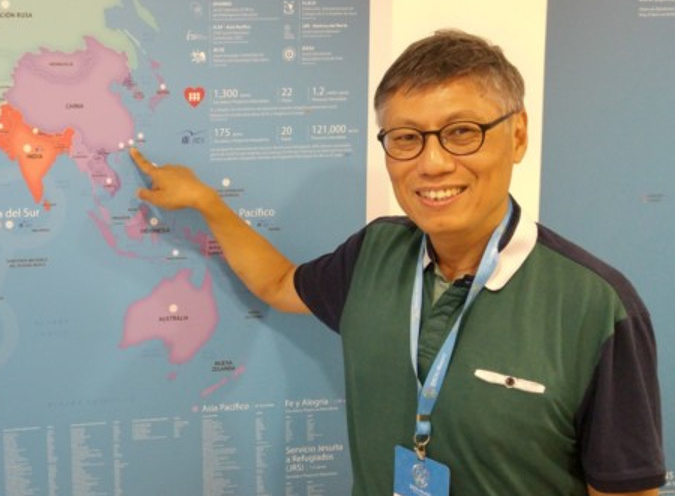 Stephen Chow, S.J. (photo courtesy the Chinese Province of the Society of Jesus)

In a surprise move, after a search that lasted more than two years, Pope Francis has named the Jesuit Stephen Chow Sau-yan, 61, the provincial of the Chinese province of the Jesuits, as the ninth Catholic bishop of Hong Kong.

The Vatican announced this at noon today, Rome time, May 17. The diocese has been without a bishop since Jan. 3, 2019, when Bishop Michael Yeung Ming-cheung died after leading the diocese for just 17 months. Cardinal John Tong Hon, 80, who had succeed Cardinal Joseph Zen Ze-kuin and was bishop of Hong Kong prior to Bishop Yeung, has served as apostolic administrator of the diocese since then, including a turbulent political period that saw Hong Kong lose the democratic freedoms it had enjoyed since the handover from Britain to the People’s Republic of China in 1997, as Beijing imposed a national security law in June 2020.

The diocese has been without a bishop since 2019, when Bishop Michael Yeung Ming-cheung died after leading the diocese for just 17 months.

Many have wondered whether the delay in appointing a new bishop was linked to the Vatican having difficulty with Beijing. But a senior Vatican official, responding to a question from America, denied this. He confirmed that the Holy See had not consulted Beijing on the nomination of the bishop for Hong Kong. He explained that notwithstanding the fact that the Holy See has a “one China policy” it does not consult Beijing on the nomination of bishops for Macau, Hong Kong or Taiwan, nor does it need to as these three ecclesiastical jurisdictions are not part of the provisional agreement that the Vatican signed with Beijing in Sept. 2018 and renewed in October 2020.

Bishop-elect Chow’s appointment will come as a surprise to many. Over the past two years there has been considerable discussion in the Vatican and elsewhere regarding who could be the best choice. Several names were mentioned but his was not initially among them, one source told America. Indeed, on at least one occasion, it seemed as if the Vatican had decided on a candidate, but then no bishop was named to the disappointment of many Catholics in Hong Kong.

The Vatican has taken time to find the man it considers best suited for this challenging and difficult post. The appointment comes on the heels of the most serious political crisis in Hong Kong since the handover on July 1, 1997, in which the church became involved as many Catholics, including some prominent ones—such as Martin Lee, the father of the democratic movement, and Jimmy Lai the media magnate—were involved peacefully in the democratic movement and arrested. Several have been condemned in the courts and are serving prison sentences.

It seems the Vatican was looking for a candidate who has not been openly identified with the democratic protests of recent years.

It seems the Vatican was looking for a candidate who has not been openly identified with the democratic protests of recent years in Hong Kong, and so would not be seen as a political challenge to Beijing. Nor was it looking for someone too closely aligned to Beijing. Sources say it was certainly looking for a strong spiritual leader, who knows the situation well, a man committed to dialogue, who could give good leadership to the church in Hong Kong and promote reconciliation in these difficult times and in the coming years. It believes it has found one in the Jesuit provincial for the Chinese province.

Hong Kong, a metropolitan area and special administrative region of China, is about 110 times smaller than New York but is one of the most densely populated places in the world. It has a population of 7. 5 million people. Bishop-elect Chow will lead a diocese of 626,000 Catholics served by 71 diocesan priests and 214 other resident priests who are members of religious orders, who minister in 52 parishes and 100 churches or mass stations, and 253 educational institutes (schools etc). There are also 336 members of men’s religious institutes and 441 members of women’s religious institutes. (Statistics: Annuario Pontificio, 2021). The diocese has an auxiliary bishop: Monsignor Joseph Ha Chi-shing, O.F.M.

Bishop-elect Chow was born in Hong Kong on August 7, 1959, and like all his predecessors since 1969, he is Chinese. He gained a master’s degree in education and psychology in 1984 from the University of Minnesota. He joined the Society of Jesus in September of that same year, at the age of 25, and did his novitiate in Dublin, Ireland. After gaining a licentiate in philosophy in Dublin, he took his first vows on September 27, 1986.

In 2017, Father Sosa appointed Fr. Chow as provincial of the China province of the Jesuits. That province includes Taiwan, Hong Kong, Macau, and mainland China.

On his return home, he taught at the Jesuit-run Wan Yan college in Kowloon from 1988 to 1990, and then studied theology at the Holy Spirit seminary in Hong Kong from 1990 to 1993. He was ordained priest by Cardinal John Baptist Wu in the cathedral of the Immaculate Conception, Hong Kong, on July 16, 1994. The following year he went to Loyola University Chicago to study organizational development and gained a master’s degree.

From 1996 to 2000 he taught, did chaplaincy work, and was school manager at Wah Yan College, Kowloon. After gaining a doctorate in human psychology and development from Harvard University in 2006, he took his final vows as a Jesuit the following year. He then went on to serve as supervisor of the Jesuit Wah Yan colleges in Hong Kong and Kowloon from 2006 to 2021.

Father Chow participated in the 36th General Congregation of the Society of Jesus at which Father Arturo Sosa was elected Superior General of the Jesuits on Oct. 14, 2016.

In 2017, Father Sosa appointed Fr. Chow as provincial of the China province of the Jesuits. That province includes Taiwan, Hong Kong, Macau, and mainland China. There are 168 Jesuits working in the province, 42 of whom are currently living outside the province for reasons of studies or other purposes. However, 28 of the 168 are Jesuits who belong officially to other provinces but work in the China province today. There are 18 Jesuit priests and one scholastic in Hong Kong today, and all except 5 are Chinese. He will cease to be provincial once he is ordained bishop of Hong Kong on Dec. 4, and probably even before that. The process to find his successor as provincial will start immediately.

Commenting on his appointment as bishop of Hong Kong, Father Arturo Sosa said in a statement: “I am happy that Fr. Stephen can continue to serve, and I wish him every blessing in this new ministry. The Jesuits are proud of our links with the Chinese people, which go back to the great missionary Matteo Ricci who had such a respect for Chinese culture.”