Pope Francis spoke out against oppression in Myanmar. Why is he silent on China and Hong Kong? 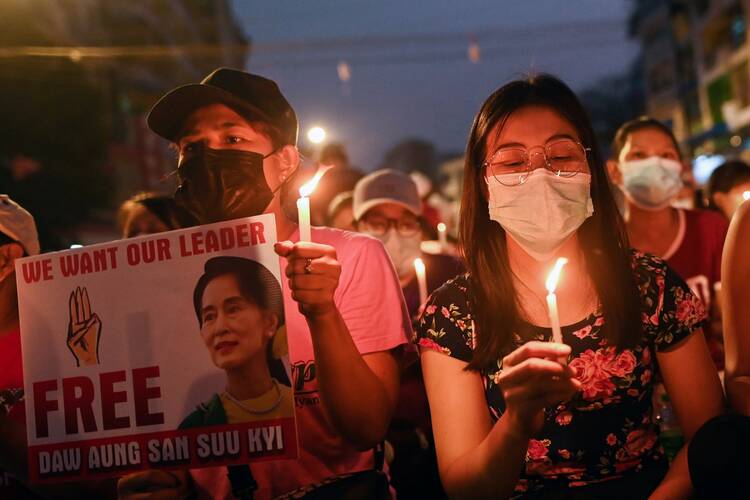 People hold candles as they take part in an anti-coup night protest at Hledan junction in Yangon, Myanmar, March 14, 2021. Pope Francis on March 17 appealed for an end to violence and the start of dialogue in Myanmar, where security forces have killed at least 138 people. (CNS photo/Reuters)

This is the second installment of a three-part series of interviews with Archbishop Paul R. Gallagher, the Vatican’s Secretary for Relations with States. You can read Part 1 here.

On Feb. 14, 2020, Archbishop Paul R. Gallagher met his Chinese counterpart, China’s foreign minister, Wang Yi, in what was the highest-level meeting between the two sides since the Communists came to power in China on Oct. 1, 1949. America asked in an interview if he has perceived a warming of relations between China and the Holy See in recent years, particularly since the signing of the provisional agreement in September 2018.

“I think what we feel is that there is greater understanding and more openness to talking about the issues,” the archbishop said. “Obviously, China is an immense country and has a huge population and a corresponding governmental structure, so we—the Holy See—actually negotiate with a very, very small group of people from that structure. So it is quite difficult to understand what the impact is of what they take back to Beijing or what we bring to Beijing.”

Since it seems that Chinese officials tend to follow a certain protocol in arranging meetings at different levels in the hierarchical structure, I asked Archbishop Gallagher if there are any plans for him or Cardinal Pietro Parolin, the secretary of state, to go to Beijing, or for Chinese government officials at the same diplomatic level to come to Rome.

There has been criticism of the Vatican for not speaking out against China’s restrictions on religious freedom and its repression of the Uighurs in Xinjiang Province as well as the democracy movement in Hong Kong.

As the archbishop knows, there has been criticism of the Vatican for not speaking out against China’s restrictions on religious freedom and its repression of the Uighurs in Xinjiang Province as well as the democracy movement in Hong Kong. While Pope Francis mentioned the persecution of the Uighurs once in his book Let Us Dream, published Dec. 1, 2020, the Vatican has remained silent on the situation of this majority-Muslim ethnic minority and on the repression in Hong Kong.

“I think you will find it true that the Holy See does not have a policy, a diplomatic policy, of denunciation almost anywhere in the world,” Archbishop Gallagher responded, “and there are human rights abuses in many, many countries.”

He went on to explain the Holy See’s stance. He said:

We believe in trying to work with the Chinese. Our objective in the [provisional] agreement [of September 2018] is to resolve the difficulties we have in the appointment of bishops, and that is all it is about. We do, in our bilateral contacts with them, consistently try to argue for normalization of relations between the Catholic Church and the Chinese authorities, but we realize that this is a very long-term objective. But the question of the nomination of bishops has been and remains a big priority.

The Church in Hong Kong

Asked about the Vatican’s silence on Hong Kong, the archbishop asserted that “in Hong Kong, obviously, the Catholic community in itself is significantly divided on the policy. There are, you might say, Beijing loyalists on one side and then there are people who would like greater freedom and greater exceptions for Hong Kong. We try to work with the local church and do what we can in that way.”

“Again, I don’t think that ‘grandstanding’ statements can be terribly effective,” he added. “I think you have to ask what effect [a statement] is going to have? Is it going to produce a positive change, or does it make the situation more complicated for the local church and for relations with the Holy See? At the moment, we feel that’s the right approach.”

On Jan. 3, 2019, Michael Yeung Ming-cheung, the eighth bishop of Hong Kong, died. Since then, there has been a long delay in appointing his successor. Asked to explain the reason for this, the Vatican archbishop said: “Well, I can say that the Holy See is anxious to appoint a bishop for Hong Kong, but it has proven to be one of those processes which is complex and presents difficulties. It’s a bit going back to the classic paradigm of this pontificate; there are certain knots that have to be unraveled, and that’s not going to be easy.”

He said he did not know if an appointment was on the horizon, as the responsibility for this is with another Vatican office, the Congregation for the Evangelization of Peoples.

Unlike in the cases of Hong Kong and the Uighurs, Pope Francis has spoken out strongly on the repression of democracy in Myanmar, which he visited in November 2017. About Myanmar, the Vatican archbishop said: “I don’t think the coup will be reversed. Unfortunately, the policy of the generals will prevail in suppressing opposition to what they have done. Sadly, that’s how I see it.”

Pope Francis’ trip to Iraq was a historic breakthrough. But will it lead to greater peace in the Middle East?
Gerard O’Connell

He drew attention to “the context in which it is all taking place” and added that this is “a region of other authoritarian governments as well, so it is not as if they are getting denounced by their neighbors. I think that unfortunately the generals will not go back, and maybe international sanctions will have some impact but the generals have chosen their course, and I don’t think that will be changed.”

When asked whether or not the church supports democracy, the archbishop replied: “Well the Second Vatican Council, and indeed Pius XII years before the council, said democracy represents a form of government that very much corresponds to Gospel values. But obviously we do believe that democracy has different forms, and democracy has to be inculturated.”

Democracy is not an ideal; it’s a political culture, and democracy gets into difficulties if that culture is very superficial because then it can easily be abused or rolled over.

“Yes, the church is supportive of democracy,” he added. “At the same time, however, the history of the Christian church has always been that we can live with many forms of government, and we have done so. Democracy is a relatively new child on the block. In some places it’s doing well but, as we’ve seen only recently, democracy is often challenged and threatened and is not appreciated by everybody. Now the church has to live with that reality. So, it’s not as if we put our faith in democracy alone. I think we have more [of] a vision of individual responsibility in terms of social action and commitment, and let the states determine the evolution of their own form of government.”

When asked about movements in countries like Myanmar and elsewhere where the people have expressed a strong desire for freedom, the Vatican archbishop said that “that’s obviously fundamental, and we would be very supportive of that. You have seen this in Myanmar where Cardinal Charles Bo and many of the clergy and religious are very much on the front line of what’s going on. We would be supportive of that.”

“What democracy actually means in a particular context, at a particular historical moment, is another question,” he added. “There’s no formula for democracy, I think. After all, democracy is not an ideal; it’s a political culture, and democracy gets into difficulties if that culture is very superficial because then it can easily be abused or rolled over. Whereas there are countries that have had several centuries of democratic rule where people’s instincts, whatever their political opinions might be, are fundamentally democratic, but that is not true for an awful lot of places.”