Biden’s vow to ‘cut child poverty in half’ is ambitious. But is it ambitious enough? 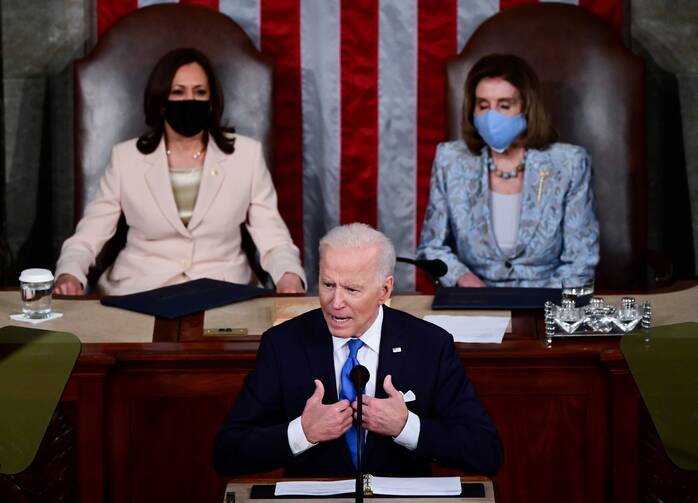 President Joseph R. Biden addresses a joint session of Congress in the House chamber of the U.S. Capitol in Washington on April 28, 2021. (CNS photo/Jim Watson, Pool via Reuters)

The American Families Plan, a $1.8 trillion legislation package proposed by President Joseph R. Biden, includes the permanent extension of a tax credit to fight child poverty. It also includes spending for child care programs and universal prekindergarten, part of a campaign to “cut child poverty in America in half this year,” as Mr. Biden vowed in his speech to Congress on April 29.

The United States now faces an array of economic justice issues, including income inequality, racism and the unequal effects of climate change and of the Covid-19 pandemic. Should child welfare be near the top of the list, given that the number of U.S. children living in poverty has gone down in recent years? Does the political vulnerability of children and families with young children—they do not have the voter clout of senior citizens, and this generation gap has only worsened because of a steadily declining birth rate—mean they should be given particular attention? To take a more long-range approach, should the United States encourage more families to raise children to help prevent a potentially calamitous population decline?

About one in seven U.S. children live in poverty; this translates to nearly 11 million individuals.

About one in seven U.S. children live in poverty, at least according to the federal government’s measure, and this translates to nearly 11 million individuals. This is not a new phenomenon: The 14.4 percent of all children in 2019 who lived below the official poverty line was down significantly from 22 percent in 2010, when the rate was still cresting because of the 2008 financial crisis.

In fact, last November, the Pew Research Center analyzed historical data and determined the child poverty rate had reached a “record low”—that is, before the pandemic hit. In 1959, the earliest year for which the U.S. Census Bureau provides a breakdown by age, the child poverty rate was 27.3 percent, nearly double what it is now. (In 1959, the poverty rate among U.S. residents over 65 was reportedly even higher: 35.2 percent. In 1974, the downward lines intersected, and poverty has been higher among children than among older adults—now at 8.9 percent—ever since.)

But while the overall child poverty rate may be historically low (again, assuming a complete post-Covid recovery), there are more specific measures of economic vulnerability that are still alarming. For example, the decline has not wiped away differences between racial groups: In 2019, 26 percent of Black children were living in poverty, compared with 21 percent of Hispanic children, 8 percent of white children and 7 percent of Asian children. Significant differences between states also remain: A 24/7 Wall St. analysis of census data from 2019 found child poverty rates ranging from 7.1 percent in New Hampshire to 28.1 percent in Mississippi.

The high cost of housing has become an ever-increasing financial burden for U.S. families over the past century.

In March, the Children’s Defense Fund highlighted other areas of concern in its annual State of America’s Children report. One is housing insecurity. According to the C.D.F., more than 1.5 million children enrolled in public schools experienced homelessness during the 2017-18 school year. The C.D.F. further warned that a “lack of affordable housing and federal rental assistance leaves millions of children homeless or at risk of homelessness,” and it noted that more than one in three children in the United States “live in households burdened by housing costs,” meaning that more than 30 percent of family income goes toward housing.

Indeed, housing has become an ever-increasing financial burden for U.S. families over the past century. According to the U.S. Department of Labor, in 1918-19, the typical U.S. family spent 38 percent of its income on food and 23 percent on housing. By 1960, the share devoted to food had dropped to 24 percent, while housing had gone up to 30 percent. In 2018-19, food accounted for only 13 percent of family spending, and housing was up to 33 percent. (Transportation, a negligible cost for most families a century ago, hit 17 percent.) Child hunger certainly remains a problem in the United States, but while spending on food stamps and school-lunch programs can make a quick difference in alleviating hunger, solutions to the housing crisis are more complicated and politically risky.

Among Schoolchildren
The Editors

This year’s C.D.F. report also points out that an estimated 4.4 million children still lack health insurance, and that “the high cost of child care and lack of early childhood investments leaves many children without quality care during critical years of brain development.” During the 2018-2019 school year, according to the C.D.F., only 34 percent of 4-year-olds and 6 percent of 3-year-olds were enrolled in a state-funded preschool program. As for the availability of child care, the C.D.F. reported that accredited infant care costs even more than public college tuition in 28 states.

Mr. Biden’s American Families Plan takes both broad and targeted approaches to fighting child poverty. It would extend this year’s temporary child allowance (most families receive $3,000 a year for each child ages 6 to 17, and $3,600 for each child under 6) but also direct $200 billion toward free, universal preschool; spend $225 billion to provide and to help families pay for child care; and expand child nutrition programs.

The federal government has historically been less active in addressing the supply and the cost of housing for low-income families, but if the statistics on child poverty continue their current trends, housing may become more of a national political issue.

RobertDSullivan
Provide feedback on this article
Join the conversation: Login or create an account
Before you can comment, you need to update your profile to include your first and last name, as required in our comments policy. Then reload this page and you'll be set up for commenting. Update your profile