In Toronto, a young carpenter is building ‘tiny shelters’ for the homeless. The city isn’t happy. 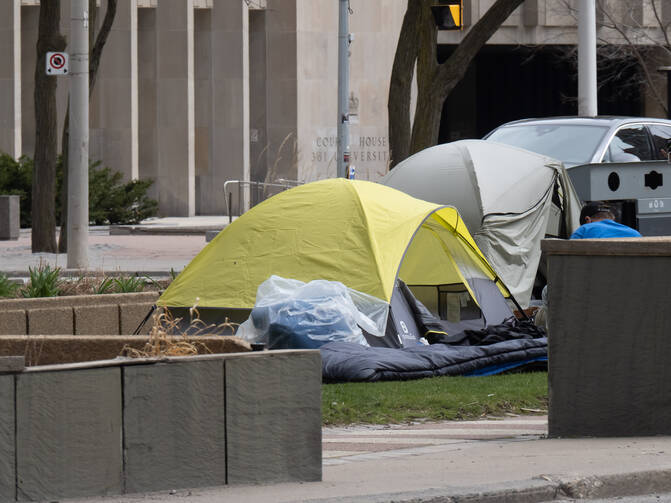 Homeless camp set up in park in middle of University Avenue in downtown Toronto by the Court House during Covid-19 pandemic on April 3, 2020.

Toronto residents have been advised to shelter in place, under restrictions that rise and fall according to the pandemic, since March 2020, when the coronavirus first reached North America. That long-term lockdown was hard enough on people with means and a roof over their heads. For people without housing, however, the idea of “sheltering in place” meant accepting a prolonged lockdown and an escalating risk of exposure to the virus in city shelters that were more overcrowded than usual in 2020.

When some of those people without housing opted to sleep outside in tents rather than accept the heightened risk at the shelters, 28-year-old carpenter Khaleel Seivwright came up with a creative solution to help them. He began designing and constructing wooden “tiny shelters”—insulated structures of 2 by 6 feet outfitted with door locks and smoke and carbon monoxide detectors—and began offering them for free to people in need.

Occupants of these tiny shelters report feeling warm, safe and finally able to get a good night’s sleep. It seemed like a humane option to get through the winter spike in shelter demand, but the City of Toronto was displeased by the impromptu plywood villages emerging on public grounds. It sought a court order on Feb. 12 against Mr. Seivwright, citing municipal bylaws that prohibit camping in parks and asking for a court order to permanently prevent him from constructing and distributing more of the shelters.

When some people without housing opted to sleep outside in tents rather than accept the heightened risk at the shelters, 28-year-old carpenter Khaleel Seivwright came up with a creative solution to help them.

Mr. Seivwright called the city’s push for an injunction against his efforts a “distraction” in a video statement, adding that the city chose this contentious path to stop his efforts instead of working with him. “The problem is not the tiny shelters,” he said. “The problem is that Toronto’s most vulnerable people are falling through the cracks.”

He plans to test an injunction in court. “Now that the relief shelters built by Mr. Seivwright have become a prominent symbol of the encampments and a reminder of the governmental failures that have exacerbated the housing crisis, the city’s solution has been to make them invisible,” charged Danny Kastner, a lawyer with Kastner Lam L.L.P., a member of Mr. Seivwright’s legal team.

His lawyers will argue that the bylaws invoked against Mr. Seivwright are unconstitutional since enforcing them “will mean jeopardy to the life and health and safety of these encampment residents,” said Mr. Kastner.

Toronto’s efforts to stop the tiny shelter campaign has been roundly criticized by citizens. Health care workers wrote a letter to Mayor John Tory and city councilors challenging some of the city’s messaging around the injunction. A petition calling on the city to drop the injunction application sponsored by Mr. Seivwright and his supporters garnered nearly 100,000 signatures, and a GoFundMe campaign, initially launched to pay for building materials, now is also being used to cover legal costs. It has raised over $250,000.

Support for Mr. Seivwright has also come from Toronto’s Christian community. A letter signed by representatives from 52 churches and over 250 individuals urged Toronto authorities to abandon their court campaign to stop the shelter construction.

Khaleel Seivwright: “The problem is not the tiny shelters. The problem is that Toronto’s most vulnerable people are falling through the cracks.”

“Almost every week, we are made aware of someone we know who has died on the street. Their bodies are found in bus shelters, tents and port-a-potties—right in the middle of this world class city,” the letter points out. “The marginalized are not being cared for; instead, they are being neglected and forgotten.”

Two organizations associated with the Sisters of St. Joseph are among the Catholic signatories of the letter: Faith Connections, a ministry for young adults, and the Ministry for Social Justice, Peace and Creation Care. Sister Georgette Gregory, who became congregational leader for the sisters after decades working with homeless people in Toronto, said the letter is in keeping with the congregation’s mission.

“In the shelters there are fights; there’s poor health; people are coughing; they pass things on; there’s bedbugs and stealing,” she said. “And they’re in very close quarters. Many [people without homes], because of the pandemic especially, have not wanted to go into the shelters. [Mr. Seivwright] has tried to help the cause.”

Sister Gregory added that bylaw infractions are not what the city should be prioritizing now. “It’s true [the shelters are] on some grounds that are city grounds, but we’ve got to get past this thing of, ‘Those are our grounds and you shouldn’t be there,’ and say, ‘What is the need of this time during the pandemic?’ ”

Sister Gregory argued that an injunction against the tiny house effort would prevent Christians from carrying out their own duty to assist the poor. “Christ said, ‘what you do to the least of our brethren, you do to me,’” she said. “For many people, it doesn't take much to put you on the streets.

“You lose your job and have nothing to go to, and bingo, you’re on the streets. We, as a Catholic, Christian community, have a right to take care of our neighbor, our brother and sister. I think that’s the thing we have to keep seeing.”

“We, as a Catholic, Christian community, have a right to take care of our neighbor, our brother and sister.”

The story brought more attention to Toronto’s housing crisis and its chronically overburdened support system for those without housing.

The Toronto Star reports that 2020 was the city’s deadliest year on record for its homeless population. Officially, there were 74 deaths among those who accessed city shelters, surpassing the previous record set just a year earlier. But reliable reporting from the city has been difficult to obtain during the pandemic, and the city has faced criticism for failing to update data on homeless deaths for most of 2020. Still-incomplete public health data suggests the true number of deaths in the homeless population has been about twice the number reported by the city.

Toronto’s homeless shelters were over capacity long before the pandemic struck. The city had a self-imposed goal of not allowing shelter occupancy to exceed 90 percent of capacity, but daily numbers have surpassed that threshold for years. Overcrowded shelters became Covid-19 hotspots, and cases linked to the shelters have raged throughout the Toronto community over the last year.

The first Covid-linked death in the shelter system was recorded last May. More deaths in other shelters followed, and sites have been forced to periodically close in response. An analysis published in the Canadian Medical Association Journal reports that homeless people in Toronto have dramatically higher rates of positive Covid-19 test results, hospitalizations and deaths due to Covid.

Catholics in Quebec are leaving the church in droves. Can reinventing parish life save it?
Dean Dettloff

City officials argue that the municipal government is providing adequate pathways to housing for those in encampments, but advocates strongly disagree and have been pressuring the city to leave the encampments in peace. In March, city officials warned encampment residents that a wave of evictions would begin on April 6, but the city suspended that plan after a Covid-19 outbreak hit a hotel that was being used as a shelter alternative for people moved out of the encampments.

Though Mr. Seivwright is awaiting a hearing date at the Superior Court of Ontario, likely at the end of summer, the city could drop its application anytime. Sister Gregory and Mr. Kastner both hope that will happen soon.

“We know that there are individuals within the city bureaucracy who are supportive of Mr. Seivwright, and some have expressed it quietly,” Mr. Kastner said. “We hope as time goes on, those voices will become louder because the city is in a position to do a lot of good here if it chooses to.”

Mr. Seivwright’s insulated shelters provided respite during the cold months of the winter, when demand for shelter access increases in Toronto. But summer will bring different challenges.

Advocates have spent years calling for more cooling centers in Toronto, pointing out the adverse health effects of extreme heat in addition to extreme cold. The city’s approach to housing has left many cracks, and as it tries to prevent citizens like Mr. Seivwright from filling some of them on their own, more Toronto homeless people will likely fall through them between now and next winter.