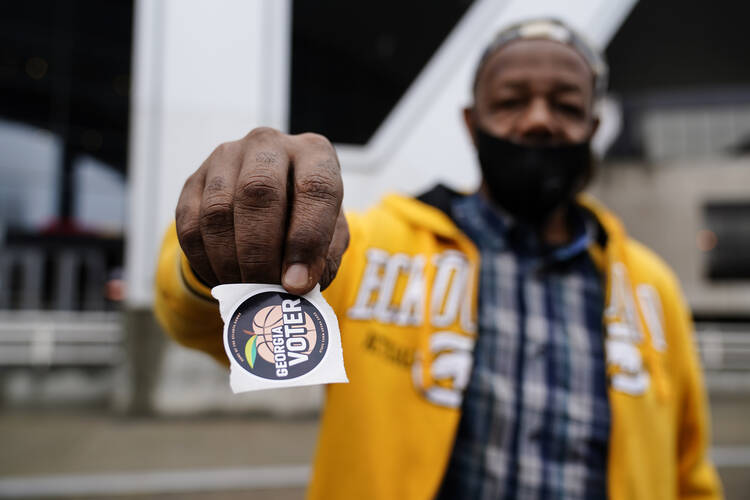 Georgia’s recently passed voting law, the Election Integrity Act of 2021, brings into stark relief the need for Catholic social thought to inform public life. Like hundreds of similar laws being proposed across the country in the wake of 2020's presidential election, it makes it more difficult for many residents to vote, exacerbating the greater difficulties already faced by voters of color. Supporters argue that the law will limit voter fraud without unreasonably burdening would-be voters, but many of these would-be voters vigorously oppose the law, and its critics argue that claims of widespread voter fraud are unfounded.

Indeed, after reviewing the 2020 election, in which just shy of five million Georgia voters cast ballots, the state’s Election Board announced that it was referring only 35 cases of election-law violations for prosecution (most of them involving individual noncitizens or former prisoners who tried to vote and may not have been aware they were ineligible). The Election Integrity Act seeks to address these 35 cases by restructuring Georgia’s election process in a way that may undermine the ability of tens of thousands of eligible voters to cast their ballots. What does it say about the United States that we seem more eager to restrict voter participation through such disproportionate means than to regulate gun ownership or mitigate harms to the environment, despite the clear evidence for the life-saving implications of the latter measures?

Voting is one of the primary means for people to engage in self-governance and to shape social structures in accord with the common good, so it is considered a human right and duty affirmed by Catholic social teaching.

The right to vote and the means to cast a ballot are fundamental aspects of both subsidiarity and solidarity with the most vulnerable among us. Voting is one of the primary means for people to engage in self-governance and to shape social structures in accord with the common good, so it is considered a human right and duty affirmed by Catholic social teaching. “Gaudium et Spes,” from the Second Vatican Council, tells us that “all citizens” should have the opportunity of “freely and actively taking part...in the direction of public affairs.” This is not to say that certain restrictions on voting access, such as voter ID laws, are always incompatible with church teaching. However, any burden on voting rights must be necessitated clearly by the evidence and must not disproportionately burden marginalized communities, whose participation we are called to prioritize.

In addition, the principle of subsidiarity maintains that problems should be assessed and resolved at the level that is both capable of addressing them and also closest to the people. When people, families and communities are unable to respond adequately to the demands of justice, both subsidiarity and solidarity require that those in more privileged positions work to ensure that they have the tools they need, and to dismantle unjust structures that perpetuate their vulnerabilities. Subsidiarity also demands that we consider the perspectives of the communities that will be most affected by public policy. Thus, if election fraud is proven to be a legitimate problem, those in danger of being disenfranchised should be consulted regarding ways to limit the fraud while maintaining ease of access.

These principles were not evident in Georgia.

Now, in the spirit of solidarity and subsidiarity, we should listen to the communities most affected by the new law. On a personal level, we can offer financial or volunteer support to community organizers in Georgia who are working to promote voter registration and access, and to amplify the voices of the people in their communities. We must also listen to their views of our attempts to protest systemic injustice, rectifying any harms we might unintentionally perpetrate. For example, businesses that withdraw from the state, as Major League Baseball did in moving its All-Star Game, should be careful that their attempts to signal solidarity with communities of color in Georgia do not harm those very communities.

If election fraud is proven to be a legitimate problem, those in danger of being disenfranchised should be consulted regarding ways to limit the fraud while maintaining ease of access.

It is worth noting, too, the irony of Georgia Gov. Brian Kemp accusing Major League Baseball of engaging in “cancel culture” while many of the people in his state stand to have their voting rights cancelled by the implementation of the Election Integrity Act. Further, while many proponents of the law, such as Florida Sen. Marco Rubio, are criticizing “woke corporate hypocrites” for pulling out of Georgia while maintaining business ties with places like China, despite the latter’s persistent human rights violations, their critiques ring hollow. Encouraging a more holistic approach to corporate social responsibility that promotes human rights worldwide is certainly important, but corporate actions that fall short of that ideal can still be effective measures of affirming human dignity. Steps taken in the direction of justice should be affirmed rather than rejected.

It’s too difficult for ‘ordinary’ people to run for office. The For the People Act can change that.
Matt Keller

Efforts to foster subsidiarity through solidarity with our neighbors in Georgia are required by the principles of our faith, a robust understanding of which will help us to engage in them holistically. Pope Francis suggests in “Laudato Si’” that we ask the following questions to determine whether a proposed action like the Georgia elections law is just: “What will it accomplish? Why? Where? When? How? For whom? What are the risks? What are the costs? Who will pay those costs and how?” (No. 185). Leaders proposing voting reforms and those of us responding to those reforms should take these questions to heart.

To determine the answers, solidarity and subsidiarity require that we give more weight to the voices of those in marginalized communities, who will be most affected by a given policy, than to the analyses of pundits and privileged politicians. Further, our responses to their calls for justice should involve some personal sacrifice and practical engagement beyond retweeting articles. We must prioritize the voices of the vulnerable—and be ready to adjust our actions accordingly.