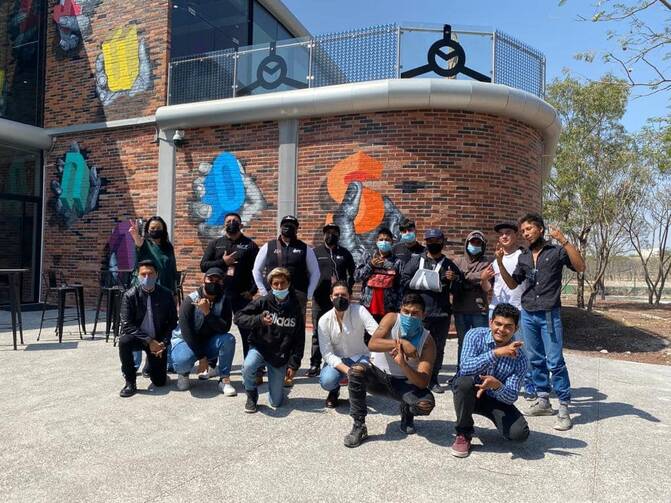 Members of a gang from the Querétaro neighborhood of Menchacas gather at the offices of the state youth secretariat to visit its recording studio, where the young people recorded a hip-hop track on March 20.

The news barely registered amid the many louder headlines that chronicle the latest body count in the gangland warfare that has plagued Mexico for over a decade. But on Feb. 27, 16 gangs in Querétaro City announced that they would sign a peace agreement with Mayor Luis Nava. Gang members in this urban center in the country’s industrial heartland about 130 miles northwest of Mexico City agreed to end their constant turf battles and “pacify” the neighborhoods where they were active. The payoff for this cease-fire? New job and educational opportunities courtesy of the municipal government.

It was a rare bit of good news in a country that last year suffered a record 40,863 murders, but it was not the first time a cease-fire between gangs and authorities has been signed. The gang truce in Querétaro was modeled after a similar pact among dozens of gangs in Monterrey, Mexico’s third largest city, secured in 2016. In both cases, a nonprofit called Nacidos Para Triunfar played a crucial role in bringing gang members and civic authorities together.

Nacidos Para Triunfar (“Born to Triumph”) is the brainchild of Juan Pablo García, a former gang member himself who has spent the better part of the last two decades helping vulnerable youths build a better future. He founded Nacidos in 2010 after years as a social worker for the Archdiocese of Monterrey.

The gang truce in Querétaro was modeled after a similar pact among dozens of gangs in Monterrey. A nonprofit called Nacidos Para Triunfar played a crucial role in bringing gang members and civic authorities together.

His faith continues to play a central role in his mission to get gang members off the streets and closer to society’s mainstream. That is no small achievement in a country that for over a decade has mostly focused on military solutions to its escalating crime problem.

“My faith is my base. My tripod, so to speak,” Mr. García told America. “It’s what moved me forward.

“Of all the Catholic communities,” he added, “I’ve learned the most from the Jesuits. They’re true warriors.”

When speaking about his work, Mr. García cannot help but revisit his own past. A product of a broken home, he spent a troubled youth on the streets of Guadalupe in the Monterrey metropolitan area. He became hooked on drugs; his life was full of violence.

“I ran away from home when I was just six years old,” he said. “I spent 13 years on the street. I became a thug, addicted to drugs, and joined a gang.”

It was not until he had a “really heavy” religious experience during a youth meeting sponsored by the archdiocese that he was able to turn his life around. “There was an arrest warrant against me for carrying guns, and just a few days before we had fought with the police. Then we got an invitation for a church meeting for the youth, for gang members,” he remembered.

Mr. García’s faith continues to play a central role in his mission to get gang members off the streets and closer to society’s mainstream.

“So I went there and at one point we were in a meeting of about 90 guys, all members of gangs, some of them of rival gangs. There was a priest preaching the word of God, and that’s when I had a revelation. I felt loved for the first time, at age 20.”

The experience helped him find his vocation, he said. “Through spiritual exercises and church meetings, both in Mexico and Latin America, I found that I was made to do missionary work.”

Mr. García joined the archdiocese to work with vulnerable youths, often gang members and drug addicts just as he had been. Under the guidance of then-Archbishop of Monterrey Francisco Robles (now archbishop of Guadalajara), Mr. García worked on a project called Raza Nueva en Cristo, which recruited former gang members to work with their peers to help make neighborhoods in the city safer. The project received support from César Gómez, a teacher, who helped Mr. García hone his outreach to gang members.

Mr. Gómez “understood that there was an opportunity to do something with the kids,” Mr. García remembered, “that they needed a job, a salary, health insurance.”

Mr. García left his job at the archdiocese in 2010 to set up Nacidos Para Triunfar. The program is not officially affiliated with the church or with any political group or party in Mexico, a deliberate strategy. Through his own experience on the street and from what he learned as a social worker for the church, he developed a unique methodology to reach young people trapped in the gang culture.

“When I started working in Monterrey in 2010 and 2011, the city was basically held hostage by drug-trafficking gangs,” he explained. “Los Zetas and the Gulf Cartel were fighting. There was a war going on everywhere, but it was especially visible in Monterrey. People were afraid to go out to get a coffee, afraid of being carjacked or kidnapped. I saw that the guys in the gangs were the main cause of that.”

“This government is neglecting everything, from agencies that can help these kids to the Ministry of Public Security in preventing crime.” Worse, “the pandemic stopped everything in its tracks.”

To begin his process, Mr. García first figures out which gangs are active in which neighborhoods and which drugs they are running. Once he maps out an area, he gets in touch with gang leaders to start working with them.

“An important part of the process is establishing a dialogue between people and gang members in their neighborhoods,” Mr. García said. “There is always a little war between the kids and [neighborhood adults],” with residents complaining “about the kids being in the street and using drugs, so I’d try to get them in touch with each other,” he explained. “We’d organize activities like painting murals, setting up tournaments, organizing a hip-hop or freestyle [dance] competition.”

“In Monterrey we had a well-formed plan, together with the authorities and with local businesses,” Mr. García said. “We found the [businesses] who would be willing to take the kids in for a formative period of two and a half months. They’d go to workshops about values, addiction, leadership, self-esteem, so that they would learn to be responsible and have the tools to be channeled through these companies.

“We’re trying to change their surroundings, but [the gang members] have to take the lead.” Among the companies that got involved with Nacidos Para Triunfar are OXXO, a chain of convenience stores; the beverage giant Femsa; and the cement maker Cemex—all household names among consumers in Mexico.

Former gang members “need to work, but they’re not finding any opportunities. Their tattoos are often an impediment [to hiring]. They steal because they can’t find a job.”

Nacidos Para Triunfar applied that model in Querétaro. With the pact signed in February, Mr. García hopes to complete the municipal peacemaking process by the summer. After Querétaro, he has been invited to work in cities like Ciudad Juárez and Tijuana, border towns where young gang members are killed on a daily basis and street violence is on the rise.

“These kids need to work, but they’re not finding any opportunities,” he said. “Their tattoos are often an impediment [to hiring],” he explained. “They steal because they can’t find a job.” And those employment struggles “got a lot worse during the pandemic.”

Despite some success stories, gang outreach like Mr. García’s is often overlooked in Mexico, a country apparently better assured by images of heavily armed soldiers patrolling city streets. But organized crime has similarly beefed up its optics with military-grade weaponry and demonstrations of its capacity to counter Mexico’s official security forces. Gang street skirmishes with military and police—which have included blasting army helicopters out of the sky, bloody shootouts, and blockades of burning cars and buses—have paralyzed entire cities.

President Andrés Manuel López Obrador promised an end to Mexico’s drug war when he assumed office in December 2018. Despite his often repeated motto, “abrazos, no balazos” (“hugs, not bullets”), violence has only increased over the past two and a half years.

Mr. López Obrador accused his predecessors of abandoning the country’s poor, preferring to allow the country to plunge into gangland warfare, but his administration has actually spent less on social programs, The president’s most significant security policy innovation was the creation of the National Guard, a paramilitary police force that has achieved little so far to suppress the violence.

“This government is neglecting everything, from the government agencies that can help these kids to the Ministry of Public Security in preventing crime,” Mr. García complained. Worse, “there are no [creative] policies, and the pandemic stopped everything in its tracks.”

Mr. García pointed out that many gang members have a wife or girlfriend and small children, so any project or policy that intends to get them off the street and into society must make sure that would-be former gang members have the means to take care of their families. “Every [gang] kid [represents] a whole family that you have to look out for.

“These kids don’t have goals; they’re more exposed to drugs all the time. Who’s doing something to prevent crime? It’s [anti-crime] work that requires much more depth.” But “the issue of gangs and violence is something that has unfortunately been neglected for many years by every government in power,” Mr. García said.

“The difficult part isn’t to start working with them,” he said, “it’s continuing the work.”

Despite the lack of support from the government, Mr. García remains confident about the effectiveness of his methodology. “I think I can provide an answer to the problem. If the government would only look.” He believes Mexico could be a model for all of Latin America by building a nationwide program to focus on the problem. “These kids want to succeed in life,” he said, “governments can help them.”