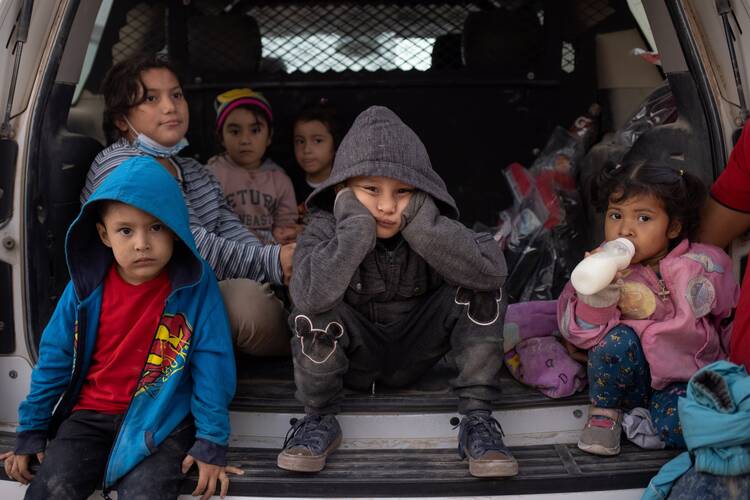 Migrant children from Central America take refuge from the rain in the back of a U.S. Border Patrol vehicle in Penitas, Texas, March 14, 2021, as they await to be transported after crossing the Rio Grande into the United States. (CNS photo/Adrees Latif, Reuters)

Some things have changed on the southern border, but a lot of things remain the same, according to Catholic humanitarian groups on the ground.

The Biden administration last month began processing the asylum applications of migrants under the current Migrant Protection Protocols, a Trump administration policy that empowered immigration officials to return thousands of asylum seekers to Mexico to await court decisions in the immigration court system. The highest concentration of migrants have been waiting in Ciudad Juárez, just south of El Paso, Tex.

Dylan Corbett, the executive director of the Hope Border Institute, has noted an increase in the number of unaccompanied minors in the area. “The United States is obligated to receive, to ensure their safety and to keep them in the least restrictive setting possible—and to reunite them with their families or sponsors in other parts of the country,” he said. But because of the overload at the border, some minors are exceeding a 72-hour court-mandated limit for detention with the Border Patrol.

The El Paso Times reported last week that the Border Patrol was detaining hundreds of unaccompanied migrant children, and many had been in detention for more than two days at a time. Yesterday, White House Press Secretary Jen Psaki seemed to blame the Trump administration for the current trouble at the border, saying the “last administration left us with a dismantled and unworkable system.” The Biden administration is calling on the Federal Emergency Management Agency to manage the record number of unaccompanied immigrant children, The Associated Press reports.

“We can no longer blame the Trump administration. We need the Biden administration to come up with a plan and take responsibility so that we can manage what’s happening here.”

“The unaccompanied minors need space, and we know it’s a concern because of the pandemic,” Mr. Corbett said, explaining that the pandemic has put a lot of stress on the system because of social distancing measures in detention. “But at this point we can no longer blame the Trump administration. We need the Biden administration to come up with a plan and take responsibility and work with border communities so that we can manage what’s happening here.”

Single adults continue to come north from Mexico and Central America, he said. Many try to cross the border multiple times, but because of the pandemic, Border Patrol agents have summarily expelled them back into Juarez under Title 42 public health restrictions.

Families with children are also showing up at the border in El Paso.

“For the most part, nobody is being allowed [into the United States] through this sector, except for folks who are cleared for return under M.P.P. or unaccompanied minors,” Mr. Corbett said.

El Paso is also seeing arrivals from farther south in Texas, he said. The Mexican state of Tamaulipas is blocking the Title 42 expulsion of families with children aged 7 or younger, so immigration officials are flying these families to El Paso. Mr. Corbett said some of those families are being allowed to stay and seek asylum, but others are being expelled into Juárez.

“We have seen families, vulnerable families with children with medical conditions, return to Ciudad Juárez; one child had to be hospitalized,” he said. “Many migrants told us on Saturday that Border Patrol told them they were being released in Houston, but they were being released into Ciudad Juárez. It’s a challenging situation and it’s not clear why this is happening.”

The changes to M.P.P., also known as the “Remain in Mexico” policy, led to a lot of confusion among immigrants and asylum seekers south of the border, according to the Rev. Pat Murphy, director of the Casa del Migrante shelter in Tijuana.

“When you’re telling an asylum seeker that’s in a dangerous situation and has been waiting at the border for more than a year to just keep waiting, that’s a really devastating message.”

“All they heard was the border was open, that asylum was open, when in fact it was only for those who have been on ‘Remain in Mexico’ for the last two years,” the Scalabrini priest said. Migrants have set up a tent city in a plaza near the immigration center in Tijuana. Over the last five days, Father Murphy said, the numbers of those waiting in tents has doubled.

“They think that being there, the government is just going to say, ‘O.K., just come on in.’ But they’re not going to say that,” he said. About half of the people in the tent city are under 15. Advocates have been meeting with the local government to try to persuade officials to set up bathrooms.

“They say if you do [set up bathrooms] it makes them too comfortable. Well, they’re going to go to the bathroom whether there are bathrooms or not, so where do you want to clean up? In the port-a-john or the street?” Father Murphy said.

The priest was also critical of Mexican President Andrés Manuel López-Obrador, who, despite promising action on behalf of migrants, has not done enough, according to Father Murphy. He has seen more migrants coming from southern Mexico, fleeing violence in the Mexican states of Guerrero and Michoacán, a situation the Mexican government has failed to address.

Smaller groups have been showing up at the Casa del Migrante, asking what they need to do for asylum. The shelter is getting 100 calls and numerous Facebook messages each week about asylum, Father Murphy said.

“The desperation of the people is moving them to do anything. And all the 30 shelters in Tijuana are pretty much all full because of social distancing.”

“There is a lot of misinformation, and sometimes that misinformation is done purposefully by the coyotes [human traffickers] in the south, and they say, ‘Go to the border; go north. If you go to the border and wait in line, they’ll let you in,’” Father Murphy said. But the Biden administration has yet to open the border to asylum seekers.

“The desperation of the people is moving them to do anything. And all the 30 shelters in Tijuana are pretty much all full because of social distancing,” he said. The Casa has 150 beds but is only hosting 60 people now—mostly families and children. Nevertheless, they are feeding 100 people a day with takeout breakfast and takeout dinner.

“This is just the tip of the iceberg,” he said. “When the U.S. says, ‘O.K., we’re going to accept asylum cases,’ there are going to be literally thousands of people who are going to come north.”

In the Mexican city of Nogales, Sara Ritchie of the Kino Border Initiative said they are also experiencing an increase in the number of migrants. The increased number has led to an escalation in Title 42 expulsions, she said, which began a year ago on March 21. Ms. Ritchie said a major concern is the growing number of expulsions happening between 10 p.m. and 5 a.m., when advocates are not on hand to intervene. All migrants, but particularly women, are vulnerable to being exploited when they are expelled at the time of night, she said.

Asylum seekers in border camps and vulnerable people seeking to flee Central America “have been enduring the pandemic for a year,” Ms. Ritchie said. Many of them have been out of work and cannot “sustain being unemployed” any longer, their poverty making them especially susceptible to pressure and threats from criminal gangs.

“There is a lot of damage to repair, but there are very clear asks from humanitarian organizations and migrants themselves, and they are quite doable.”

The two hurricanes which rampaged across the region last November only made the economic misery in Central America that much worse, Ms. Ritchie said. “Those push factors have just been exacerbated because of the pandemic.”

“Every administration inherits something, and there is a lot of damage to repair,” Ms. Ritchie said. “But there are very clear asks from humanitarian organizations and migrants themselves, and they are quite doable.”

Some of those immediate actions include ending Title 42 expulsions and accepting asylum claims, ensuring that the United States lives up to the minimum requirements of international law.

“Everything is taking far too long,” Ms. Ritchie said. “When you’re telling an asylum seeker that’s in a dangerous situation and has been waiting at the border for more than a year to just keep waiting, that’s a really devastating message.”

Father Murphy expects changes to immigration and asylum policies will not come quickly.

“Biden can’t overturn everything in a month or so,” he said. “It’s going to be a long haul process. Biden is going to get it from both sides. The people on the ground are going to want him to move really quickly and the people who are anti-immigrant are going to say he’s moving too quickly.”

But the immigration crisis is not going away.

“The reality is that migrants are going to continue coming to the U.S.-Mexico border fleeing a toxic cocktail of causes, whether it’s climate change, or it’s political instability, or violence, or unemployment and the effects of the Covid crisis, or the hurricanes that recently hit Central America,” Mr. Corbett said. “As much as the White House says from the podium ‘Don’t come,’ and even when they say it in Spanish, that’s not going to stop migration.”

It is a time for the Catholic Church to step up its efforts, he said, including providing hospitality and building capacity to receive unaccompanied children. “We need the moral voice of the church right now to make the case to the nation and our policy makers that this is about welcoming Christ in the stranger,” Mr. Corbett said. “And we need the church’s social agencies to step up and collaborate and coordinate in new ways to meet the challenge.”