What does it mean to be both Irish and American? Embracing solidarity with today’s immigrants. 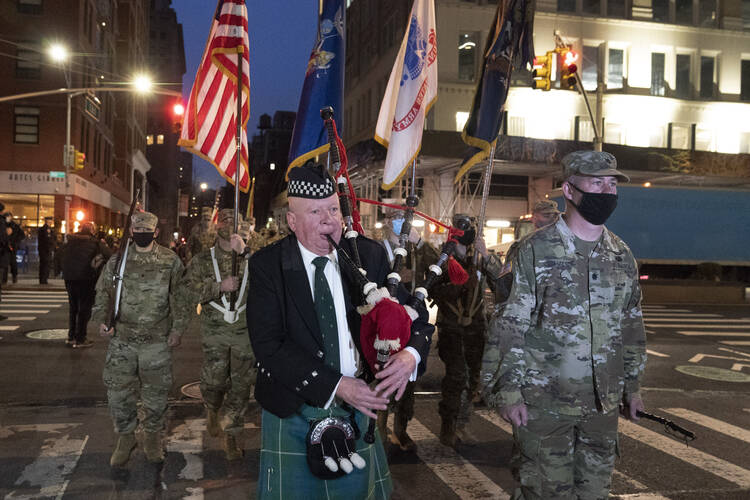 When President John F. Kennedy addressed the Oireachtas (the Gaelic name of the Irish Parliament) in Dublin in June 1963, he spoke movingly of how a country as small as Ireland could have contributed so much to the history and culture of the world. He also noted that Ireland was among the first countries to declare its independence in the 20th century, and her example was a beacon for other small nations. But neither history nor the geopolitics of the Cold War was his primary reason for speaking that day. J.F.K.’s trip to Ireland was an entirely personal one, and given the rapturous reception he encountered, he could not help but reflect on the Irish experience and what it meant.

Much has changed since President Kennedy made that trip to his ancestral home, not only for the Irish themselves but for the Irish-Americans whose ancestors made their way across a vast ocean to find a new life in a new land. Today, Ireland is a modern and sophisticated country. Formerly insular, it is now engaged with the world and uses its influence and good will to affect positive change. Irish America, too, has evolved. Through hard work and greater effort, the Irish in the United States made their way in society and became accepted in the life of the nation—as evidenced by Kennedy’s election as the first Irish Catholic president of the United States. But for those who made the journey over, it was indeed a struggle: a struggle for survival, liberty, faith and, most of all, identity.

Even though the Irish have been in America for hundreds of years, they have had, from time to time, to come to terms with their own view of themselves.

Even though the Irish have been in America for hundreds of years, they have had, from time to time, to come to terms with their own view of themselves. Like every ethnic group that has come to America, they have had to reckon with who they were and who they are. In recent decades, many of these ethnic groups, while seeking equality with their fellow Americans, have come to rediscover and newly appreciate their own heritage. Such introspection and study enriches not only their own lives but the society in which they live. For the Irish, it was—and is—no different. Some of us in Irish-American families are still on a journey of self-recognition and are still figuring out what it means to be Irish and American.

This dual identity has been both a blessing and a burden. Irish-Americans are proud of their ancestry, their culture and their customs. At the same time, they have long seen themselves as 100 percent American and have done what they could to advance the life of their new nation, from building physical infrastructure (roads and bridges and train tracks) to making advances in religious freedom, education, medicine, academia, entertainment, sports and politics (especially politics!). But sometimes it seemed that the Irish might always be labeled with a dual identity, as if nothing they accomplished could be enough for the “natives” to consider them fully American.

Even Joseph P. Kennedy, President Kennedy’s father and a “self-made man” if there ever was one, complained about being described as an “Irishman” by a reporter, prompting the eruption: “I was born here. My children were born here. What the hell do I have to do to be called an American?”

“I was born here. My children were born here. What the hell do I have to do to be called an American?”

The elder Kennedy’s plaintive cry could be the mantra of anyone who emigrates to the United States and hopes to make a life here. At times throughout American history, immigration has not been well understood or popular. Many politicians who themselves have been descendants of immigrants have, to their shame, made political hay out of anti-immigrant attitudes as a means of getting votes—to the detriment of those whose only desire is to share in the promise that is the American dream.

The Irish-American story is replete with heroic deeds and affirmations, especially when it comes to supporting people “struggling to breathe free” (see the American Revolution, the Civil War, the two World Wars, etc.). Despite occasional lapses and lamentable deeds (such as the New York City draft riots in 1863, when Irish-Americans were among those viciously attacking Black Americans), those of Irish ancestry have more often championed the immigrant and the downtrodden.

Yes, some have, in their haste to reach the top tiers of society, apparently forgotten the struggles that brought them to where they are today. Irish-Americans like myself must be cognizant not only of who went before us, but of what happened along the way. That is the lesson of the Irish-American experience, and it is one that can benefit those who come after us: the new immigrants.

Remember that the most famous Irishman of them all, St. Patrick, was himself both a former slave and an immigrant. Thanks to his great faith, perseverance and determination, he changed not only himself but the land he came to call home: Ireland.