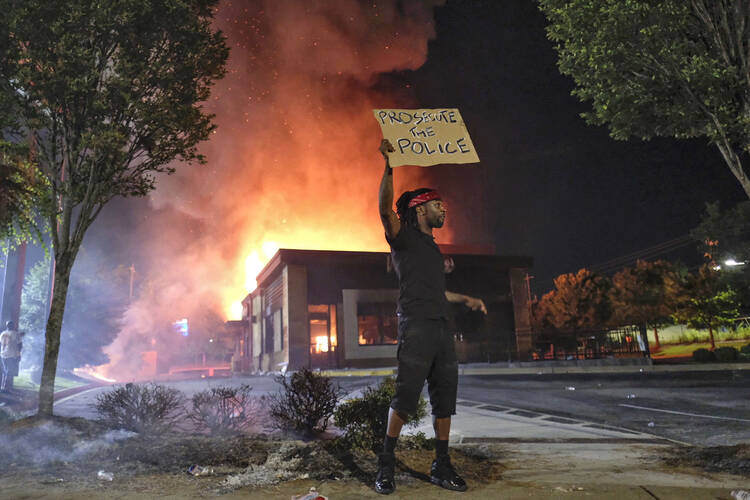 A person holds a sign as a Wendy's restaurant burns Saturday, June 13, 2020, in Atlanta after demonstrators set it on fire. (Ben GrayAtlanta Journal-Constitution via AP)

As we witness America’s explosive response to the killing of one more black man crying for his life, it is strange to realize that people right next to us seem to be looking at events through very different lenses. Some pour grace upon the protester, some upon the state. Some question tactics: Why don’t they do X? Wouldn’t Y have been more productive? Would Martin Luther King have done that?

With little acknowledgment of our place within society, we make these pronouncements. As an American from an Irish-Catholic background, I have all sorts of opinions on how we should respond to this moment. (And God help me, we must respond.) But it is just a little too rich for me to tell a man how to react to a system that is crushing him but has worked out mostly fine for me. Indeed, it is designed to do just that.

It wasn’t always so. Not so long ago, through no fault of our own, the Irish-Catholic citizen was very much on the wrong side of the American system. When it finally crushed us, we responded with what is thought to be the largest and most destructive civil disturbance in U.S. history. And it was a response that stills me to sickened silence whenever I am tempted to opine on the appropriate way to respond to today’s outrages.

It is just a little too rich for me to tell a man how to react to a system that is crushing him but has worked out mostly fine for me. Indeed, it is designed to do just that.

It was 1863, in New York City during the Civil War, when Irish-Americans were stirred by the enormity and shock of seeing Irish name after Irish name published in the casualty lists coming back from the battles. Inflamed and brokenhearted over the deaths of their young men, they took to the streets of Lower Manhattan.

The logic of angry crowds quickly finds a life of its own. A new draft lottery had been announced, and black New Yorkers, not considered citizens, were exempt. While wealthier young men would be allowed to buy their way out of the draft, it was the working-class, white urban poor who were to fill the rosters of the Union Army. And it was they who would continue to fill the graves.

A web of long-unspoken grievances and dark alliances was exposed, and rather than directing their fury at the well-heeled masters of their community’s tragic fates or perhaps at the privileged young men who bought their way out of a conscription that was a one-way ticket to eternity for so many Irish-Americans, the protesters instead targeted black neighborhoods and institutions. Not only were black New Yorkers already rivals for the “muscle jobs” available to the Irish-American community, but the city had been a big beneficiary of the cotton trade and so support for the Union cause was mixed.

The war was, at least in the tragic logic of that moment, understood to be a war to benefit the black population, paid for in Irish-American blood.

Irish mobs attacked black individuals in the street, and the Colored Orphan Asylum at 44th Street and Fifth Avenue was burned to the ground.

Over five hot days and humid nights in July, rioters destroyed Protestant churches, police stations, boarding houses and businesses catering to black sailors, and the homes of black families. Irish mobs attacked black individuals in the street, and the Colored Orphan Asylum at 44th Street and Fifth Avenue was burned to the ground.

By the riot’s second day, the destruction was so vast that President Abraham Lincoln was forced to recall troops from the front to help protect the city, restore peace and guard New York’s vulnerable weapons arsenal. A full five regiments eventually arrived from Gettysburg, and several thousand troops would remain garrisoned in New York City through the end of the summer.

While most of the approximately 120 killed (that number is unreliable, and some accounts have placed that figure much higher, even over 1,200) during the riots were the rioters themselves, among the dead were four New York City police officers. Rioters killed one on the spot, and three others sustained injuries and died later. Police Superintendent John A. Kennedy, recognized by the crowd despite his civilian garb, was badly beaten. Despite firefighters (including one entire company) being leaders in the rioting crowds, when their colleagues responded to burning buildings, their fire wagons were overturned and their horses killed. Telegraph wires were cut to keep police officers from calling for reinforcements. Approximately 50 buildings were burned to the ground. A large group of rioters set an armory on fire, only to have it collapse and kill many of them as they tried to seize the contents.

Black men strung up and lynched by Irish-Americans in New York, in the midst of the Civil War. It turns the stomach to acknowledge, but the truth is unavoidable. Catholics did this.

White women with black husbands were an additional target, as well as prostitutes who were believed to consort with black clients. Black laborers were set upon viciously and mercilessly in broad daylight. Before order was restored, 11 black men had been hanged in the street.

Black men strung up and lynched by Irish-Americans in New York, in the midst of the Civil War. It turns the stomach to acknowledge, but the truth is unavoidable. Catholics did this: Their justifiable anguish at their loss somehow turned into most hateful evil in the cauldron of mob psychology.

Even if an accurate accounting of fatalities and injuries was knowable, it would not fully plumb the measure of death and destruction. With the Army of the Potomac now needed to help police in the North while defending the nation from the South, the ultimate outcome of the Civil War was delayed and its historic carnage carried on that much longer. Some historians looked at the riot and its aftermath as one of the Confederacy’s most decisive victories. Demographics altered as black families fled the city, most resettling in Brooklyn, and it took generations for Manhattan’s African-American population to recover.

If we do not enter this moment with the perspective that history can provide, that tragedy of 160 years ago will be perpetuated, even as our churches open and we return to sacramental life.

This may sound like a lecture, but I am not a teacher. At one point, however, I was a deep-diving student of Irish and Irish-American history. And what I learned was that I, along with my fellow Irish-Americans and my fellow Irish Catholics, am heir to a glorious history that has gifted the world so much, but I am also heir to the burden of horrific, almost unthinkable legacies, and the New York draft riots stand out among the most ghastly. To be sure, there were individual acts of heroism—men and women who kept their heads over those terrible days and nights and opposed the murderous tide. (Varying contemporary reports told of the superintendent and head matron of the Colored Orphan Asylum—joined in some accounts by a small band of rescuers led by an Irish-American figure named Paddy McCafferty—leading the orphanage’s hundreds of children to safety just in time, as the arriving fire company fought both the mob and the flames.) But the mania that swept through the throng owned the day, and by the time the week was over, the reckoning had begun, a reckoning that in some ways is still going on today.

As another cauldron, heated by complex social forces both new and old, has turned the justifiable rage of some protesters into something far more destructive, it is tempting for today’s Irish-Catholic and all white Americans to judge and dismiss the protestors before them, or to stop distinguishing between those lost to the thrall and those who continue to exercise blessed restraint. But it is more than just a handful of history readers who will flinch at any tone of moral superiority we hear. It is history itself. And the power of history is such that even its flinch can be a great and terrible thing. At some level, I would love to feel morally above the pictures of destruction on my screen. But not only do I know I would have to abandon all pretense of honesty to put myself in that place, I would be turning away from the urgency of this moment—one I am called into, as all Americans are called.

That is the burden of history. We see pictures of Dr. Martin Luther King Jr. marching defiantly but peaceably and see a few white faces in his processions, perhaps clergy or other religious. Many Irish-American Catholics might strain to see our own features in those faces and be quick to claim that legacy. But none of us can honestly connect ourselves to those brave marchers without accepting that we are also connected to the thousands upon thousands of Irish-Americans who went to Mass one Sunday, returned the next Sunday, and in between watched the burning of an orphanage and the hanging of innocent men left to die in the street—the sacrament still within them, crying out to ears that would not hear.

It is an American tragedy—one that would be, frankly, terrific to forget. But history challenges us to see ourselves in both the struggle and the sins of this moment—the sins of the system and the sins of the street. If we do not enter this moment with the perspective that history can provide, the racism that fueled the fires of hatred 160 years ago will burn on in a system that continues to oppress and kill our black brothers and sisters today, even as our churches open and we return to sacramental life.

And that would be unthinkable. 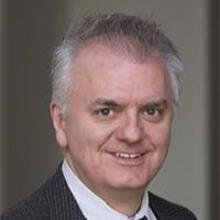 Edward Hoyt is a writer living in Baltimore. He has written for Catholic Relief Services, The Baltimore Sun, The Catholic Review and The BARk magazine, among other outlets.