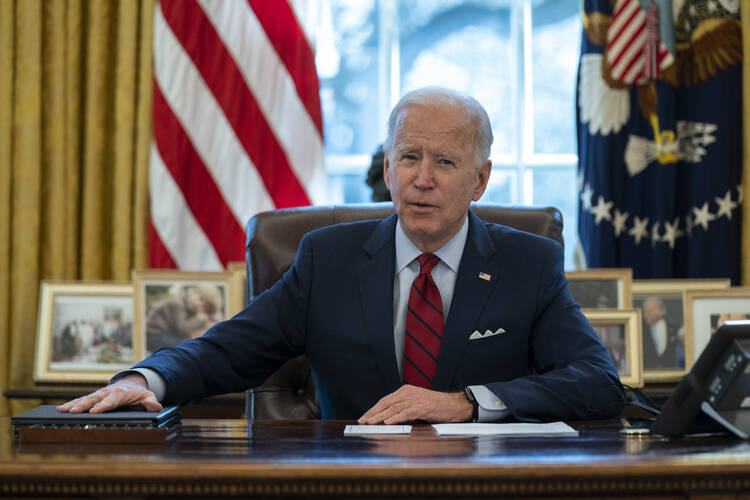 On Jan. 20, President Joseph R. Biden Jr. delivered a call for national unity and reconciliation and pledged that his “whole soul is in this: Bringing America together. Uniting our people. And uniting our nation.” On Jan. 28, Mr. Biden rescinded the Mexico City Policy, which bars federal funding for international organizations with any involvement in providing or promoting abortions, delivering a symbolic and policy victory for the pro-choice movement. He also did serious damage to his own goal of unifying the country and missed a major opportunity for political courage.

The Mexico City Policy, first instated by Ronald Reagan in 1984, is a routine political ping-pong ball. Democratic presidents who have promised support to the pro-choice movement rescind it; Republican presidents who have promised support to the pro-life movement reinstate it. It provides a reliable way to motivate and reward constituencies in the base, and so it serves as a kind of ratchet, deepening Americans’ already profound divisions over the morality of abortion.

Donald J. Trump reinstated the policy during his first week in office. At the time, I wrote that the juxtaposition of his pro-life action on that front and his nativist anti-immigrant executive actions a day later revealed that he was motivated by political expediency, not pro-life consistency. Pro-choice citizens, I said, would not see in Mr. Trump’s action a “principled defense of the dignity of human life” but instead the “latest salvo in a partisan war, in which abortion is mostly a proxy battle.”

A similar analysis, sadly, applies to Mr. Biden’s action yesterday. It does not primarily demonstrate a principled moral conviction about a right to abortion but rather loyalty to a pro-choice lobby that neither brooks dissent nor permits nuance on this question. And, as with Mr. Trump’s action, because it demonstrates that the culture warriors are calling the shots, it does nothing to move hearts and minds toward any common ground, whether on the abortion question or on the broader question of national unity.

On Jan. 28, Mr. Biden rescinded the Mexico City Policy, doing serious damage to his own goal of unifying the country and missing a major opportunity for political courage.

I am not arguing that Mr. Biden should pretend to be pro-life for the sake of unity after campaigning on the standard—and increasingly absolutist—pro-choice positions required of Democrats seeking national office. Rather, I am pointing out that he is missing a significant opportunity to do something new and courageous that could potentially advance the cause of national unity and perhaps even break open some real common ground in our national conversation about abortion.

Imagine if, instead of simply handing a victory to the pro-choice base, Mr. Biden had convened a meeting between pro-life and pro-choice activists, saying: “We’re not going to keep the Mexico City Policy in the form signed by Republican presidents. But before I simply rescind it, I want to hear proposals for a more limited version, which could reduce U.S. involvement in supporting abortion while still providing important support for international health projects.”

The most significant critiques of the Mexico City Policy, called by its opponents a “Global Gag Rule,” are that it leads to worse overall health outcomes because it prohibits U.S. funding for any international organization that will not fully dissociate itself from support for abortion, even if their abortion activities are funded from non-U.S. sources. As a consequence, it restricts support for non-abortion health initiatives and can have a negative impact on the overall availability of health care, especially for women, if there are not enough providers who are willing to comply with the policy.

Tragically, some studies suggest that the Mexico City Policy actually has the effect of increasing abortion rates in some scenarios, likely because it removes funding from organizations that provide family planning services and women’s health care, leaving women to resort to more abortions in their absence. Some pro-choice advocates will take this effect as prima facie evidence of pro-life hypocrisy, which is neither fair nor logical. If refusing to support industries that cause water pollution has the side effect of increasing reliance on factories that cause greater air pollution, the solution is to fix the factories, not to go back to fully funding water pollution.

This is a missed opportunity. Both pro-lifers and pro-choicers can agree that they do not want the Mexico City Policy to increase abortion rates, even while disagreeing about whether or not abortion itself is moral. And Mr. Biden could call them to actually talk to each other about how to avoid that consequence that neither of them want.

Both pro-lifers and pro-choicers can agree that they do not want the Mexico City Policy to increase abortion rates, even while disagreeing about whether or not abortion itself is moral.

That would be brave and unifying leadership. It could also be a political breakthrough. There are plenty of pro-life Democrats, hungry for any sign that their party recognizes they exist, and there are also a significant number of pro-life voters who feel cornered into supporting Republicans no matter the other costs because the Democrats treat their moral convictions about abortion as unworthy of discussion. And because Roe v. Wade has so limited the available ground for legislative or political compromise about abortion, the status quo rewards extremist positions in both parties.

The Mexico City Policy—as well as the Hyde Amendment, which limits federal funding for abortion domestically—are some of the last areas of abortion policy where negotiation might still be politically possible. Americans are authentically deeply divided over the morality of abortion and largely unable to talk or listen to each other to work through these divisions.

Mr. Biden, as a practicing Catholic who does not abide by his church’s teaching on the necessity of legal protection for unborn life, himself embodies this moral division. Though it would be complicated, unwieldy and prone to failure, he has an opportunity to ask the country to reach for something better, rather than simply handing more victories to his political base. It would be a courageous act of unifying leadership if he would even be willing to try.