Republicans use ‘unconstitutional’ in bad faith — and it’s dangerous for the pro-life movement. 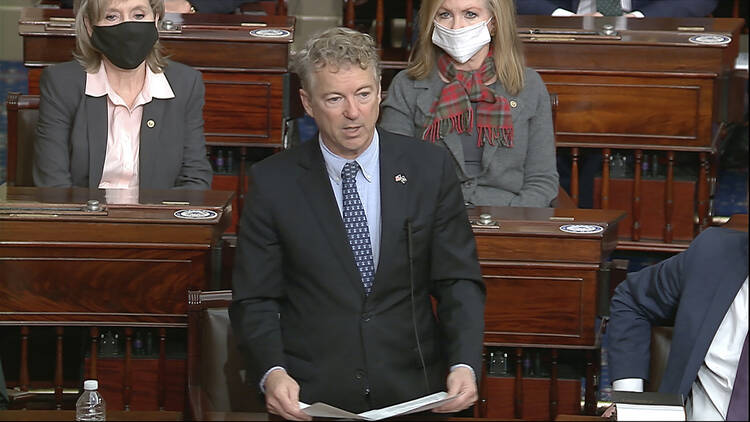 Sen. Rand Paul, Republican of Kentucky, makes a motion that the impeachment trial against former President Donald Trump is unconstitutional at the U.S. Capitol in Washington, on Jan. 26. (Senate Television via AP)

On Tuesday, 45 Republican members of the U.S. Senate voted to support Senator Rand Paul’s objection that an impeachment trial for a former president is “unconstitutional.” On Jan. 6, before the Capitol was stormed, 11 Republican senators had pledged to vote in objection to certifying Joe Biden’s election, primarily over the contention that some states had altered their election procedures “unconstitutionally.” After the insurrection, while the Capitol was still an active crime scene, seven of those senators still followed through in voting to reject some Electoral College delegations.

The bad faith of these supposed concerns about constitutionality calls into question the commitment of the Republican Party to a disciplined interpretation of the Constitution—and even to the project of a government responsible to the voters and designed around the separation of powers that can check and balance each other. And insofar as the pro-life movement is politically identified with the Republican Party, these bad-faith accusations of “unconstitutionality” also weaken the standing of the legal and political case against abortion.

Bad-faith accusations of “unconstitutionality” weaken the standing of the legal and political case against abortion.

Any illusion that Mr. Paul’s objection to the impeachment trial involves a principled commitment to constitutionality can be dispelled by listening to the floor speech in which he described his concerns. Mr. Paul’s speech was nine minutes long; the first 90 seconds and final 30 seconds were focused on his supposed constitutional objection, but he spent most of his time expounding a set of moral false equivalencies. He argued that Democrats could also be accused of “inciting violence” by intense political rhetoric, conveniently ignoring that no Democrats spoke to mobs of people and encouraged the idea that if they marched to the Capitol, they could overturn a “stolen” election.

If this false equivalency were not enough to demonstrate the bad faith of Mr. Paul’s argument about constitutionality (not to mention that he failed to address the precedent of William Belknap, impeached in 1876 after he resigned as secretary of war), his remarks after his attempt to stop the impeachment trial was defeated drove the point home. He said that his gambit proved that the trial was “dead on arrival” because 45 senators had already opposed it as “unconstitutional.” The Constitution was being invoked to provide a kind of straw poll of how the jury of the impeachment trial would vote, perhaps to reassure Republican senators that they would have plenty of company in voting to acquit, no matter how bad Mr. Trump’s conduct had been.

I can—perhaps fairly—be accused of overusing quotes around “unconstitutional,” but it is crucial to recognize that Republican opposition to the impeachment of Mr. Trump, as well as the support given to his disinformation about the 2020 election, has next to nothing to do with the Constitution itself or real arguments over constitutional interpretation. It is an abuse of the Constitution for partisan ends, in which “unconstitutional” becomes a shibboleth for “a political outcome I am unwilling to accept.”

Republicans are collapsing “unconstitutional” into a code word for resistance to their own loss of political advantage.

This is certainly what “unconstitutional” meant in the Republican objections to certifying Electoral College votes (objections that, to his credit, Mr. Paul did not vote for, even though he has spread disinformation about the security of the election). During the parade of lawsuits filed and dismissed or lost after the election, the Trump campaign and its supporters almost never alleged substantive fraud and certainly never presented any solid evidence of it. Instead, their objections were that some states’ changes to election procedure, mostly to make it easier and safer to vote during a pandemic, were “unconstitutional” because they had been implemented by actors other than the state legislatures to whom the Constitution entrusts responsibility for defining the “manner” in which electors are appointed.

These objections were also not in good faith. They were raised too late; they sought the wildly overbroad remedy of disenfranchising entire states after the election; they ignored the fact that state legislatures had already defined election law to include the involvement of the judiciary and electoral commissions in adjudicating disputes about procedure; and they were focused only on the handful of states where overturning election results would have benefited Mr. Trump (even though many states he won had made similar changes to election procedure). Those reasons, among others, are why the objections have been routinely dismissed by the courts.

Despite the many holes in these supposed concerns about the constitutionality of election procedures, they were lumped together, by Mr. Trump and his supporters, into claims of “fraud”—which, even if the constitutional concerns had been accurate, would not have been demonstrated—to argue that the election had been “stolen.” And so the word “fraud,” with the admixture of “unconstitutional,” was broadened to include “too many voters being able to cast their ballot for an outcome I am unwilling to accept.”

The word “fraud,” with the admixture of “unconstitutional,” was broadened to include “too many voters being able to cast their ballot for an outcome I am unwilling to accept.”

We need to recognize that constitutionality was never the point of these objections. The Constitution and its delegation of power to state legislatures regarding presidential elections was merely the last remaining lever of power for Republicans to pull—they controlled the state legislatures in most of the states narrowly won by Mr. Biden—after their president was rejected by a majority of American voters. And so it was pulled, cynically and without regard for what other damage, to the country or the Constitution or the Capitol itself, would follow.

To wit: If Senate Republican leader Mitch McConnell, who voted to support Mr. Paul’s objection to the “unconstitutionality” of the impeachment trial, really believed that it was unconstitutional for the Senate to try a former president, then his clear constitutional duty would have been to recall the Senate from recess in order to begin the trial as soon as the House impeached Mr. Trump on Jan. 13 (while Mr. Trump was still in office and before the Democrats took control of the Senate). But of course he did no such thing because he decided that it was not to his political advantage to do so.

The Republicans claim a devotion to what the Constitution is designed to do—to separate and balance the powers of the branches of government in order to guard against their misuse—but they are instead abusing it to try to hold onto power with an unrepresentative, minoritarian coalition and to maintain the coherence of an increasingly fractious Republican base. Parts of that base are explicitly nativist, xenophobic and racist, and many Republican leaders have proven themselves willing to appease them by smearing as “unconstitutional” any limits on their ability to impose their agenda on the rest of the American people. They have not proven willing to discipline Mr. Trump, whose demagoguery has proven itself to be the real danger to the Constitution and constitutional norms.

That danger will outlast Mr. Trump’s time on the political scene. In addition to whatever damage it does to the country and to the Republican Party, it will also harm the pro-life movement, since so many pro-life leaders supported Mr. Trump so fervently. Sadly, any support for his claims of election fraud and immunity from impeachment calls into question the sincerity of arguments about constitutionality made by many in the pro-life movement.

Be cautious of reducing “constitutional” to mean “political outcomes which I support.” That tendency is why the Supreme Court has become a deciding factor for so many voters casting a ballot for president.

The best legal and constitutional argument that the pro-life movement has is that Roe v. Wade and its successor, Planned Parenthood v. Casey, are poorly reasoned decisions that turned abortion into a constitutional issue, thus eliminating the possibility of reaching any legislative compromise around Americans’ conflicted views regarding the morality of abortion. That is why—at least, that used to be why—pro-lifers supported the appointment of Supreme Court justices with textualist or originalist approaches to interpreting the Constitution. Those approaches provided a consistent rationale for leaving the question of abortion’s legality to the states and to the legislative process, and explained why it is up to the legislatures to make any progress toward better public policy on abortion.

I have never believed that support for Mr. Trump could be morally justified on pro-life grounds, either early in his presidential career or during its final days. And I have argued that the attempts by some Catholic leaders to dominate the consciences of others by telling them they had to vote for Mr. Trump because he opposed abortion were a betrayal of the Gospel and the Catholic tradition. But I also understood that other people committed to the pro-life cause saw the prudential questions around political strategy differently and believed that supporting Mr. Trump as a candidate was the best of a set of bad options.

For pro-lifers, voting for Mr. Trump was supposed to be based, at least in legal terms, on support for a consistent interpretation of the Constitution. But Mr. Trump’s time in office, and the way the Republican Party and most of the pro-life movement has stood by his shredding of constitutional norms, has made that position utterly untenable.

I am well aware that many people who are pro-choice, or people who morally oppose abortion themselves but still consider Roe v. Wade correctly decided, may think that I was being willfully naïve to believe that there was ever a principled constitutional argument involved in the pro-life movement’s alliance with the Republican Party. Perhaps so, though I would say to those people that they should themselves be cautious of reducing “constitutional” to mean “political outcomes which I support as policy goals.” After all, that reasoning is why the Supreme Court has become a deciding factor for so many voters casting a ballot for president.

But sufficient unto a day is its own evil, and the evil of Jan. 6, and the next few weeks until the impeachment trial is concluded, is what we must be concerned with more immediately. Unless more than five Republican senators can find the moral fortitude to cooperate with the Constitution’s design and exercise congressional power to check Mr. Trump’s abuse of his former office, then “unconstitutional,” as used by the Republican Party, will continue to mean merely “things that reduce our political power.” Anyone, but especially pro-lifers, who cooperate politically with Republicans on the grounds that they are committed to a principled reading of the Constitution will be revealed as fellow hypocrites.