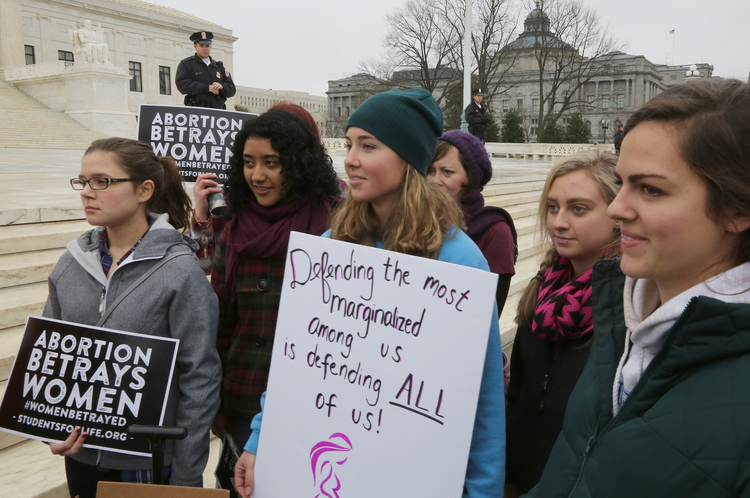 Mary Solitario, 21, center, a Catholic from Virginia, joins a pro-life demonstration outside the U.S. Supreme Court prior to the Women's March on Washington Jan. 21. (CNS photo/Bob Roller)

Earlier this week, the Women’s March on Washington removed two pro-life organizations from its list of sponsors and released a statement reinforcing its pro-choice position. Several pro-life groups voiced displeasure at their exclusion from an event originally billed as an inclusive march for a host of social justice issues. The Heritage Foundation’s publication, The Daily Signal, released a video on Thursday that features several representatives from these pro-life organizations, and a New York Times survey of women’s reactions to this controversy.

“When [Women Speak for Themselves] saw that The New York Times posted an online survey asking for comments from women planning to participate in the Women's March, we blasted it out to the thousands of women on our email list serve,” said Meg McDonnell, the director of W.S.F.T., a pro-life feminist blog. “They flooded the survey, and one of our members—Maria Lyon—was featured prominently in some of their coverage of the march. We were glad to take the opportunity to make our voices heard in the media and public—that abortion rights are not unilaterally a “women's issue.”

“Pro-life women have been the backbone of the grassroots advocacy, pregnancy centers and post abortive ministries for decades,” Ms. McDonnell said, adding, “and there is diversity of opinion among women about what it means to be a feminist.”

Several Catholic groups and many Catholic individuals attended the march despite their disappointment with its overtly pro-choice platform.

“It’s disappointing,” said Sister Deborah Troillett of the Sisters of Mercy, who originally saw this march as an opportunity to bridge differences and serve as a model of cooperation. “If we are not able to dialogue about what we have in common,” she said, “we’ll never bridge those divides.”

"All life is sacred to me,” asserted Sister Patricia Chapell of the Sisters of Notre Dame de Namur, who believes in a consistent life ethic. She sees her pro-life position as extending to all aspects of life, saying she wants to advocate for the responsible use of the resources we have to be directed toward helping the poor and marginalized from the “womb to the tomb,” or from conception to natural death. Whether it’s healthcare reform or prison reform, she said, she wants to advance the dignity of every person.

Reproductive rights was undoubtedly a central issue at the march. Plenty of women attending the march carried posters and chanted pro-choice slogans like “my body, my choice” and “keep your rosaries off my ovaries.”

“I think the removal of those sponsors might have been a wise decision on behalf of the march’s leaders,” noted Danielle Rose, a recent graduate of Emmanuel College. “Based on my observations, the beliefs of the people at the march today and the pro-life motives don’t necessarily coincide. Perhaps it is a good thing that those two worlds didn’t clash and the march stayed relatively peaceful.”

Nevertheless, several pro-choice attendees disagreed with the exclusion of pro-life feminists from the event. Patty Stein, a Catholic participating in the march with her friends, said, “If I have a right to my voice, they should have a right to theirs.”

It’s a woman thing, all about “Women’s Rights” a few men as tag-alongs. Where’s Uncle Sam? I’d say Uncle Sam was a kind of tag-along too? After all he’s a man! The Woman’s March made obvious the rejection of maternity as a “Woman’s Right” making Pro Lifers not a welcomed part of the woman thing, of womanhood. Why?

Maybe a little bit of Jesus would have helped, the Jesus who equated himself to the motherhood of a hen, gathering her chicks with warm maternal protective love, under her wings! How can a woman speak about “Women’s Rights” excluding Mama? What about the woman in the womb awaiting birth and maturity? What about her rights?

Well, probably I have this whole thing wrong, distorted through the clouded lens of masculinity? After all, I’m only a man!

Of special note, today, January 22nd 2017 is the 49th anniversary of the Supreme Court’s decision legalization abortion, resulting thus far in the execution of 59,000,000 not-yet-born American children, truly an American Holocaust! Do you think our Founding Mothers and Fathers would have permitted this?

A hypothetical situation for all men, particularly married men with young children: Your pregnant wife is in the hospital, under anesthesia, facing a very complicated early and caesarian delivery, where it comes down to her life or the life of the unborn. What to do? It's your call. You've got children at home, ages 2, 4 and 6.
As I understand the strict pro-life position of the church, you would sacrifice your wife. A more pastoral view would consider all the factors and would not necessarily force you to sacrifice your wife and the mother of your 3 children.
My point, of course, is that men should carefully and prayerfully think over a strict and narrow pro-life position.

I think there is a real disconnect in this article re the reality of who is behind the March, the fact that the Pro Lifers were absolutely turned away because as the pro-choice person said ..they dont have the same ethos.. or words to that effect. This March was not about life so this article is very confusing. Truth is the March was very much propped up by those who are absolutely against life from conception to natural death; those who are against the family as God made it... note well the placards here and in the UK and other places were the same march ran and there was tragically a lot of hatred and anger portrayed in all of these marches. Someone still has to explain to me 'the racial part'being mentioned et al and the social justice part the sisters are also talking about?

Thank God we finally have a pro life president -Donald Trump - and a man who has declared jobs for all- equality for all!! Are we all hearing what he is saying because somehow there is a true misconnect in what is being reported ..
He will replace obamacare with something for everyone and something affordable ... - this did not happen under the infamous obamacare and just ask Companies who stopped hiring permanent employees
and also ask the Black American citizens - they have made it abundantly clear that Obama never delivered what he promised them... they voted in President Trump because they know he will.

So again what was this March all about? Methinks that George Soros and company had much to do with it!!
Check it out..

So sad to see the sisters walking in such a clear pro abortion, pro LGBT march...