Pro-life Dems protest party’s abortion policy: “If we lose, it’s going to be because of this issue.” 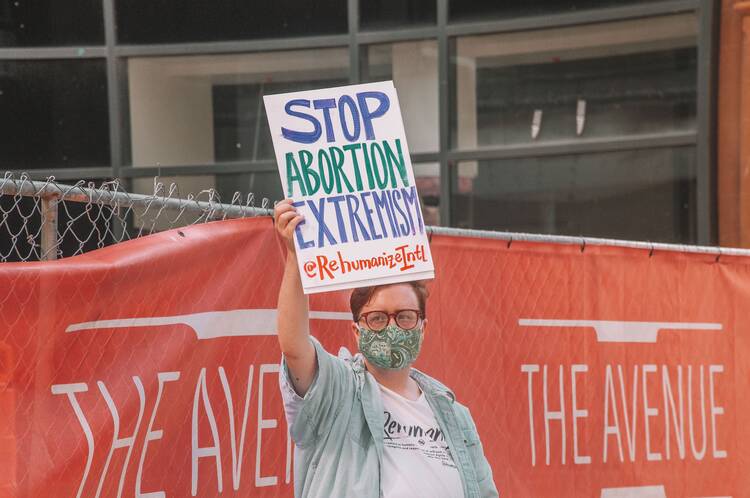 Herb Geraghty, director of communications at Rehumanize International, holds a sign during a pro-life demonstration in Milwaukee Aug. 15, 2020, outside the convention center where the Aug. 17-20 Democratic National Convention was to have been held. (CNS photo/courtesy Maria Oswalt)

On Aug. 17, Democrats for Life of America, a nonprofit activist organization that advocates for pro-life policies, began a series of protests both online and in Milwaukee, where the pared-down Democratic National Convention is being held. Protesters are criticizing the pro-choice positions held by Democratic Party leaders, which include expected presidential nominee Joe Biden and his pick for a running mate, Kamala Harris.

Last week, D.F.L.A. sent a letter signed by over 100 current and former Democratic lawmakers to the Democratic National Committee, asking for a recognition of the pro-life caucus’s views in the party platform. The letter called for the Democratic Party “to avoid divisive policies, such as passing a law in Congress defining a right to abortion.” But they received no response, and the pro-life caucus was not given an official presence at the convention.

D.F.L.A. opted instead to hold a virtual and unsanctioned caucus of their own with a panel of pro-life speakers at the same time as the D.N.C. In addition, they held in-person protests attended by members of D.F.L.A.’s senior membership in front of the Wisconsin Center, the production hub of the mostly virtual convention.

“We want Joe Biden to understand that votes are earned,” Kirsten Day told America. “We’re very concerned about the extreme views on abortion within the [Democratic] platform.”

“It was fabulous,” said Kristen Day, the executive director of D.F.L.A., of the virtual caucus. “It was so inspiring to hear from all these people who agree with us that the Democratic Party needs to moderate its position [on abortion].”

Ms. Day, who has been to every Democratic National Convention since 1996, felt that pro-life Democrats are not being heard by Mr. Biden. “We want Joe Biden to understand that votes are earned,” she told America. “We’re very concerned about the extreme views on abortion within the [Democratic] platform.”

D.F.L.A. are hopeful that their protests will inspire Mr. Biden to once again support the Hyde Amendment, a federal provision that makes it illegal for taxpayer money to be put toward abortion. In 2019, Mr. Biden reversed his position on the Hyde Amendment, having previously supported it for a number of decades.

In addition, D.F.L.A. want support for Roe v. Wade, the Supreme Court decision that enshrined a woman’s right to have an abortion nationwide, to be removed from the Democratic Party platform. They also wish to replace Tom Perez as the D.N.C. chair with someone who, according to Ms. Day, “respects the diversity [of thought] in the Democrataic Party.”

“Why are we turning away 21 million pro-life voters? The party has to decide if they want to die on this hill. If we lose, it’s going to be because of this issue.”

In 2018, Louisiana Governor John Bel Edwards signed one of the most restrictive anti-abortion bills in the United States, setting a precedent for legislative change from pro-life Democrats. But Mr. Edwards’s pro-life stance extends to issues beyond abortion, a view that is shared by organizations like D.F.L.A.. In an interview with America’s editor in chief, Matt Malone, S.J., Mr. Edwards said that “the pro-life ethos has to mean more than just the abortion issue.”

Both Mr. Edwards and D.F.L.A. also advocate for affordable health care. Mr. Edwards, a Democratic governor in a state that went solidly for President Trump in 2016, also expanded Medicaid in his state under the Affordable Care Act. “The job isn’t over when the baby’s born if you’ve got poor people who need access to health care,” said Mr. Edwards.

“We’re going to continue to be vocal,” Ms. Day said. “For a long time, pro-life Democrats were silent because they were afraid of pushback.” Now, Ms. Day explained, figures like Mr. Edwards and U.S. Rep. Dan Lipinski, a pro-life Democrat from Illinois, have given them the courage to speak out. Though Mr. Lipinski lost his seat in a primary contest against Marie Newman, a liberal pro-choice Democrat, Ms. Day said that it was inspiring to pro-life Democrats that he stuck to his position and kept his integrity.

Ms. Day was firm in her belief that Mr. Biden could not win the election without pro-life voters.

“The ball’s in our court,” she said. “If we want to win, we have to be the big-tent party. Why are we turning away 21 million pro-life voters? The party has to decide if they want to die on this hill. If we lose, it’s going to be because of this issue.”

Kevin Christopher Robles is a Joseph A. O’Hare, S.J., fellow at America.