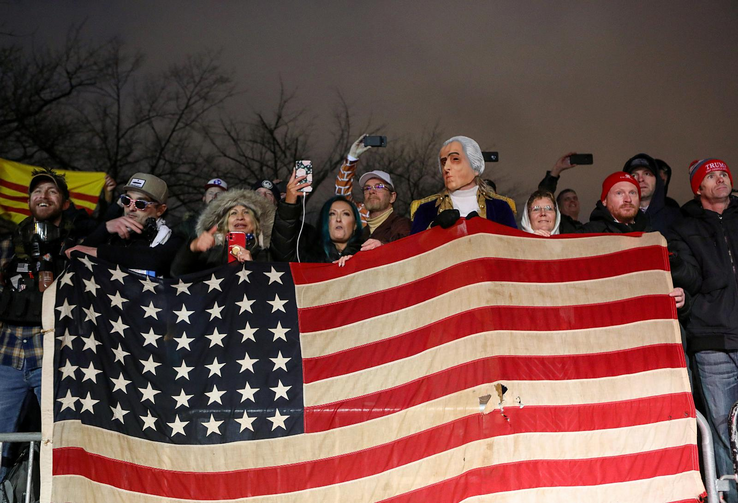 WASHINGTON (CNS) — Dozens of Catholics were among a group of more than 2,000 religious and community leaders who urged Congress to reject any effort to overturn the results of November’s presidential election.

“As faithful citizens, we are praying for a peaceful, smooth and dignified transfer of power,” said the statement, released Jan. 5 by Vote Common Good, an advocacy organization whose website says its job is “inspiring, energizing and mobilizing people of faith to make the common good their voting criteria and to pursue faith, hope and love for a change on Election Day 2020 and prevent the reelection of Donald Trump.”

“As faithful citizens, we are praying for a peaceful, smooth and dignified transfer of power."

“A delayed and drawn-out objection on Jan. 6 would not overturn the will of the American people and change the outcome of the election. It will be nothing but a disservice to the idea of ‘e pluribus unum’ (out of many, one) — and every member of Congress who believes in the sanctity of our democracy should say so.”

Congress convenes Jan. 6 to certify the submission of Electoral College votes. While ordinarily a formality, some Republican lawmakers in both the House and Senate have said they will move to nullify the results in certain states.

In the November election, former Vice President Joe Biden and former Sen. Kamala Harris, the Democratic ticket, defeated incumbent Republican President Donald Trump and Vice President Mike Pence by more than 7 million votes in the popular vote, and by 306-232 in the Electoral College — the same margin that Trump and Pence beat Hillary Clinton and Sen. Tim Kaine of Virginia in the 2016 election — even though Trump-Pence fell short of Clinton-Kaine in the popular vote.

"The courts, including the Supreme Court, have rejected attempts to discount or overturn the results of the election. We are now calling on every member of Congress to honor this result as well.”

President Trump has been turning up the pressure on his vice president in a futile effort to overturn the results of the Nov. 3 presidential election in Congress.

Pence will preside Wednesday over a joint session of lawmakers for the congressional tallying of electoral votes, but his role is only ministerial.

Taking to Twitter, Trump on Wednesday repeated his unfounded assertions that there was widespread election irregularities and fraud — which have been dismissed by federal courts and his own Justice Department.

“All Mike Pence has to do is send them back to the States, AND WE WIN,” Trump falsely claimed. “Do it Mike, this is a time for extreme courage!”

Pence has no such unilateral power under congressional rules that govern the count.

More than 100 GOP lawmakers are expected to challenge the officially certified electoral votes of several battleground states. Majorities in both chambers are required to reject the will of voters, but enough Republican lawmakers have said they will join with Democrats to reject the last-ditch move by Trump allies.

Since the election, the statement said, “the courts, including the Supreme Court, have rejected attempts to discount or overturn the results of the election 59 times and state election officials from both sides of the aisle have repeatedly stated this election was free and fair. Therefore, we are now calling on every member of Congress — themselves elected by the voters — to honor this result as well.”

Catholic signers included Stephen Schneck, executive director of the Franciscan Action Network; Sister Simone Campbell, a Sister of Social Service who is the head of Network, a Catholic social justice lobby; and Sister Ann Scholz, a School Sister of Notre Dame who is associate director for social mission for the Leadership Conference of Women Religious.

Material from the Associated Press was incorporated into this report.