Watergate prosecutor: Trump’s attempt to overthrow the election is criminal—and should be investigated 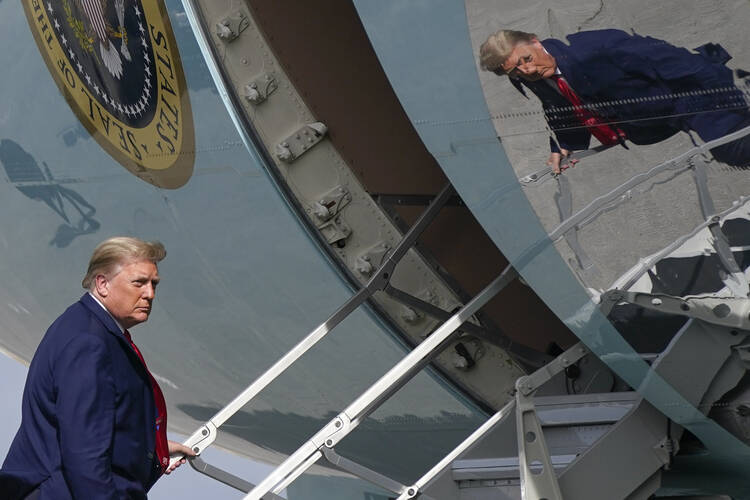 The president’s latest unprecedented moment, a weekend arm-twisting of election officials in Georgia, has created another Trumpian quagmire for the American public: Does it represent just another eyebrow-raising moment in an exasperated countdown to the end or an act of political malfeasance so grave it warrants yet another congressional investigation?

This week the president’s various efforts to overturn the results of the Nov. 3 election have been joined by scores of Republicans in Congress who plan to contest the certification of state counts during what had previously been considered moments of mere electoral formality.

Philip Allen Lacovara served as special counsel to Watergate prosecutors Archibald Cox and Leon Jaworski and, as deputy solicitor general of the United States, argued U.S. v. Nixon before the U.S. Supreme Court. In a recent commentary in The Washington Post, he urged the incoming Biden administration to pursue investigations of criminality by members of the Trump administration, arguing that the president’s unprecedented interference warranted a break with an unspoken tradition of letting “bygones be bygones” as administrations turn over.

“There are actual criminal statutes in both Georgia, as I understand it, and certainly at the federal level in my view that made what Trump was doing downright criminal.”

The weekend’s phone call to Georgia only confirmed him in that opinion. He said he was horrified by what he heard in the conversation leaked to The Washington Post, describing it as “a new low in Trumpian mendacity and abuse.”

“There are actual criminal statutes in both Georgia, as I understand it, and certainly at the federal level in my view that made what Trump was doing downright criminal,” Mr. Lacovara said in a phone and email conversation with America.

“The Biden administration should allow the career professionals in the Justice Department to consider whether Trump’s conduct in office violated federal criminal law,” he added. “Regardless of otherwise prudent reasons for not investigating and prosecuting a former president, Trump’s extraordinary breaches of constitutional norms justify holding him to account in a court of justice.”

“Americans should be concerned about the latest manipulations,” he added, “both Trump’s pressuring the Georgia officials to cook the books by ‘finding’ pro-Trump votes and congressional Republicans’ willingness to vote against the certified results of the Electoral College, simply because they do not like the result.”

Philip Lacovara: “Trump’s extraordinary breaches of constitutional norms justify holding him to account in a court of justice.”

Mr. Lacovara, a member of the board of directors of America Media, called that latter development “even more ominous than Trump’s unique mendacity and criminality.”

The Republican effort, he said, to reject the certified results sets a dangerous precedent that “would transform the American constitutional system, in which the people of the states through the Electoral College mechanism select the president, and substitute a parliamentary system, in which a party majority in Congress selects the president.”

Mr. Lacovara, who describes himself as a “former life-long Republican,” was echoed by conservative officials who felt compelled to speak out as the president continues what has been described as a futile campaign to set aside November’s results.

In a strong rebuttal to the late rush from congressional Republicans in support of the president’s wild allegations of electoral fraud, the former speaker of the House and Wisconsin Republican Paul Ryan called Mr. Biden’s victory “entirely legitimate.” He said in a statement released to media: “All our basic rights and freedoms flow from a fidelity to the Constitution and the rule of law. This principle is not only fundamentally American but a central tenet of conservatism.”

“Efforts to reject the votes of the Electoral College and sow doubt about Joe Biden’s victory strike at the foundation of our republic,” Paul Ryan said in a statement.

He added: “Efforts to reject the votes of the Electoral College and sow doubt about Joe Biden’s victory strike at the foundation of our republic. It is difficult to conceive of a more anti-democratic and anti-conservative act than a federal intervention to overturn the results of state-certified elections and disenfranchise millions of Americans. The fact that this effort will fail does not mean it will not do significant damage to American democracy.”

The U.S. court system has proved an effective bulwark against the president’s increasingly strained efforts to overturn Mr. Biden’s victory, but the possibility that the election in Georgia could have remained a negotiable outcome among a handful of politicians should be a concern to all Americans, Mr. Lacovara said.

“It’s the people that make the system work,” he cautioned. “The system is not self-governing or self-sustaining.” That is why it is so important, he added, that American voters take their responsibility at the ballot seriously.

“After Watergate, there was this burst of euphoria about how the system worked because Richard Nixon was forced to leave,” he remembered. “And I went around the country giving a series of lectures saying, ‘That’s naive and smug.’

“It’s the people that make the system work,” he cautioned. “The system is not self-governing or self-sustaining.”

“This system only works if you’ve got the right people in the right place. And fortunately [Georgia Secretary of State Brad Raffensperger and his general counsel Ryan Germany] were men of integrity, and they resisted. Had they not been, they might easily have said, ‘Well, we’re not certain about these results and we need to have a recount.’ And that would have provided even more substance for this otherwise flimsy effort that the Republicans are making to challenge the results of in the states that Biden won.”

He added that it has become crucial “to educate the American public about the importance of electing people who care about the values that are embedded in the system and who are honest in applying the legal structures, the constitutional structures, even if they don’t like the outcome.”

“The essence of a free society is that the losers, when they lose, have to be willing to accept the decision that makes the winners the winners,” he said. “Once you erode that, then you simply have chaos and you have power, might makes right rather than than a legal process makes right.

“And that’s where we are [today], and I could not be more demoralized that there is such a wide-scale acceptance of what is happening in the country.”

U.S. religious leaders stepped forward this week to urge a quick conclusion of the prescribed electoral process. More than 2,000 faith leaders and religious activists in a statement released on Jan. 4 called on members of Congress to honor the result of November’s election and avoid “a delayed and drawn out objection” as Mr. Biden’s win is set to be certified.

“As faithful citizens, we are praying for a peaceful, smooth, and dignified transfer of power,” they said.

The U.S. Conference of Catholic Bishops declined to comment on the weekend’s revelations.