The Jesuit chaplain of the House is retiring. Here’s what he wants you to know about members of Congress. 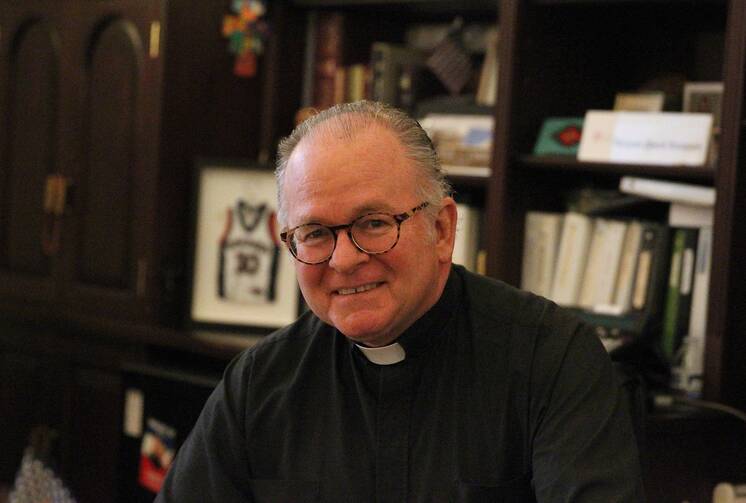 Jesuit Father Patrick J. Conroy, pictured in a May 8 photo, has been the chaplain of the U.S. House of Representatives since 2011. He said he always knew he wanted to work in Congress but never imagined he would do so as a priest. (CNS photo/Rhina Guidos)

When Patrick J. Conroy, S.J, became the chaplain of the House of Representatives in May 2011, he was just the second Catholic to hold the position (his predecessor was the first)—and the first Jesuit. On Dec. 31, Speaker of the House Nancy Pelosi announced Father Conroy’s retirement and his replacement by another historic pick: Rear Adm. Margaret Grun Kibben, the first woman to serve as House chaplain.

“The service of Father Pat Conroy has been a blessing to Members on both sides of the aisle,” Speaker Pelosi said. “Throughout his service, Father Pat fulfilled the calling of St. Ignatius of Loyola: ‘for the greater glory of God.’”

In October 2020, ahead of a deeply divisive national election, Ashley McKinless and Zac Davis, the hosts of the “Jesuitical” podcast from America Media, spoke with Father Conroy about his time on Capitol Hill and what he wants to know about the members of Congress he prayed with and accompanied for almost a decade. Their conversation has been edited for length and clarity.

Ashley McKinless: What are your duties? What’s a day at the Capitol like for you?

Pat Conroy, S.J.: In normal times, I would get to the Capitol anywhere from 8:30 to 9:30 or so. The opening prayer would be at noon. In the morning hours, I would check all the information in my inbox about what was being dealt with that day or what was going on in the world. And I might or might not incorporate that into my prayer. So when the hurricanes were washing away half of Louisiana, I might mention that specifically in my prayer.

But otherwise I just [pray to] God the father of us all or God of the universe—never the God of Jesus Christ. My prayers are not explicitly Christian because they are for the entire House, and the House is not made up entirely of Christians. I want every member of Congress to be able to say “Amen” to my prayer. It may be the only thing they will agree on all day. So I will ask God to bless them with the wisdom and the understanding and the good will to do what’s best within their power to do.

My prayers are not explicitly Christian because they are for the entire House, and the House is not made up entirely of Christians. I want every member of Congress to be able to say “Amen.”

That is the constitutionally provided part of my job as the chaplain. But I am basically available and try to be present whenever members are present. Whenever there are votes on the floor, I go and sit on the floor in case any member might want to stop by and chat with me or might want to ask if they can meet with me.

Zac Davis: What are members of Congress typically looking for in a chaplain? Is it guidance or a sounding board or maybe even someone who is just not explicitly partisan in the House?

The chaplain who is partisan would not be doing their job because they would not be available to the members of the House. So most of them don’t look to me for anything. And the reason for that is they’re in Washington, D.C., doing their legislative work. They don’t need the chaplain. Most of the people who work on Capitol Hill—as stressful as it is and as awful as it is—live in an environment where it does not look good to be weak. And so a lot of them do not bring up their weaknesses in Washington, D.C. Now some do, and I’ve been there for them. Most of them, if they’re members of Congress, take those issues back home to whoever the religious person in their family life is.

The chaplain who is partisan would not be doing their job because they would not be available to the members of the House.

A military chaplain has to be available to all the troops. But the chaplain doesn’t go out into the field and call a soldier away from what they’re doing in order to have a conversation. No—the soldier knows where the chaplain is [and] when they’ve got the time or the opportunity, the soldier acts. And that’s true with members of Congress as well.

AM: I don’t have to tell you that Congress is not particularly trusted or held in high esteem by the American people as a whole. You spend time around individual members of Congress and get to see what their day-to-day life is like. What would you want to tell the American people about what this life and job is like?

Attacking or being upset with a politician is an easy thing to do because politicians, generally speaking, have power, more power than most people have. So when people think that they are abusing the power or not using it well or that they are really not bright enough to use the power that they have—they’re pretty easy to pick on.

I get that. The work of a politician is the kind of work that doesn’t sell very well when you’re talking about human values, spiritual values, even economic values, any kind of values—because the work of a politician is to get things done in an environment where people do not agree. And so the way to get things done when people do not agree is to compromise.

And most people think that if a member of Congress is making a compromise, what they are compromising is their values, which is not the case, or they’re compromising their ideals, which might be the case because they’re not working in an ideal arena; they’re working in a political or a practical arena, and to get the desired results in one fell swoop is what does not happen. Those things generally happen incrementally. That takes legislation that has had input from all kinds of people, which is why they say it’s like making sausages. You don’t want to see how law is made because it has the appearance of people selling out their values when that’s not what they’re doing. They’re doing the necessary compromising work that politics is, and it is just not attractive.

Second, I try to tell people that every member of Congress is a human being like all the rest of us, and their job happens to be in Congress. Their job happens to be very stressful, very competitive, rather toxic, and all while they are separated from their families. So while a congressman’s working 12 hours of stressful, toxic, pressured work in Washington, D.C., they either go back to their apartment or some sleep in their office at the end of a stressful day. And there’s no family human contact for four or five days in a row. How many Americans want that kind of job? I am guessing not a lot.

When you are done being upset with politicians, then you say a prayer for them and ask God to bless them with what they need to do the right thing, whatever you think that is.

So if you have a political problem, go ahead and be upset with them. Go ahead and write to them or call them up or tell them—because that is the political process. But when you are done being upset with them, then you say a prayer for them recognizing how difficult their life and their work and all the rest of it is, and ask God to bless them with what they need to do the right thing, whatever you think that is.

We need to look in the mirror and realize our responsibility and settle down, be at peace internally with our life. And then look upon these people that upset us or the system that upsets us or whoever it is that upsets us and say: “Lord, send your peace upon those people who are doing their best. I think they’re screwing it up, Lord, but please help them to do their best and help me to have empathy and pray a blessing upon them because they have a difficult row to hoe.”