As Mexico’s president attacks his critics and the press, Catholic leaders warn against the danger of polarization 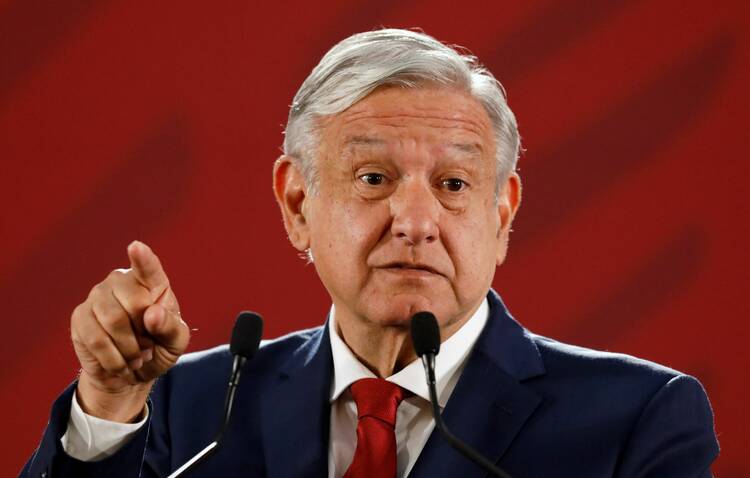 A Mexico City daily represents the neoliberal elite. A magazine has not “behaved well” with his government. A civil society group should be investigated for its alleged ties to adversaries of the government.

Two years in power, President Andrés Manuel López Obrador continues to dizzy Mexicans with his nonstop media presence. Every day at 7 a.m., Mr. López Obrador holds a press briefing at the National Palace in Mexico City. During these long briefings, often more than two hours, the national agenda is set for the day.

The press conferences also serve as staging ground for the various fights the president is constantly picking. Since he assumed office in December 2018, Mr. López Obrador has taken a decidedly confrontational approach with opponents, both real and imagined. He has taken on the private sector, civil society groups, the political opposition and, most notoriously, the nation’s press.

Any source of criticism, whether a journalist, another politician or a member of civil society, can count on a barrage of invective from the president, senior members of his cabinet and often from among the millions of the online followers of AMLO, as the president is popularly known.

Any source of criticism, whether a journalist or another politician, can count on a barrage of invective from the president and often from among the millions of López Obrador’s online followers.

The Catholic Church has been among the civil institutions worried about the polarization provoked by the president’s regular outbursts. In October, Desde la Fe, the magazine of the Mexico City archdiocese, published an editorial, “Let’s end the confrontation,” that argued: “The division and confrontations between those who think differently only leads to a war between brothers that is desirable to no one.”

The president has shown no evidence that he shares that concern. “The polarizing rhetoric is part of a worldwide phenomenon of political populism. You see it with [Recep Tayyip] Erdogan in Turkey, [Donald] Trump in the United States, [Jair] Bolsonaro in Brazil,” said Fernando Dworak, a political commentator in Mexico City. “It’s a common theme in these regimes—the constant creation of enemies to the cause.”

If Mr. López Obrador is to be believed, the enemies to his cause are legion. Swept into office on a wave of popular anger at corruption, criminal violence and a political and business elite seen as out of touch with the concerns of regular Mexicans, the president has made anti-corruption and the fight against inequality the core themes of his rhetorical flights. He calls his government “the Fourth Transformation,” a reference connecting it to the struggle for independence, the liberal reforms of the 19th century and Mexico’s difficult road to modernity after the Revolution of 1910-1920.

AMLO likes to call himself leftist and progressive and describes those who oppose him as members of the opposite end of the spectrum—conservatives, neoliberals and, on occasion, “fifi,” roughly meaning elitist and out of touch with everyday Mexican life.

“He is seeking to create a public opinion in which there are no alternatives to his government, in which the whole world is either with him or against him,” said Mr. Dworak.

“Polarization in Mexico isn’t a new phenomenon. It started with former president Vicente Fox, who called his opponents ‘vipers’ and ‘black rats.’

Among the president’s favorite and frequent targets are civil society groups, especially the media. Mr. López Obrador has singled out individual journalists and publications like the newspaper Reforma and the muckraking weekly Proceso, asking the latter to “pick sides” and accusing the former repeatedly of not being critical of previous administrations. Recently, the president revealed a list of media that received significant amounts of government money through advertising during previous administrations, suggesting that it made them biased toward his government.

Being singled out by the president invariably leads to a storm of harassment on social media. The president’s daily press briefings are watched by millions on YouTube and receive close attention from social media users friendly to the president.

Enduring the online abuse can be harrowing, especially in a country where journalists are frequently targets of violence, according to the Committee to Protect Journalists (where I am employed as C.P.J.’s Mexico representative).

“It’s something that happens every day. The president is constantly looking to provoke, and he has a lot of followers who listen to his every word,” Reyna Haydee Ramírez said. A reporter who covers the presidential beat for Pie de Págin, an independent news website, she often sharply questions the president—and suffers the wrath of his followers because of it.

Free-speech advocates are concerned about the president’s attacks on the press, which they compare to other populist leaders in the region like Mr. Trump and Mr. Bolsonaro.

“There are millions of people who say that the president represents them and who blindly follow him. They say any decision he makes is the right one,” said Ana Cristina Ruelas, a former director of the Mexico office of Article 19, advocates for freedom of expression.

If Mr. López Obrador is to be believed, his enemies are legion. He calls his government “the Fourth Transformation,” connecting it to the struggle for independence, the liberal reforms of the 19th century and Mexico’s road to modernity.

The president himself and senior members of his cabinet, as well as opinion makers sympathetic to his administration, have denied that Mr. López Obrador’s rhetoric is harmful. An AMLO spokesperson, Jesús Ramírez Cuevas, has repeatedly defended the president, arguing that the Mexican government does not impose any kind of censorship and that the president has merely exercised his personal freedom of expression.

“I believe that, even though it’s true that the president has the right to reply to criticism, this doesn’t mean that he can just disqualify what journalists are saying,” Ms. Ruelas countered. “What AMLO does is nullify journalists from a pulpit that is much larger than what the journalists have. He uses his pedestal to [silence] the messenger and make himself the only source of information.”

Crime rates in Mexico are higher than ever. Vigilante justice might make that worse.
Jan-Albert Hootsen

“Polarization in Mexico isn’t a new phenomenon,” the political commentator Genaro Lozano told America. “It started with former president Vicente Fox, who called his opponents ‘vipers’ and ‘black rats.’ He later tried to prevent López Obrador from competing in elections. AMLO benefited from that and made it his modus operandi.”

Mr. Lozano said that he does not believe polarization is necessarily a bad thing. “It helps to mobilize people.” But it also invites emulators from the right.

Mexico may be establishing the same polarized conditions that contributed to the ascent of Mr. Bolsonaro from the radical right in Brazil in 2018. The Brazilian president, a former military officer, has made aggressive confrontation with minorities, the press and civil society one of the hallmarks of his government. Mr. Lozano fears that if Mr. López Obrador’s party loses in 2024, “we’ll have a Mexican Bolsonaro.”

Political commentator Fernando Dworal said that he does not believe even that prospect will be enough to encourage Mr. López Obrador to change his rhetorical style. “He won’t dial it down,” he said. “He will continue to undermine all the public and non-public institutions, the judiciary and the media because he believes that his is the voice of the people.”

@Jahootsen
Provide feedback on this article
Join the conversation: Login or create an account
Before you can comment, you need to update your profile to include your first and last name, as required in our comments policy. Then reload this page and you'll be set up for commenting. Update your profile