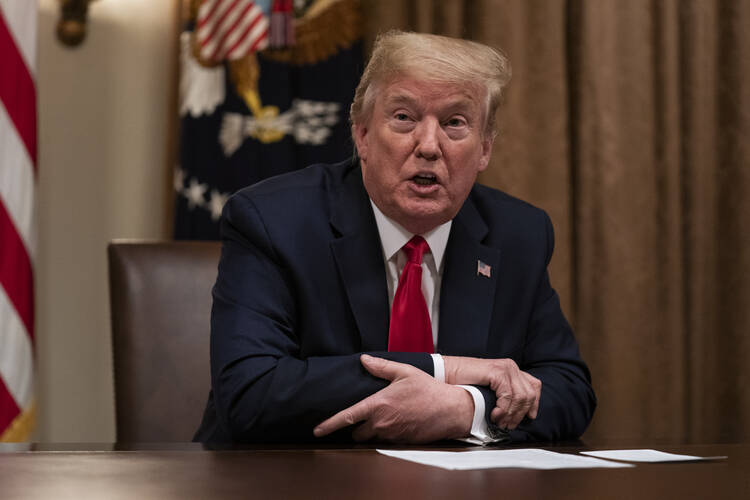 President Donald Trump speaks during a meeting with business leaders on coronavirus testing, in the Cabinet Room of the White House, Monday, April 27, 2020, in Washington. (AP Photo/Evan Vucci)

New York’s Cardinal Timothy Dolan appeared on the president’s favorite news channel on Monday, making the case that Catholic schools and nonprofits are in need of financial assistance and praising Mr. Trump for his leadership during the coronavirus pandemic.

“I really salute his leadership,” Cardinal Dolan said on “Fox & Friends,” adding that he also admired the leadership of New York Gov. Andrew Cuomo and New York City Mayor Bill de Blasio. “Everybody has really come through, but the president has seemed particularly sensitive to the, what shall I say, to the feelings of the religious community.”

The cardinal’s appearance on Fox News follows a weekend during which he praised the president on a conference call hosted by the White House with 600 other Catholic leaders and then prayed for Mr. Trump during a live-streamed Sunday Mass from Saint Patrick’s Cathedral.

The cardinal’s appearance on Fox News follows a weekend during which he praised the president on a conference call hosted by the White House.

On April 25, Cardinal Dolan, along with Archbishop José Gomez of Los Angeles, the president of the U.S. Conference of Catholic Bishops, and Cardinal Sean O’Malley of Boston, joined a conference call with President Trump that was supposed to be about Catholic education, the Catholic news site Crux reported. But the president pivoted to talk about abortion and the November election, calling himself the “best [president] in the history of the Catholic Church,” reported Crux, which obtained an audio recording of the call. Mr. Trump called Cardinal Dolan “a great friend of mine” and the cardinal said in reply, “the feelings are mutual, sir.”

On Saturday evening, Mr. Trump tweeted about the call and he said he would watch the next day’s Sunday Mass, which is being live-streamed from the cathedral during the pandemic. During the Mass, Cardinal Dolan acknowledged the president, quipping, “Our former neighbor up the street is worshiping with us” and quoting St. Paul, who exhorted Christians to pray for their leaders.

“And that we do,” the cardinal said, adding that he was “beseeching the almighty’s guidance and strength upon you in your administration.”

This weekend’s interactions between Mr. Trump and Catholic leaders come as the president’s re-election campaign has been courting Catholic voters. Earlier this month, the campaign announced the creation of a Catholic outreach group, highlighting the president’s record on abortion and religious liberty issues in an effort to reach voters in critical Midwestern battleground states such as Michigan and Wisconsin.

“Our former neighbor up the street is worshiping with us,” Cardinal Dolan said, later quoting St. Paul, who exhorted Christians to pray for their leaders.

Some Catholic leaders have been critical of Mr. Trump because of his anti-immigrant rhetoric, his efforts to dismantle the Affordable Care Act and his actions to undo environmental regulations and climate protection.

As recently as last week, top Catholic leaders released a statement criticizing the Trump administration for using the coronavirus pandemic as an excuse to enact hard-line immigration policies. In January, groups representing Catholic hospitals, social service agencies and U.S. bishops came out against a proposal from the Trump administration that they said will harm low-income Americans seeking medical care through Medicaid, calling it “a giant step backwards.” And last year, Catholic groups called the administration’s actions to remove the United States from the Paris Agreement on climate change “unconscionable.”

Exit polls showed that Mr. Trump and Hillary Clinton split the Catholic vote in 2016, with white Catholics going for Mr. Trump and Hispanic Catholics largely favoring Mrs. Clinton. Mr. Trump is expected to face off in November against former Vice President Joe Biden, who speaks frequently of his Catholic faith.

For their part, Cardinal Dolan and Mr. Trump appear to have formed something of a friendship.

Building government support for Catholic schools has been a goal of Cardinal Dolan and other Catholic leaders for many years.

During the 2016 presidential election, Mr. Trump and his wife, Melania, visited Cardinal Dolan about two weeks after an audio recording surfaced of then-candidate Trump bragging about sexually assaulting women. A few months later, the cardinal was one of several religious figures to pray at Mr. Trump’s inauguration. On Saturday’s call, the cardinal joked that he talked with the president more than he chats with his own mother.

Building government support for Catholic schools has been a goal of Cardinal Dolan and other Catholic leaders for many years. In 2017, he wrote an op-ed column in The Wall Street Journal urging the president to “push Congress to make scholarship tax credits available to working-class families.”

Cardinal Dolan, who served as president of the U.S. Conference of Catholic Bishops from 2010 to 2013, has also been routinely critical of the Democratic Party’s support for abortion rights, writing an op-ed for The Wall Street Journal in 2018 in which he argued that Democrats had abandoned Catholics.

“I’m a pastor, not a politician, and I’ve certainly had spats and disappointments with politicians from both of America’s leading parties,” the cardinal wrote. “But it saddens me, and weakens the democracy millions of Americans cherish, when the party that once embraced Catholics now slams the door on us.”

The cardinal has been critical of Mr. Trump’s anti-immigrant rhetoric, especially a White House policy to separate families at the U.S.-Mexico border. But Cardinal Dolan had praise for the president during his appearance on “Fox & Friends” on Monday.

The cardinal said Catholic schools faced an uncertain future because of the coronavirus pandemic. He said he thought most of them would be stable through the end of this academic year but that he was unsure about their long-term prospects. But he thanked donors and political leaders, one in particular, for their support.

“We’ve got heroic donors that have come through and we’ve got the promise of our leaders, and as I said, especially President Trump, who really showed a solicitude for Catholic schools, Catholic charities, Catholic health care,” Cardinal Dolan said. “Bravo.”