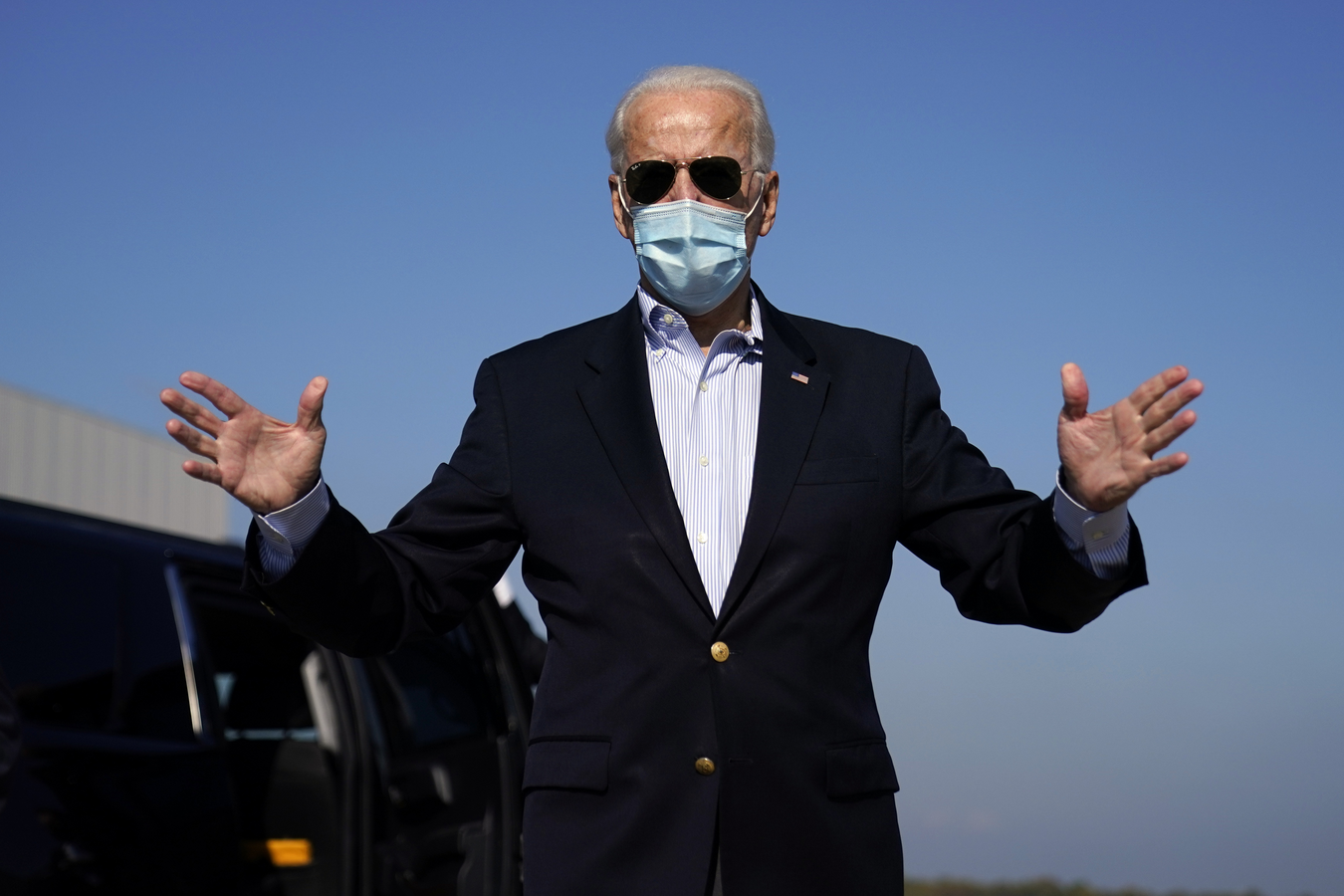 From the beginning of his campaign, former Vice President Joseph R. Biden Jr. framed his quest for the White House as “a battle for the soul of the nation.” After a period of vote-counting that continued into the weekend, Mr. Biden and his supporters won that battle, with voters electing him the nation’s 46th president, according to projections from the Associated Press. A lifelong Catholic who attended Mass on the morning of Election Day, Mr. Biden will be just the second Catholic to hold the presidency at a time when the Catholic Church in the United States, like the nation more broadly, remains bitterly divided.

“America, I’m honored that you have chosen me to lead our great country,” Mr. Biden tweeted on Saturday morning. “The work ahead of us will be hard, but I promise you this: I will be a President for all Americans—whether you voted for me or not. I will keep the faith that you have placed in me.”

Speaking late Friday night in Delaware, Mr. Biden signaled that he believed he was on track to victory, but added that all votes will be counted. He said the results demonstrate the American people had delivered his campaign “a mandate” to govern and urged unity.

“We may be opponents, but we’re not enemies. We’re Americans,” Mr. Biden said. “We have to put the anger and the demonization behind us.”

Despite projections that Mr. Biden has won the election, President Trump appears unwilling to concede. He claimed falsely on Saturday morning in a tweet that he had won the election “by a lot.” His campaign has filed lawsuits challenging the integrity of the voting process in several states and has promised even more legal action based on unsubstantiated allegations of voter fraud. On Thursday, some Republican lawmakers criticized President Trump’s unsupported claim that Democrats were trying to “steal” the election, saying Mr. Trump’s comments undermine the U.S. political process and the bedrock notion that all Americans should have their vote counted.

Mr. Biden’s victory adds a stunning twist to his political career, which many people assumed had ended when he decided not to run for president in 2016. But Mr. Biden entered the 2020 presidential race after pointing to the controversial 2015 “Unite the Right” rally in Charlottesville, Va., as evidence that Mr. Trump had enabled extremists and white supremacists. He faced off against more than two dozen other Democrats, many running well to his left on issues such as health care. Despite losses in early primary states, Mr. Biden’s campaign was revived following his victory in the South Carolina primary. In a highly unusual campaign season upended by the coronavirus pandemic, Mr. Biden focused on President Trump’s handling of the crisis, the need for racial reconciliation and a promise to recalibrate the presidency.

Joseph R. Biden Jr. framed his quest for the White House as “a battle for the soul of the nation.” On Saturday, Mr. Biden and his supporters won that battle.

Mr. Biden’s Catholic faith was also featured prominently, including in a video posted to social media the day before the election. In it, Mr. Biden said his faith reinforces his political views, which he said reflect “basic, fundamental American values.”

“You are your brother’s keeper. It really does matter what other people, what they’re going through,” the former vice president said. “I was raised to make sure that you look out for the other guy. Values of honesty, decency, treating people with respect. Making sure that, in fact, everyone is treated equally.”

[Matt Malone, SJ: What Joe Biden could do to heal our divided nation​​​​​]

As votes were being counted this week and the integrity of the election challenged by some of Mr. Trump’s supporters, many Catholic leaders stayed silent. But a group of 2,000 U.S. nuns signed a letter to President Trump calling for all votes to be counted.

“It may be frustrating that we do not know immediately who won our 2020 Presidential election. Nonetheless, democracy is worth the hard work and the wait. We must insist that our democracy can and does work. We will give the vote counting the time needed to ensure that we accurately count every vote,” read the letter, signed by Sister Simone Campbell, S.S.S., the head of the lobbying organization Network and a supporter of Mr. Biden.

Catholic supporters of Mr. Biden regularly highlighted how his faith helped him endure personal loss, such as the death of his wife and daughter in a 1972 car crash and later the death of his son in 2015 from cancer. Beyond his personal faith, Mr. Biden’s style of politics is reflective of a bygone era of Irish-Catholic good humor, which pundits said contrasted well with the current president.

Though it may take several days for polling to offer a clear picture of which candidate prevailed with various demographic groups, early exit polls from The Washington Post and NBC News suggest Mr. Biden won the Catholic vote. According to the Associated Press, Mr. Trump and Mr. Biden split the Catholic vote, with Mr. Biden capturing a majority of Hispanic Catholics (67 percent to 32 percent for Mr. Trump) and a larger share of white Catholics (42 percent compared to 57 percent for Mr. Trump) than Hillary Clinton won in 2016. Though Mr. Biden is himself a Catholic, his percentage of the Catholic vote is unlikely to come anywhere near what the nation’s first Catholic president received more than a half century ago.

In 1960, Senator John F. Kennedy won between 70 and 80 percent of the Catholic vote. But that kind of bloc voting among Catholics is a thing of the past.

Kathleen Sprows Cummings, the director of the Cushwa Center for the Study of American Catholicism at the University of Notre Dame, told America when it comes to how Catholics vote today, “It’s party over religion.” A major reason for that, she said, is the politics of abortion.

The 2020 election laid bare, Ms. Cummings said, “the extent of abortion becoming the single issue of all single issues” and a wedge among U.S. Catholic voters. While Mr. Biden largely shied away from culture issues like abortion on the campaign trail, Mr. Trump’s campaign highlighted his record appointing pro-life judges. But Ms. Cummings said that kind of reductive political thinking ignores the wide range of issues the church considers important. “We’ve got to find a way to move beyond this laser focus on one issue,” she said.

The 2020 election laid bare, Ms. Cummings said, “the extent of abortion becoming the single issue of all single issues” and a wedge among U.S. Catholic voters.

The unusual campaign season, upended by the coronavirus pandemic, lacked any major surprises around issues of faith. Mr. Trump’s visit to a Catholic shrine in June led to an admonition from Archbishop Wilton Gregory of Washington, D.C., and Mr. Biden’s support for abortion rights caused at least one priest last year to deny him Communion. But for the most part, faith was handled by targeted outreach efforts from both campaigns.

The Biden campaign urged “Catholic voters to support this ticket because we believe that it aligns with their common good values much more than we see with the current administration,” Josh Dickson, who led faith outreach efforts for the campaign, told America in September. Mr. Dickson said the campaign’s Catholic supporters regularly highlighted Mr. Biden’s commitment to such Catholic values as “social justice, loving our neighbors as ourselves, being our brothers' and sisters' keepers and working to ensure everyone has the chance to achieve their God-given potential.”

In the weeks leading up to the election, several Catholic surrogates hosted virtual events on behalf of Mr. Biden, including the comedian Jeannie Gaffigan, members of the Shriver family and Carolyn Woo, the former head of Catholic Relief Services. Other church leaders said Catholics could not vote for Mr. Biden because of his support for abortion rights, including a priest in Mississippi who said from the pulpit last month that “Joe Biden is an embarrassment to Catholicism” and a Wisconsin priest who suggested in September that Catholics who vote for Democrats would “face the fires of hell.”

But Bishop John Stowe, who heads the Diocese of Lexington, Ky., told America, “I think it’s pretty dangerous when each of us starts to narrow the definition of what a Catholic is or when we label somebody that we disagree with as ‘not Catholic’ or even telling somebody that being Catholic means you have to do something in a certain way.”

Bishop Stowe said the Trump campaign’s Catholic outreach “annoyed” him because it excluded a range of issues important to Catholics and seemed to focus solely on abortion.

“I don’t ever want to give the impression that we shouldn’t take abortion seriously,” he said. But he said Pope Francis has emphasized that governments should more broadly “recognize the dignity of the human person and work for the common good. Those should be the priorities in our politics.”

“I think that establishment of normalcy will allow many of us to breathe a sigh of relief,” Bishop Stowe said.

As for what the priorities of the new administration may encompass, the focus is surely to be on managing the ongoing pandemic while mitigating its effects on the economy. But Bishop Stowe said he hopes the Biden administration will follow through on its promises to enact comprehensive immigration reform, enhance the Affordable Care Act and reform the criminal justice system.

As for the political divisions among Catholics, simply having a president who is Catholic is unlikely to bridge the divide. Cultural acceptance of Catholics is astronomically higher in 2020 than in 1960, when Catholics by and large could take pride in the election of one of their own. As Ms. Cummings, the Notre Dame historian, put it, “Catholics on the right will not celebrate having a Catholic president [in Mr. Biden] for the same reason that Catholics on the left didn’t celebrate having another Catholic on the Supreme Court,” referring to the contentious confirmation process of Justice Amy Coney Barrett, the sixth justice on the court. “It’s party over creed.”

Bishop Stowe said that while he finds that reality a bit sad, he welcomes in a Biden administration what he hopes is a less volatile presidency.

“I think that establishment of normalcy will allow many of us to breathe a sigh of relief,” he said.

More Election Stories from America:
– Joe Biden will be the second Catholic president. Here’s what you need to know about his faith.
– Joe Biden has a mandate: to heal our wounded and divided nation
– Survey: Biden and Trump split the 2020 Catholic vote almost evenl

Provide feedback on this article
Join the conversation: Login or create an account
Before you can comment, you need to update your profile to include your first and last name, as required in our comments policy. Then reload this page and you'll be set up for commenting. Update your profile
More: Joseph R. Biden Jr. / Election 2020 / US Politics / Catholic Identity